Virus shuts many UK theaters but online the show goes on 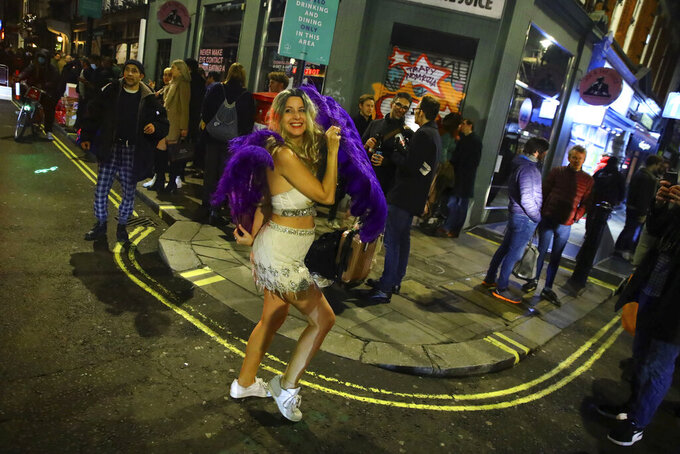 A woman dances with purple feathers in the West End of London after pubs close, before London moves into the highest tier of coronavirus restrictions from Wednesday as a result of soaring case rates, Tuesday Dec. 15, 2020. (Aaron Chown/PA via AP) 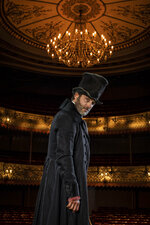 LONDON (AP) — When Andrew Lincoln steps onstage at London’s Old Vic Theatre as Ebenezer Scrooge in “A Christmas Carol,” he looks out on an empty auditorium.

The spectators are beyond the theater walls, in houses and apartments, staring at screens. In this pandemic year, the Old Vic’s seasonal production of Charles Dickens’ classic is being livestreamed nightly until Dec. 24, with ticket-holders around the world tuning in over Zoom.

“It’s a very strange experience, doing something theatrical on a stage and then not feeling the reverb of an audience,” said Lincoln, the British actor who starred for nine seasons in AMC zombie drama “The Walking Dead.”

But that is the reality of London’s West End this holiday season. The Old Vic is among theaters trying to keep the flame alive. But owners and producers warn that nine months of coronavirus-related curbs have left Britain’s performing arts on the brink — and a decision to shut theaters in the capital starting Wednesday may push them over.

Christmas is normally a golden time for British theaters. Families flock to see pantomimes — raucous seasonal shows combining fairy-tale plots with songs, satire and slapstick — and festive classics such as “A Christmas Carol.” Holiday-season revenue can carry venues through the rest of the year.

This year, more than half the U.K. population is under tight restrictions that have forced theaters, concert halls, art galleries, museums and cinemas to shut their doors.

That includes London, where theaters had just begun to reopen after a four-week national lockdown ended Dec. 2. Then, on Monday, the government slapped toughened restrictions on the capital because of a surge in infections.

Julian Bird, chief executive of industry groups the Society of London Theatre and U.K. Theatre, said the decision would cause "catastrophic financial difficulties for venues, producers and thousands of industry workers — especially the freelancers who make up 70% of the theater workforce.”

Ever since Britain went into its first lockdown in March, theaters have found ingenious ways to keep working. The Old Vic has mounted an “In Camera” season of plays performed on its stage and broadcast online. Other venues had begun to reopen to limited, face mask-wearing audiences, with social distancing measures in place.

Producers say there have been no virus outbreaks linked to theaters, and wonder why they have to close when large stores can stay open. Composer Andrew Lloyd Webber said it seemed “arbitrary and unfair” to ban theater performances while letting shopping continue.

Producer Sonia Friedman, whose show “The Comeback” was forced to close at London's Noel Coward Theatre just days after its opening night, said audiences “have left the theater uplifted, energized and reminded about the power of theater and the vital role it can play in the mental well-being of the community.”

“To have that so abruptly, cruelly and illogically ripped away is heartbreaking,” she said.

The government says it is supporting theaters out of its 1.57 billion-pound ($2.1 billion) Culture Recovery Fund.

The culture department said it had also earmarked 400 million pounds of contingency funding, “and will now use it to support organizations facing financial distress as a result of closure, as well as helping them transition back to fuller opening in the spring.”

The one glimmer of hope is that, as workplaces, theaters can continue creating and rehearsing. The Old Vic’s “Christmas Carol” is employing 80 people, including 18 actors and musicians.

It has been a challenge. Cast and crew are temperature checked daily and tested twice a week. Lincoln has been staying in London, away from his family, during rehearsals. The performers must remain 2 meters (6½ feet) apart onstage.

And yet, Lincoln says, the production retains the magic of Dickens’ story about a miser who mends his ways after being given a supernatural tour of his past, present and future. Playwright Jack Thorne’s adaptation has been a hit at the Old Vic for the past three Christmases. But this year it looked unlikely to return.

Speaking to The Associated Press over Zoom, Lincoln said the production came about “because (artistic director) Matthew Warchus was doing what we’re doing. Lots and lots of Zoom calls trying to save the theater and work out how the heck are we going to navigate this terrible year.”

Lincoln’s own plans, which include a “Walking Dead” movie, have been forestalled by the pandemic, though he hopes the film will start shooting in the spring.

“It does feel like there is a certain sense of positivity and the cavalry’s coming with the vaccines,” he said. “And there’s a real sort of sense of a renewal, hopefully.

“We just feel very fortunate that we’re all working in a theater at this time in history.”

He thinks the story of redemption and people’s dependence on one another has special resonance in 2020, when “the world’s been through this terrible year together.”

“It’s challenging, trying to rehearse for three weeks in masks,” he said. “(But) everybody’s come with such goodwill that we're just sort of throwing it out there and hopefully we’re going to make something that is exciting, thrilling, scary and very moving.

“It’s just a good thing we’re sending out into the world.”