As virus spreads, Kansas hospital runs out of staff 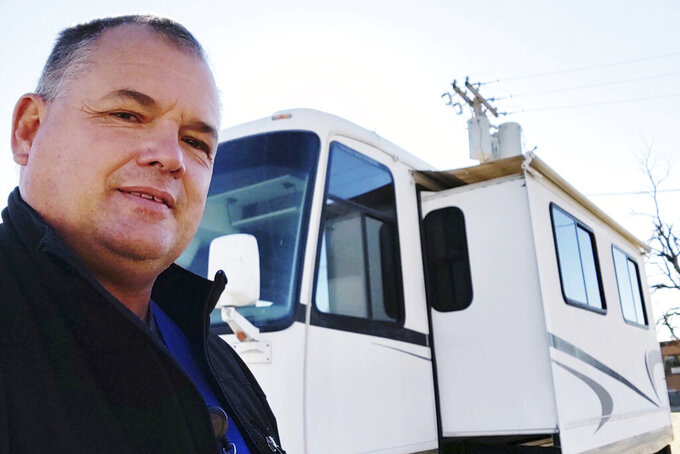 Eric Lewallen takes a photo of himself on Friday, Dec. 4, 2020, in La Crosse, Kansas. Lewallen, a radiology technician has been sleeping in an RV in the parking lot of his rural Kansas hospital because his co-workers are out sick with COVID-19 and no one else is available to take X-rays. (Eric Lewallen via The AP)

The radiology technician slept in an RV in the parking lot of his rural Kansas hospital for more than a week because his co-workers were out sick with COVID-19 and no one else was available to take X-rays.

A doctor and physician assistant tested positive on the same day in November, briefly leaving the hospital without anyone who could write prescriptions or oversee patient care. The hospital is full, but diverting patients isn’t an option because surrounding medical centers are overwhelmed.

The situation at Rush County Memorial Hospital in La Crosse illustrates the depths of the COVID-19 crisis in rural America at a time when the virus is killing more than 2,000 people a day and inundating hospitals.

The virus is sidelining nurses, doctors and medical staff nationwide, but the problem is particularly dire in rural communities like La Crosse because they don’t have much of a bullpen - or many places to send patients with regional hospitals full.

The staff shortages have forced people like Eric Lewallen, a Gulf War veteran and alfalfa farmer who moonlights as a radiology technician, to mount a last line of defense. To keep the hospital open, he had no choice but to start living in his RV in the parking lot because he needed to be on site as the only remaining healthy staffer to perform X-rays.

“I’m it,” Lewallen said shortly after begging the hospital laundry staff to start washing his scrubs because he had run out of clean ones.

“To keep a critical access hospital open, you have to have X-ray and lab functioning,” he said. “If one of those go down, you go on diversion and you lose your ER at that point. We don’t want that to happen, especially for the community.”

La Crosse, a town of 1,300 people that dubs itself as the “Barbed Wire Capital of the World” and is home to a barbed wire museum, is like many small towns struggling with the virus. Case numbers have soared, there's an outbreak at the nursing home, and its county has opted out of Democratic Gov. Laura Kelly’s latest mask mandate.

And there are few larger medical centers to send its sickest patients with the rest of the region also overrun by the virus.

The larger Hays Medical Center, which is just 25 miles (40.23 kilometers) away from La Crosse, was always willing to take patients that needed more advanced care in the past. But it turned away 103 transfers in November alone. In the 14 years prior, it had rejected transfers just twice, said Dr. Heather Harris, the medical director there.

Physician assistant Kai Englert was able to fill in for six days at La Crosse, overseeing several COVID-19 patients, one of whom died after no larger hospital would take the patient. The La Crosse hospital doesn’t have a ventilator and the oxygen it provided wasn’t sufficient with the patient's “chest full of COVID." But Englert doubts more advanced would have made much difference because the patient was so sick.

He said the message from large hospitals is: “We are not going to waste a bed on someone who is going to die anyway. They can die in a small town and that is the sad reality of the situation.”

In November, the hospital had to close its attached clinic and turn to a temporary staffing agency to keep the emergency room open after the doctor and physician assistant tested positive for the virus on the same day. The nurse practitioner was also out on medical leave. Currently, a certified nursing assistant is quarantining, and at least two other nurses tested positive previously.

The doctor and physician assistant returned Thursday after finishing their quarantine and were swamped with a backlog of patients.

Michael Cooper, the hospital’s CEO, said it was a stroke of luck that he could find anyone to fill in while they were gone given the level of strain on the state’s hospitals. According to the Kansas Hospital Association, 42% of them are reporting staffing shortages.

Cooper said he would like to have more nurses, too, because of the volume of patients the hospital is treating, but staffing agencies are charging $140 to $240 an hour. “That is more than I pay my doctor.” Instead he is encouraging overtime, which is up about 20 or 25%.

Some of the nurses have taken him up on the offer, working a week straight as the virus surges in the county of 3,300 residents.

“We just kind of piece it together,” said Jolene Morgan, a registered nurse who suspects she contracted the illness in September. She quarantined for 14 days, although she was never tested.

Lewallen, the radiology technician, acknowledges it might get worse but said everyone is working hard from the kitchen and laundry staff to the nurses. The veteran is trying to keep the proper perspective after his experience in the military.

“It’s not like anyone shooting at us or anything, so I am confident we will get through it alright. It will just be a tough spell for awhile," he said.