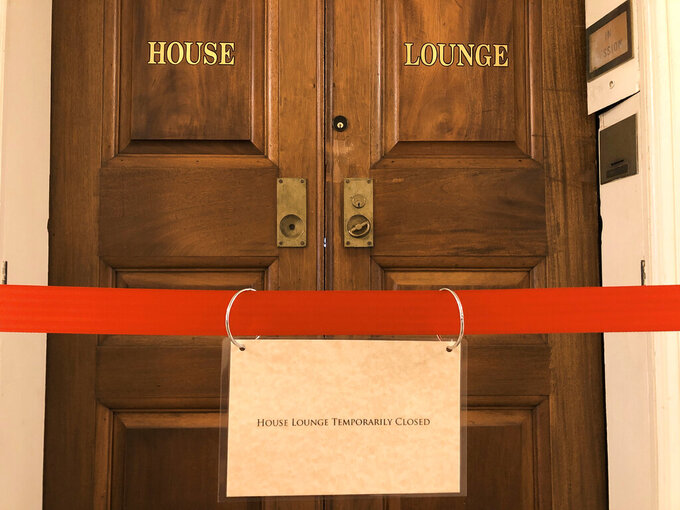 The Missouri House Lounge is cordoned off on Thursday, Jan. 21, 2021, at the state Capitol in Jefferson City, Mo. The room, which is a popular tourist site because of its ornate paintings, has been closed to regular tours due to COVID-19 concerns. The House canceled its session this week after a coronavirus outbreak. (AP Photo/David A. Lieb)

JEFFERSON CITY, Mo. (AP) — Missouri legislative leaders said Thursday that they are planning to open a rapid COVID-19 testing clinic inside the Capitol building, after the annual session began with an outbreak of the disease.

The clinic, led by a nurse, would be open to lawmakers, staff and others who regularly work in the Capitol, such as lobbyists and journalists, said House Chief Clerk Dana Rademan Miller. She said it hopefully will open within the next couple weeks.

Although discussions about a Capitol clinic have been ongoing for a month, the concept picked up steam after the Legislature opened its session Jan. 6 and soon started seeing COVID-19 cases. The House canceled its session this week and encouraged most staff to work remotely. The Senate remained in session.

Freshman state Rep. Lisa Thomas told The Associated Press on Thursday that she began experiencing COVID-19 symptoms on Saturday, just one day after she was last at the Capitol, and tested positive for the virus earlier this week. Thomas said she doesn't know exactly how or where she caught the virus.

"It’s very hard to say, but I would tend to think statistically it’s likely that it was at the Capitol,” said Thomas, a Republican from the Lake of the Ozarks area.

She is at least the third House member — along with Democratic Reps. Wes Rogers and Kimberly-Ann Collins — to confirm having COVID-19 since the session started. At least 11 other Missouri state lawmakers have had COVID-19 at some point during pandemic, according to an AP tally.

Missouri recorded more than 11,000 new COVID-19 cases in the past seven days, for an average of nearly 1,600 a day and a testing positivity rate of 12.2%. Those figures are about half of what they were a month or two ago.

Some coronavirus precautions have been taken in the Capitol. For example, public seating is limited in committee rooms. But legislators' desks remain next to each other in the chambers and are particularly close in the House. It's up to each lawmaker to decide whether to wear a mask. As the session began, most Democrats did while most Republicans did not.

Thomas said she generally had not been wearing a mask at the Capitol.

“Masks don’t keep you from having viruses transmitted,” she said. "It's like expecting a chain link fence to stop a BB, it’s not going to happen.”

Though virus particles can still get around or through basic cloth or disposable masks, the Centers for Disease Control and Prevention recommends that people wear masks in public settings to reduce the likelihood of spreading coronavirus to others.

The new coronavirus testing site is to be located in the Capitol basement in an office that, until now, had been used by University of Missouri journalism school students who cover state government. The university is having to find a new place for its students to work.

Senate Republican and Democratic leaders both expressed support Thursday for the coronavirus testing clinic. But Minority Leader John Rizzo, a Democrat from Kansas City, also expressed frustration that temperature screenings weren't conducted on people entering the Capitol this week, as they had been when the session began.

“I think keeping government running and open down here is probably essential to getting people back up and going on Main Street, Missouri," Rizzo said. "We want to do it as safely as possible.”

Legislative administrators met with members of Gov. Mike Parson's administration last week and decided to halt the temperature screenings because they were turning few people away and some people were declining to participate in them, said Mike O'Connell, a spokesman for the state Department of Public Safety.