Volkswagen lost $1.8 billion in Q2 but sees profit for year 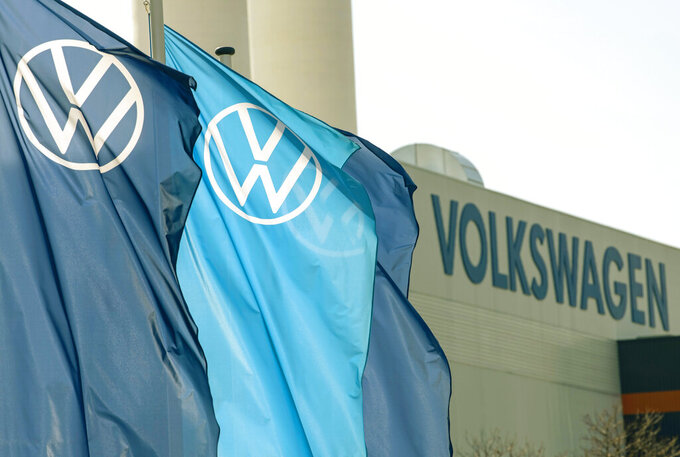 FILE - In this file photo dated Thursday, April 23, 2020, flags wave in front of a factory building during the production restart of the plant of the German manufacturer Volkswagen AG (VW) in Zwickau, Germany. Carmaker Volkswagen reports Thursday July 30, 2020, an after-tax loss of 1.54 billion euros (dollars 1.81 billion) in the second quarter as the pandemic shut down auto plants and closed dealerships. (AP Photo/Jens Meyer, FILE)

The company sold 35% fewer cars and cut back its proposed dividend but said it had been able to safeguard its cash reserves and would make an operating profit for the full year.

The loss compared to a profit of 4.1 billion euros in the same April-June quarter last year.

The company said the main reason for its lower profits was the sharp fall in customer demand. Chief Financial Officer Frank Witter said that “the first half of 2020 was one of the most challenging in the history of our company due to the COVID-19 pandemic."

“At the same time,” he said, “we introduced comprehensive measures aimed at reducing costs and securing liquidity early on, which enabled us to limit the impact of the pandemic on our business to a certain degree.”

The company said that the deliveries gap compared to last year was now narrowing each month, from being down 45% in April to 18% lower in June. It expects the drop be shrink to single digits in July.

It said it was able to expand its global share of the car market as the overall market contracted even more than the company's sales.

Net liquidity in the automotive division increased in the quarter to 18.7 billion euros due to measures taken to preserve cash and the placement of hybrid notes amounting to 3.0 billion euros. The company also amended its 2019 dividend proposal to 4.80 euros per ordinary share from 6.50 euros per ordinary share. The cutback will enable the company to transfer 855 million euros in retained profits to 2020's accounts.

Volkswagen said operating profits for 2020 would be “severely lower” than last year but “in positive territory.”