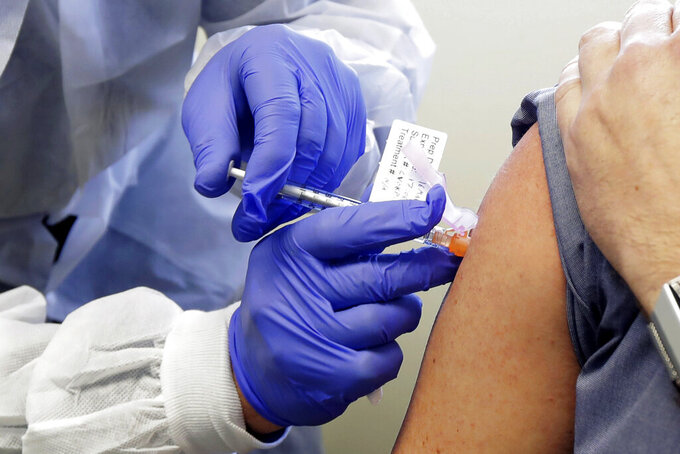 FILE - In this March 16, 2020, file photo, Neal Browning receives a shot in the first-stage safety study of a potential vaccine for COVID-19 at the Kaiser Permanente Washington Health Research Institute in Seattle. Moderna Inc., said Monday, Nov. 16, its COVID-19 vaccine is proving to be highly effective in a major trial. (AP Photo/Ted S. Warren, File)

Two COVID-19 vaccines might be nearing the finish line, but scientists caution it's critical that enough people volunteer to help finish studying other candidates in the U.S. and around the world.

If those early results hold up and U.S. regulators agree the shots are safe, emergency use of small, rationed supplies could start in late December. Other countries with contracts for early doses would undertake their own reviews.

But multiple vaccines will be needed to meet global demand and help end the pandemic, raising concern that studies that still need to sign up thousands of volunteers could run short if people wait for an already OK'd option instead.

Supplies aside, other COVID-19 vaccines under development may work differently in different populations and "we likely will benefit from having a menu of vaccine options,” Cutrell said.

Additionally, participants in the Moderna and Pfizer studies who originally got dummy shots would almost certainly be offered the real vaccine if the U.S. Food and Drug Administration allows emergency use. But no one knows how long protection would last, meaning those studies also must continue to track recipients somehow.

“It’s one thing to be effective two months after your last vaccination and another thing to be effective a year” later, said Dr. Jesse Goodman of Georgetown University, a former director of the FDA's vaccine division. “It’s going to be really important to complete these clinical trials and the trials of the other vaccines so we can make comparisons.”

The promising Moderna and Pfizer news bodes well for some of their competitors, said Dr. Anthony Fauci, the U.S. government's top infectious disease expert whose team at NIH helped develop the Moderna candidate.

Those shots target the “spike” protein that studs the surface of the coronavirus, and the early results prove that's enough to generate “a protective response,” Fauci said. “Conceptually this looks good” for other spike-focused vaccines made in different ways.

Here’s a scorecard of the frontrunners in the global vaccine race:

The Moderna-NIH vaccine and the candidate developed by Pfizer and its German partner BioNTech aren’t made with the coronavirus itself, meaning there’s no chance anyone could catch it from the shots.

Instead, the vaccines are made with a brand-new technology that injects a piece of genetic code for the spike protein. That messenger RNA, or mRNA, instructs the body to make some harmless spike protein, enough to prime the immune system to react if it later encounters the real virus.

There are no licensed mRNA vaccines for people, so scientists had no idea if or how well the COVID-19 candidates might work.

Both manufacturers are working to scale up production in factories in the U.S. and Europe. They can’t simply partner with other vaccine companies to take on some of the work because the technology is so different than the way most of today’s shots are made.

“It is not a very easy or quick swap,” said Moderna CEO Stéphane Bancel.

A different way to target the spike protein: Use another, harmless virus to carry the spike gene into the body. Once again, the body produces some spike protein and primes the immune system.

Britain’s Oxford University and AstraZeneca are making their version of this “viral vector” vaccine with a cold virus, or adenovirus, that normally infects chimpanzees. Studies of tens of thousands of people are underway in the U.K., U.S. and several other countries.

Johnson & Johnson is using a human adenovirus for its version, and is the only option in advanced U.S. testing aiming to show if a single dose rather than two would be enough.

China’s government authorized emergency use of CanSino Biologics’ adenovirus shots in the military ahead of any final testing. Russia likewise began offering an adenovirus vaccine ahead of late-stage tests.

Novavax makes its vaccine candidate by growing harmless copies of the coronavirus spike protein in the laboratory and packaging them into virus-sized nanoparticles.

There are protein-based vaccines against other diseases, so it’s not as novel a technology as some of its competitors. Novavax has begun a large final-stage study in Britain, and is set soon to begin another in the U.S.

Spike-focused vaccines aren’t the only option. Making vaccines by growing a disease-causing virus and then killing it is a tried-and-true approach — it’s the way Jonas Salk’s famed polio shots were made.

China has three so-called “inactivated” COVID-19 vaccine candidates in final testing in several countries, and has allowed emergency use in some people ahead of the results. An Indian company is testing its own inactivated candidate.

Safely brewing and then killing the virus takes longer than newer technologies. But inactivated vaccines give the body a sneak peek at the germ itself rather than just that single spike protein.