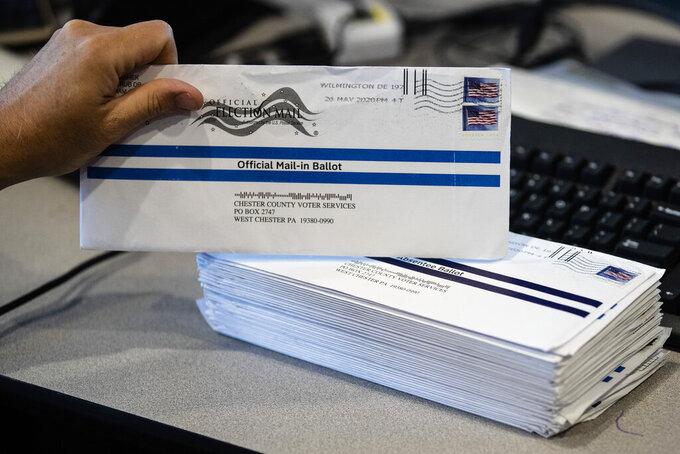 HARRISBURG, Pa. (AP) — Counting an avalanche of 1.4 million mail-in votes dragged through a third day in Pennsylvania on Thursday as some races from Tuesday’s primary remained too close to call.

Some counties had yet to report any mail-in ballot count, while others had reported a fraction of theirs. The Associated Press has not yet called a number of races where the contest was close or had a large number of votes yet to be counted, or both.

Those races included several where incumbent state lawmakers trailed in the count and the only competitive primary among the statewide races, a six-way Democratic primary contest for auditor general.

More than 1.8 million voters applied for a mail-in or absentee ballot, smashing expectations by state officials for the debut of the state’s new vote-by-mail law and drawing warnings that many contest results would be delayed. Voters returned almost 1.4 million of them, or 75.5%, according to information from the state's elections office Thursday.

Thus far, The AP has called four races in which incumbents lost, all of them in Democratic primaries for a state legislative seat.

Lawmakers had voted to postpone the primary election from April 28 to avoid the height of Pennsylvania’s spike in coronavirus cases, and candidates and political parties had urged voters to cast ballots by mail to protect themselves from getting infected.

The lack of drama in the outcome of the presidential contests and the massive mail-in vote produced light in-person turnout throughout the state.

Turnout hit 1.9 million, or 22% of Pennsylvania's 8.6 million registered voters. Meanwhile, deadlines to accept mailed ballots were extended into next week in Philadelphia and six counties that are home to a total of 3.8 million voters.

A judge in Delaware County rejected a challenge by the county’s Republicans to an order by Gov. Tom Wolf allowing the counting of mail-in ballots through next Tuesday as along as they were postmarked before the election.

Wolf, a Democrat, issued the order Monday for Philadelphia, Delaware County and four other counties under an emergency declaration in areas experiencing demonstrations over George Floyd’s death.