Voting focus could be legacy for latest wave of NBA activism 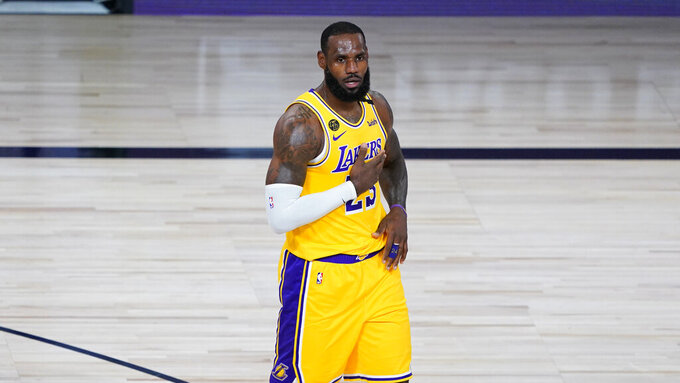 Los Angeles Lakers' LeBron James (23) reacts after a basket during the first half of an NBA basketball game against the Denver Nuggets, Monday, Aug. 10, 2020, in Lake Buena Vista, Fla. (AP Photo/Ashley Landis, Pool) 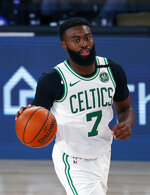 NBA players are building on the framework of Colin Kaepernick’s protests during the national anthem that helped raise awareness about police brutality, efforts that have permeated the league since it restarted its season in Florida last month amid the coronavirus pandemic.

But where Kaepernick’s demonstrations raised awareness, NBA players want their actions to move the needle further. But transforming the widespread embrace for social justice in America from a moment into a movement requires targeting systemic barriers and changing laws, not just mindsets.

One target has been voting, with initiatives such as the LeBron James-led More Than A Vote.

“We have some ears," James said recently, “and we will continue to push the envelope."

Pushing the voting envelope could provide a tangible legacy for today’s socially conscience players who want to transition symbolism into substantive change.

According to Pew Research Center, Black voter turnout saw a sizable jump during the 2018 midterm elections to 51.4%, up 10.8 percentage points since 2014. That's after declining in 2016 for the first time in two decades.

More Than A Vote is working to see that trend continue in 2020. So far, the main targets for the group have been helping to restore voting rights of ex-felons and the procurement of arenas in states in which access to voting venues and early voting has been restricted.

In states like Florida, for example, More Than A Vote donated $100,000 to local organizations that are helping to pay monies owed by ex-felons who can’t regain their voting eligibility until their fines and restitution are cleared.

The arena efforts go toward easing historical cynicism about a system that has tried to keep Black people from the polls and any concerns that a mailed ballot won’t get counted.

Teams in Atlanta, Charlotte, Detroit, and Sacramento have already signed on, with secretaries of state in Michigan, Ohio, Kentucky and New Jersey working to add more.

The efforts have inspired NBA players to use both their social media platforms and interview sessions inside the bubble to advocate not only for justice for Breonna Taylor, Ahmaud Arbery, George Floyd and others, but voting as well.

A lot of the efforts in Florida have been to ensure people do just that, though they began before players went inside the bubble.

It was back in February that James’ friend and business partner Maverick Carter reached out to Addisu Demissie, a political consultant who ran California Gov. Gavin Newsom’s 2018 gubernatorial campaign and Cory Booker’s 2020 presidential bid, with the idea of starting a politics-oriented nonprofit.

Those initial discussions were brought to a standstill in March when the coronavirus pandemic hit. Then the world quickly changed in a much different way following the deaths of Taylor, Floyd and Arbery.

As the three incidents incited protests and unrest erupted around the country, those initial discussions between Demissie and James’ team soon picked up in earnest.

“It just made it even clearer that this organization needed to exist, A, and B, it crystallized sort of what our mission would be about black political participation and black political empowerment,” Demissie said.

The group has sought to distinguish itself from past athlete-led efforts by focusing not simply on voting registration, but by eliminating barriers in the voting process. NBA teams like the Orlando Magic have also since announced their own voting initiatives.

Dr. Todd Boyd, a professor of critical studies at the University of Southern California, said while symbolic gestures such as having Black Lives Matter emblazoned on NBA courts and statements of social justice on jerseys certainly can support and lead to targeted action, they alone aren’t enough.

“It’s not the same as taking direct action,” said Boyd, who has written extensively on the study of race in sports and popular culture. “The objective of a sports league is always going to be bottom line and profit.”

It wasn't enough for James, who explained his decision not to wear one of the 29 NBA-approved statements on the back of his jersey during the NBA’s restart.

“I commend anyone that decides to put something on the back of their jersey. It’s just something that didn’t really seriously resonate with my mission, with my goal,” he said.

Len Elmore, who played in the NBA for 10 seasons and teaches a course at Columbia University on athlete activism and social justice in sports, is encouraged by players not relying solely on rhetoric.

“You use the system to your favor, to your benefit. And that’s what they’ve done,” said Elmore, who played in the league during the mid-1970s and early 80s and spent time as a broadcaster before going to Harvard Law School and becoming a district attorney in New York.

Elmore said More Than a Vote is “one of the more creative and more unprecedented types of actions in the spirit of obtaining social justice. The vote, has been critical over a number of generations ever since the securing of the Voting Rights Act. ... It’s time to use that system as much as anything else.”

Demissie said this is just the beginning.

“There’s a reason why we’re named More Than A Vote. Voting, is in many ways Step 1,” Demissie said. “It’s what we’re focused on in 2020. But once we’re through this election cycle, this organization is going to continue to exist and fight for justice.”