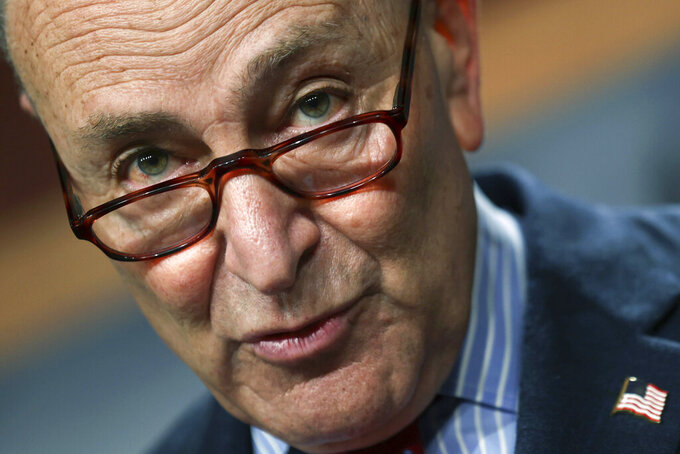 Far from hiding the expansive role of government emerging from President Joe Biden and Democratic control of Congress, Schumer embraced it. Leading the evenly split Senate, he stopped short of backing filibuster rules changes to advance the agenda. Still, the Democratic leader said coronavirus pandemic has shown that Washington has a role to play in shoring up the nation’s health, economic security and tacking the other priorities.

“Just go out there and talk to the American people,” Schumer said at a press conference at the Capitol.

“COVID has shown so many of the problems in our society," he said. "So yes, I believe that America is ready for big, bold comprehensive change. That’s what Joe Biden has proposed. His proposals are very popular. That's some of the things we’ve done.”

Congress is about to pause for a two-week recess after a violent and emotionally wrenching start of the new year. The deadly Jan. 6 attack on the Capitol, the impeachment trial of Donald Trump and ongoing pandemic restrictions have frayed relationships. Two elected GOP officials died of COVID-19, one before being sworn into office.

When senators return in April, they are poised for long and arduous debates over the agenda, and even the rules of the Senate.

Democrats are vowing action on several of their top priorities in April, including strengthening hate crime laws to include Asian Americans and restoring voting rights protections to combat minority voter suppression.

Schumer also said the Senate “must take action” on gun control legislation after two mass shootings this month, including one in Georgia that left six Asian American women dead.

Schumer said the Senate Judiciary Committee will hold a hearing on a voting rights bill named after the late Georgia Rep. John Lewis — a companion to broad legislation Democrats are considering that would be the largest overhaul of U.S. election policy in a generation. It would seek to restore elements of the Voting Rights Act that were struck down by the Supreme Court in 2013, a decision that Democrats say left minority voters vulnerable to disenfranchisement.

Conspicuously absent from the spring agenda is immigration legislation, reflecting how movement on the issue has slowed in Congress in the face of Republican opposition. Democratic momentum has also been hurt by the Biden administration’s struggle to handle the large and growing numbers of unaccompanied minors seeking to enter the U.S. from Mexico.

Looming over the agenda ahead is Biden's next big legislative priority, a $3 trillion-plus infrastructure package that will test what so far has been a wall of opposition to much of the White House's legislative program. All Republicans in the House and Senate voted against the American Rescue Plan, the coronavirus relief package.

Senate Republican leader Mitch McConnell said he was heading home to Kentucky to talk to voters about their “confusion and concerns” with the $1.9 trillion package.

McConnell said he also was planning to tell Kentuckians about what's coming next from Biden and Democrats in the infrastructure plan, which he mocked as a “sequel.”

The prospects of the bills Schumer promoted Thursday becoming law is distant, for now.

Republicans are broadly opposed to most of the Democratic agenda. Lacking the 60 votes needed on most legislation to overcome a filibuster, Schumer is planning to put legislation on the floor anyway and let Republicans go on record opposing it.

Democrats have discussed lowering that 60-vote threshold to get the legislation passed and some are pushing for such filibuster rules changes to happen now. It would take 51 votes in the Senate to change the rules. While Schumer reiterated Thursday that “everything is on the table,” such a decision is likely months away.

If Republicans won’t work with Democrats, Schumer said, “our caucus will come together, and we will discuss the best way to produce that big, bold action.”

A first test of the filibuster is likely to come with the massive voting rights bill, which is a top priority for Biden and Democrats in Congress.

Democrats see it as a forceful response to voting rights restrictions advancing in Republican-controlled statehouses across the country. It could shape election outcomes for years to come, striking down hurdles to voting, requiring more disclosure from political donors and bolstering election security and ethics laws.

Republicans are strongly opposed to the voting rights bill, arguing that it would tilt elections toward Democrats and take control of elections away from the states.

Yet on this and other legislation, Democrats are not only facing opposition from Republicans but also from some in their own ranks, threatening their ability to pass it even with changes to the filibuster. West Virginia Sen. Joe Manchin said Thursday he believes his fellow Democrats must focus on the parts of the legislation where they can work with Republicans.

“Pushing through legislation of this magnitude on a partisan basis may garner short-term benefits, but will inevitably only exacerbate the distrust that millions of Americans harbor against the U.S. government,” Manchin said in a statement.

Schumer did not offer a timeline on legislation dealing with immigration, raising the minimum wage and strengthening background checks for gun purchases. Senators are expected to huddle privately in the coming weeks to work through those issues. Sen. Ben Ray Lujan, D-N.M., said he had “optimism” after joining about a dozen senators for bipartisan talks on immigration legislation.

“I really appreciate the willingness of members from both sides of the aisle to get together and have a conversation —that’s how good policy gets put together,” he said.

Two bills that would expand background checks for gun purchases have already passed the House. While strengthening background checks is broadly popular among the American public, Senate Republicans have said they oppose the two House bills. Schumer said Democrats “want to pass the strongest bill that we can pass.”

Looking forward, Schumer promised that the Senate will also act on other priorities, including boosting broadband internet, combating climate change and reforming the U.S. Postal Service.