In VP search, Biden has a known quantity in Susan Rice 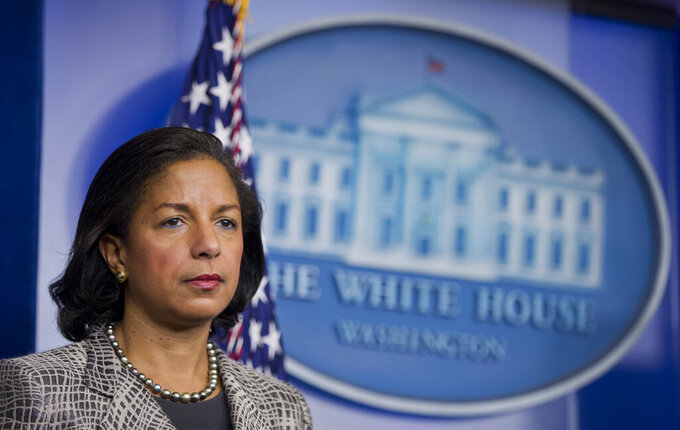 FILE - In this March 21, 2014, file photo National Security Adviser Susan Rice listens to reporters questions during a briefing in the Brady Press Briefing Room of the White House in Washington. Democratic presidential nominee Joe Biden is in the final stages of selecting his running mate. Among the contenders is Susan Rice, who worked closely with Biden in the Obama administration and regularly briefed him on pressing foreign policy matters when she served as national security adviser. (AP Photo/Manuel Balce Ceneta, File) 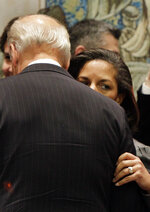 WASHINGTON (AP) — As then-Vice President Joe Biden left the West Wing each evening to head home, he often popped his head into national security adviser Susan Rice’s nearby suite of offices to check in — sometimes on pressing foreign policy matters, sometimes just to shoot the breeze.

In those casual visits, as well as in daily national security briefings, Biden and Rice forged an easy working relationship, according to people who worked alongside them during their eight years in the Obama administration. It’s that personal relationship, and Biden’s firsthand knowledge of how Rice would operate in close proximity to a president, that are now seen as among her strongest attributes as Biden considers her to be his running mate on the Democratic presidential ticket.

Rice was initially seen as a surprise candidate for the role. The 55-year-old has a long pedigree in foreign policy, but has never held elected office. She is close to former President Barack Obama and his network of policy and political advisers, but has a lower public profile than other women Biden is considering. She has also been a lightning rod for criticism from Republicans, who contend she put politics ahead of national security.

Yet Rice has quietly gained support among some Democrats in recent weeks as Biden’s advisers grapple with the enormity of what he would inherit if he defeats President Donald Trump in November. Rice is seen as a No. 2 who could shoulder much of the early workload on foreign policy while Biden focused on the COVID-19 pandemic and reviving the economy.

And though Rice briefly flirted with running for Senate from Maine this year, she’s seen as less likely to be eyeing the presidency herself — a bonus among some Biden advisers who worry about speculation that the 77-year-old Biden might only serve one term if elected. Some of Rice’s supporters also note she didn’t challenge Biden for the Democratic nomination in 2020, drawing a pointed contrast with Sens. Kamala Harris and Elizabeth Warren, who have also been vetted for the No. 2 spot.

But it’s the close working relationship Rice forged with Biden during the Obama administration that is seen as a key intangible that other contenders simply don’t have.

“His entire theory of politics is personal relationships,” Ben Rhodes, who served as Obama’s deputy national security adviser, said of Biden. “The idea of him taking a leap of faith on someone he really doesn’t know because it seems to check a political box seems very unlikely to me.”

Biden is in the final stages of selecting his running mate, and is believed to soon be holding in-person conversations with a short list of contenders. He’s said his running mate will be a woman, and is considering several women of color. Rice, who is Black, is among them.

Rice spent the first four years of the Obama administration as the U.S. ambassador to the United Nations. She commuted to Washington on weekends to be with her family, and sometimes offered the luxury apartment set aside for the UN ambassador to Biden and his wife, Jill, when they were in New York.

Rice was on track to become Obama’s second term secretary of state, but became ensnared in the political controversy over the administration’s handling of the 2012 attack on Americans in Benghazi, Libya. After Republicans vowed to fight her confirmation to the top State Department job, Rice bowed out of contention.

Obama instead named Rice his national security adviser, a powerful position that gave her regular, high-level access to both the president and vice president. She briefed Obama and Biden together in the Oval Office most mornings on the most crucial aspects of their daily national security briefings, and advised Biden on the foreign policy matters he led, including Ukraine’s efforts to combat Russian aggression and instability in Iraq.

“They’ve worked together closely on some of the most delicate issues a president has to deal with, on literally war and peace,” said Denis McDonough, who served as Obama’s chief of staff.

People who worked with Biden and Rice, some of whom insisted on anonymity to discuss private meetings and conversations, described them as something of an odd couple. Rice is seen as highly disciplined and can be brusque in meetings and deliberations. Biden, a lifelong politician, is verbose and more likely to make emotional connections even with strangers.

They were sometimes on opposite sides of foreign policy debates within the Obama administration, including during the Arab Spring. Rice advocated aggressively at the United Nations for authorization to stand up a no-fly zone and launch airstrikes in Libya; Biden has said he argued strongly against the campaign.

Both prided themselves on their willingness to give Obama blunt, unvarnished advice — and respected that about each other, according to the people who worked with them. But Biden and Rice also developed a lighter relationship, bantering back and forth in meetings and in the after-hours visits in Rice’s offices.

“They developed this kind of mutual respect, but also casual nature to their relationship that he didn’t have with everybody,” Rhodes said.

Biden and Rice got to know each other in the mid-1990s, when she was nominated to serve as assistant secretary of state for African Affairs in President Bill Clinton’s administration. At 32, Rice was one of the youngest people to reach that level of the State Department, and she was also pregnant with her first child.

When she arrived at her subcommittee confirmation hearing with her infant son in tow, Biden — then the top Democrat on the Senate Foreign Relations Committee — showed up to vouch for her and wish her well. They also worked together when Rice served as a foreign policy adviser to the 2004 presidential campaign of Sen. John Kerry, one of Biden’s longtime Senate friends.

But Democrats say Biden has kept an eye on Rice in recent months. In public appearances last year, she defended Biden’s work in the Obama administration on Ukraine at a time when it was under vigorous attack from Trump — and at a time when Biden’s candidacy appeared to be on shaky ground.

Biden, according to people with knowledge, took notice.