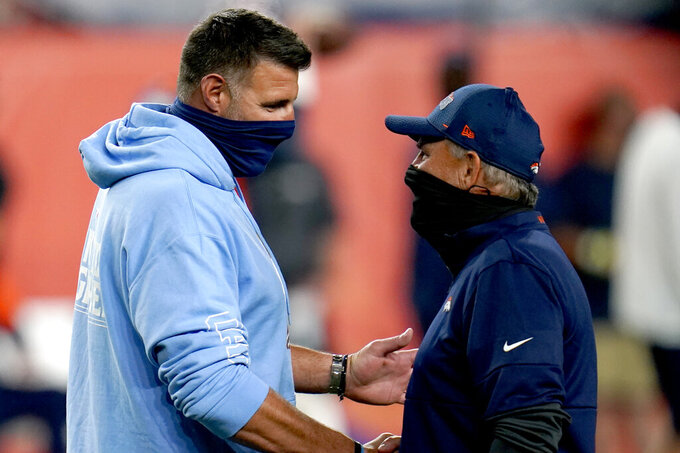 No manual exists on how to handle what the former NFL linebacker is dealing with in the midst of a pandemic, and the challenge of not letting an unexpected bye become a bigger setback.

Vrabel's approach to adversity is pretty simple: Try not to panic, assess the situation and do what's best for the team. He credits his role models and coaches for teaching him well, starting with his father, who was a high school basketball coach back in Ohio.

“Both parents were both educators, were both principals," Vrabel said. "I think spending eight years in New England playing for Bill (Belichick), certainly try to take that approach when things come up. You just deal with them and you put the team first and you figure out a way to get things handled.”

Vrabel has the Titans off to their best start since 2008 at 3-0, a much better beginning than his debut in 2018 when Tennessee lost the opener 27-20 in Miami in the longest game since the NFL-AFL merger in 1970 at 7 hours, 8 minutes. Vrabel also lost his top receiver in that game with Delanie Walker going out for the season.

That was nothing compared to what happened this week.

First, Vrabel and the Titans got to 3-0 with a 31-30 win in Minnesota without the defensive assistant who calls in plays during games. Vrabel helped fill in on defense with outside linebackers coach Shane Bowen left behind in Nashville after a positive COVID-19 test result hours before they left.

Then the NFL ordered the Titans to shut down their facility Tuesday following more positive tests for three players and five team personnel. Another positive test Wednesday pushed Tennessee's game with Pittsburgh back a day or two, then two more positive results Thursday forced a postponement until Week 7.

The outbreak increased to a total of 14 within the past week , with two more Titans' players testing positive Friday.

Suddenly, the Titans found themselves with an unexpected bye three weeks ahead of schedule while waiting for continued testing to learn when they can get back inside their building.

And Vrabel finds himself steering his team through a rapidly changing situation.

At least 12 members of the franchise have tested positive for COVID-19, and his job is to keep a team that played in the AFC championship game in January focused on trying to win the AFC South on the way to Tennessee's first Super Bowl berth since the 1999 season.

Vrabel, who had never been a head coach until January 2018 when the Titans hired him, is drawing on his life experience. He played at Ohio State, then with Pittsburgh, New England and Kansas City in the NFL. He started coaching as an assistant at Ohio State before joining the Houston Texans in 2014.

“There is just certain things that come up that you don’t plan for, sometimes you do plan for them, sometimes you don’t,” Vrabel said. “But I think that you just do the best job that you can and continue to try to lead the group of people that you’re charged to lead.”

Vrabel is 23-15 with the Titans, coaching in his own way, leading by being himself. That means putting on a pad to help players hone pass rush moves or trying to strip a ball from Derrick Henry in practice. Joking and jousting with reporters didn't stop Vrabel from making changes to best fit his schedule for the Titans.

The coach also has made clear family matters most, a message he's repeated this week — that caring for players, coaches, staff and their families was part of dealing with this outbreak.

“When you think of the Tennessee Titans, you think of Mike Vrabel and everything he believes in,” Vaccaro said recently.

Once the Titans are allowed back in their facility — hopefully Monday or Tuesday depending on further test results — Vrabel and his staff must work with new procedures from the NFL following their outbreak while getting ready to play Buffalo next.

Vrabel told his players to use the unexpected time off to prepare for a stretch of at least 13 straight weeks of games.

“We’ve won the games that we’ve played, which has put us in a good position,” Vrabel said. “We’ll have to play much better and continue to improve, but we have to use time now to our advantage that we’ve been given because of the situation.”