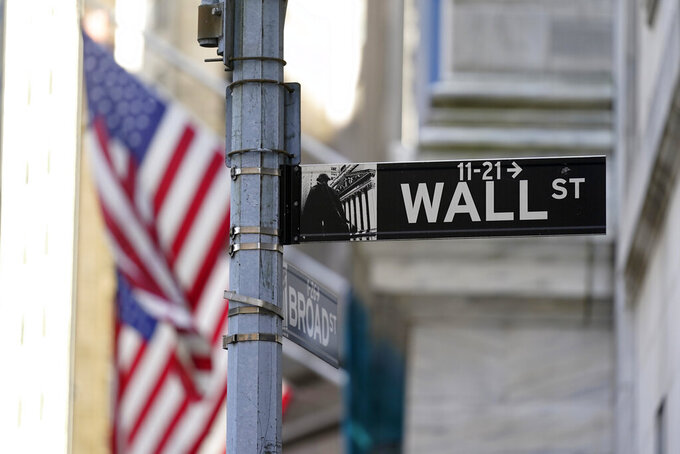 NEW YORK (AP) — Stocks finished higher on Wall Street Tuesday, nudging the S&P 500 closer to the record high it reached last week. The benchmark index added 0.5%. The Nasdaq did a bit better, climbing 0.8%, with an assist from gains in several big technology stocks. Markets were relatively calm through the Congressional testimony of Federal Reserve Chair Jerome Powell, who said he expects recent increases in inflation to subside soon. Consumer prices jumped 5% in May compared with a year earlier, the largest increase in 13 years. The yield on the 10-year Treasury note dipped to 1.47%.

NEW YORK (AP) — The S&P 500 is nudging closer to its record high on Tuesday, while the rest of Wall Street is drifting in mixed trading, as markets continue to calm following last week’s jolt from the Federal Reserve.

The S&P 500 was 0.4% higher in afternoon trading and back within 0.3% of its all-time high set two Mondays ago. It had dropped as much as 2.1% from its record after the Fed said it’s begun making plans to eventually offer less support to markets.

The Fed has been at the center of the market’s swirling over the last week, and Chair Jerome Powell is addressing a Congressional subcommittee hearing Tuesday afternoon on the central bank’s response to the pandemic.

In his prepared remarks, Powell said again that the Fed sees inflation accelerating, but it expects the burst to be only temporary. Prices have leaped for everything from used cars to restaurant meals as a rebounding economy gets hemmed in by shortages of supplies in some areas.

If the Fed is wrong, and if inflation does end up being a longer-lasting problem, it would force the central bank to get more aggressive about raising interest rates higher and faster off their record lows.

Markets are just getting used to the idea of the Fed making any moves at all. For more than a year, they've enjoyed investing on easy-mode as super-low rates propped up prices. Last week, though, the Fed indicated it may begin raising short-term rates by late 2023, earlier than expected. It also discussed easing up on programs meant to keep longer-term rates low.

Trading is likely to get bumpier through the summer as economic reports may give sometimes conflicting signals about inflation and other key data amid a recovering economy, said Katie Nixon, chief investment officer at Northern Trust Wealth Management.

“What investors are going to have to do is just buckle up,” she said. “The data is going to be very noisy; we could get some numbers that create some anxiety.”

The key, she said, is to stay calm and not overreact to any one signal or piece of data.

Markets are sitting close to their records, but that’s masked plenty of churning happening underneath the surface since the Fed’s announcement last week.

The market’s initial move was to send stocks lower and bond yields higher. But the reaction has diffused as investors focus more on the Fed’s saying that it still plans to keep up its support for markets for a while.

Longer-term Treasury yields have fallen back after their initial spike, for example. The 10-year yield dipped to 1.47% from 1.48% late Monday.

Shorter-term yields, which move more on expectations for Fed moves on the federal funds rate, have held onto more of their gains. The two-year Treasury yield fell back to 0.23% from 0.27% late Monday, but it’s still well above its 0.16% level from before the Fed's meeting.

In the stock market, companies whose profits most need a strengthening economy to flourish have swung out of and back into favor. They’ve been trading places with Big Tech stocks and other winners of the pandemic, which have seemed able to grow almost regardless of the economy.

GameStop rose 4.8% after the company said it had raised $1.1 billion after selling 5 million new shares to investors. The company captivated Wall Street earlier this year, after a band of smaller-pocketed investors piled into it together and sent its price way beyond what professional analysts said was reasonable.

In cryptocurrencies, prices continued to fall after Chinese banks said they would step up enforcement on a government ban.