Walmart looks to hire 50K more; Boeing gets another setback 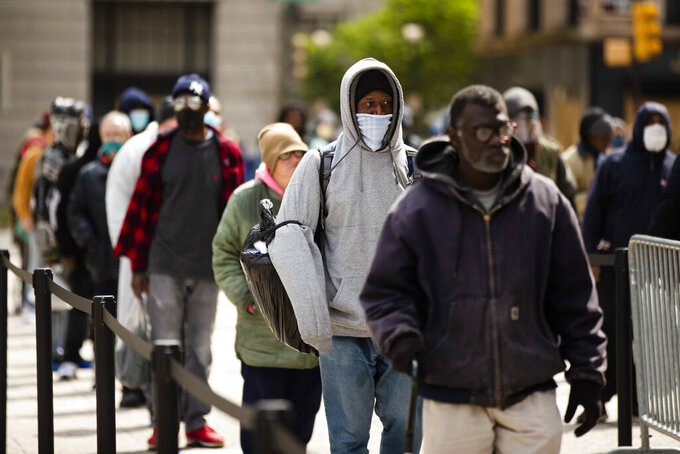 People wait in line to receive food as part of a new initiative called Step Up to the Plate, outside City Hall in Philadelphia, Friday, April 17, 2020. The program aims to help those with food insecurity and is a partnership of Broad Street Ministry, Prevention Point Philadelphia, and Project HOME, with the City of Philadelphia. (AP Photo/Matt Rourke)

CENTRAL BANKS AND GOVERNMENT: The coronavirus pandemic has skewered almost all economic models.

— Finland has slashed growth expectations. After projecting a 1% GDP expansion in 2020 GDP late last year, it now anticipates a contraction of at least 5.5%. Finnish economists say that retreat could hit 12% if lockdowns continue for another six months.

SOCIAL MEDIA DISTANCING: Social media companies have actively sought to quash misinformation that has led to dangerous behavior. This while the pandemic disrupts internal operations across the tech sector.

— Digital news publisher Vox Media, which is furloughing about 100 people, or 9% of its staff, without pay from May to July, and is cutting pay temporarily between 15% and 25% for those who earn at least $130,000. Salaries for both its CEO and president will be cut in half. The company, which publishes New York magazine and blogs including Vox, Eater and SB Nation, expects revenue declines in the tens of millions.

RETAIL PAIN: Darkened storefronts tell the story of what has happened to the retail sector and emerging economic data paints an even darker picture.

— In a letter to Congress, the Retail Industry Leaders Association, which counts among members Best Buy, Walmart and The Gap, asked Congress to allow furloughed and laid off retail workers to accept part-time work shifts without a reduction in state unemployment benefits.

— Walmart, meanwhile, says it plans to hire another 50,000 workers to meet surging demand for essentials after reaching its goal to add 150,000 new workers six weeks ahead of schedule. The nation’s largest private employer announced its hiring plans in mid-March and expected to complete the hiring at the end of May.

It says it received more than one million applicants for the mostly temporary or part-time jobs that could become permanent. It worked with more than 70 companies in the hospitality, restaurant and retail industry that have furloughed workers.

FEW FARE REFUNDS: U.S. airlines are splitting $25 billion in government aid payroll to pay workers and avoid massive layoffs as the industry has been hammered by the outbreak. But only two are offering refunds for passengers who cancel a ticket during the virus pandemic, according to a group of Senate Democrats who complained about airlines issuing travel vouchers instead.

The senators said Friday that airlines could be holding on to more than $10 billion by offering vouchers instead of paying refunds. Discount carriers Allegiant Air and Spirit Airlines said they offer refunds when the passengers cancel bookings. Hawaiian Airlines said it offers a refund if a passenger cancels first and the airline later drops the flight. The rest, including the biggest carriers — Delta, American, United and Southwest — only offer cash refunds when the airline cancels a flight, which is required by federal regulations, the nine senators said.

— Boeing suffered another setback over its 737 Max on Friday, as General Electric Co.’s aircraft-leasing arm canceled an order for 69 of the planes, which have been grounded for more than a year after two crashes. GE Capital Aviation Services referred to less need for planes by airline customers. Nearly two-thirds of the world’s passenger planes are grounded because of a sharp drop in travel during the coronavirus pandemic, and Boeing removed about 300 Max jets from its order book last month.

THE CAR BIZ: Manufacturing has come to a standstill and it is unknown when major industrial players will be able to restart plants.

— Ford Motor Co. now expects to post a $2 billion first-quarter loss. The automaker also floated $8 billion in bonds on Friday at interest rates ranging from 8.5% per year to 9.625%. They mature from 2023 to 2030. The company is raising cash to make sure it gets through the virus crisis. Ford’s U.S. factories have been shut down for about four weeks, cutting off the company’s main source of revenue. It is hoping to restart factories in the second quarter.

WORK IN A TIME OF PANDEMIC: The outbreak has disrupted the labor force in unprecedented ways, damaging livelihoods as well as supply chains.

— Four employees tied to a Tyson Foods poultry plant in southwest Georgia have died of complications from COVID-19. Three of the employees worked at a plant in Camilla, while the fourth person worked in a supporting job outside the plant, said spokesman Gary Mickelson. Two other Tyson Foods workers have died from the virus at its plant in Columbus Junction, Iowa, he said.

MARKETS: Stocks around the world rose on Friday as investors latched onto strands of hope about progress in the fight against the coronavirus.

First quarter organic sales jumped 10% in the U.S., and 6% globally.