Walz gets J&J dose as Minnesota opens up vaccine queue 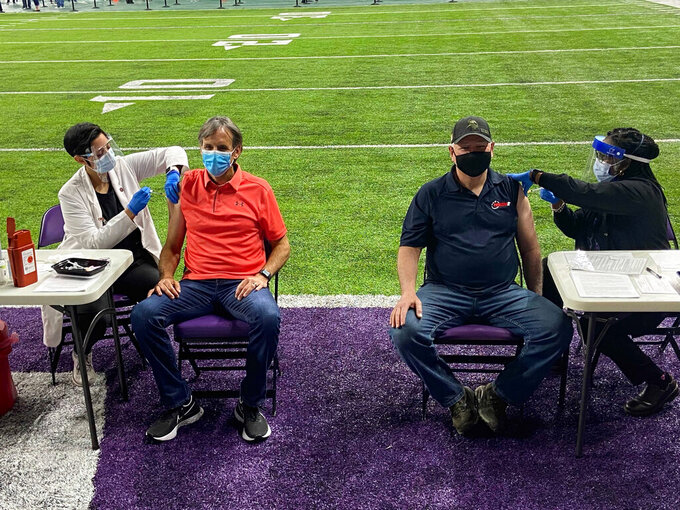 Democratic Minnesota Gov. Tim Walz, second from right, and former Republican Gov. Tim Pawlenty, second from left, receive doses of the single-shot Johnson & Johnson vaccine at a vaccination site at a Minnesota Vikings NFL football team practice facility, Tuesday, March 30, 2021, in Eagan, Minn. The governors received the vaccine on the first day the state expanded eligibility to all Minnesotans 16 and older ahead of an anticipated increase in supply from the federal government. (AP Photo/Mohamed Ibrahim)

MINNEAPOLIS (AP) — Gov. Tim Walz and former Gov. Tim Pawlenty each received a dose of coronavirus vaccine in a bipartisan display aimed at boosting acceptance of the vaccine as eligibility opened up to all Minnesotans 16 and older on Tuesday.

The Democratic governor and former Republican governor both received doses of the single-shot Johnson & Johnson vaccine at a vaccination site on Tuesday as the state expanded its vaccine eligibility guidelines to include all Minnesotans 16 and older. The expansion comes after a projected increase in the state's weekly allotment of doses from the federal government.

Minnesota eclipsed the milestone of one million of its people fully vaccinated on Tuesday as eligibility expanded, and more than 1.6 million have received at least one dose. Over the weekend, the state reported its two highest days on record for the number of vaccines administered, and health officials counted over 70,000 people who received a shot in the two days.

Walz and Health Commissioner Jan Malcolm said the state will be ramping up outreach efforts to expand access to the vaccine to underserved communities and combat potential vaccine hesitancy across the state. Pawlenty speculated that vaccine hesitancy from conservatives may come from a skepticism of the government and government programs, but urged that “these vaccines are safe, and incredibly helpful, and everyone should get them.”

“Minnesotans themselves can go on the internet and research through credible sources the fact that these vaccines are safe, and there should be no hesitation to get them,” he said.

Health Commissioner Jan Malcolm said Tuesday that the state has been receiving an average weekly allotment of 135,000 first doses for a few weeks before seeing a bump to 167,000 doses that arrived this week. The state is projected to receive another increase in next week's shipment to nearly 212,000 first doses, according to a health department spokesman.

The Minnesota Department of Health of Tuesday one more person has died due to COVID-19 and 1,278 new cases on Tuesday as the test positivity rate climbed above the caution threshold at 5.2%, indicating that the virus is spreading within communities. State health officials have warned that increases in hospitalizations and infections are also likely caused by more infectious variants of the virus.

The trend in Minnesota comes as President Joe Biden and top health officials warn that despite vaccines becoming widely available, Americans are declaring victory over the pandemic too early and letting their guard down against stopping infections. Minnesota health officials have urged people to continue following public health mitigation measures as the state races against the variants to vaccinate the population.