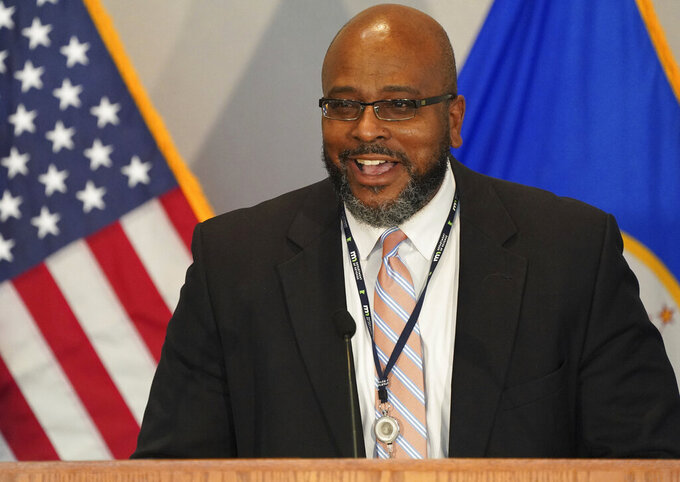 Minnesota Department of Revenue Commissioner Robert Doty answered a question from a reporter during a press conference to debut the state budget plan for the next two years Tuesday, Jan. 26, 2021 at the Department of Revenue building in St. Paul, Minn. (Anthony Souffle/Star Tribune via AP)

MINNEAPOLIS (AP) — Gov. Tim Walz proposed raising taxes on the wealthiest Minnesotans and large companies Tuesday to help plug a projected $1.28 billion gap in the next two-year budget, while calling for more spending on education and on helping the state recover from the coronavirus pandemic.

The Democratic governor's announcement set a starting point for months of debate at the Capitol and a likely crush of negotiations toward the end of the legislative session in mid-May. Republicans called his proposed tax hikes “hugely regressive.” They said his budget spends too much while failing to adequately address low test scores and achievement gaps in metropolitan-area schools.

“This is a starting point” Walz acknowledged at a briefing for reporters. “This is a budget that reflects Minnesota's sense that those who COVID hit the hardest, we need to help.”

The governor stressed that his proposed tax increases would hit only the top 0.7% of earners — and only companies that have profited amid the pandemic — while around 1 million families would actually see modest income tax cuts. He framed the income tax hike as “1% on the 1%," saying it wouldn't touch families earning less than $20,000 per week.

“We're asking those who have weathered this time relatively well to help out those who have not,” said Jim Schowalter, the governor's budget commissioner.

Walz's education proposal includes new spending of $745 million on primary schools, on top of federal aid of $649 million for helping schools bounce back from the pandemic. Much of the new education spending would be aimed at helping students catch up over the summer on learning they lost out on while studying from home. He also proposed $50 million for a forgivable loan program to help the hardest hit small businesses keep afloat and emerge from the pandemic.

The governor called for expanding the state's Working Family Tax Credit for over 300,000 eligible households. He revived a proposal for a one-time payment of up to $750 to about 32,400 working poor families who participate in the Minnesota Family Investment Program. He also included a previous proposal for paid family and medical leave.

On the revenue side, the governor proposed creating a fifth tax bracket for incomes over $1 million for a couple filing jointly. His office said 21,000 households would see an average tax increase of $8,072. He would raise taxes on capital gains and dividends on wealthier Minnesotans so that over 7,000 households would see an average hike of $30,000. He would raise the corporate income tax rate from 9.8% to 11.25%.

Walz would cut taxes for lower-income families by moving 1 million of them from the second to the bottom tax bracket. But lower-income Minnesotans would bear the brunt of his proposals to raise the cigarette tax by $1 a pack from the current $3.04, with a corresponding increase for snuff, and to start taxing vaping devices.

The governor's general fund budget totals about $52 billion, compared with the $48 billion budget the Legislature approved in 2019. It includes about $3 billion in reserves. To help put it in balance, he would carry over $217 million from the current budget, spend down the current budget reserve by $1 billion, and tap $130 million of the surplus in a separate reserve that ensures repayment of the debt on the Minnesota Vikings' stadium. He proposed just a modest $150 million in spending cuts, scattered across various programs.

GOP Senate Majority Leader Paul Gazelka, of East Gull Lake, urged tapping deeper into the state’s reserves and speeding up the vaccine rollout to allow businesses and schools to reopen, not more taxes and spending.

Senate Finance Committee Chairwoman Julie Rosen, of Fairmont, said her bill to cut 5% from most state agencies would save $222 million. Republicans have also proposed excluding civil unrest from events eligible for disaster funding. That runs counter to the governor's plan to borrow $150 million to help small businesses rebuild in neighborhoods of Minneapolis and St. Paul that saw rioting and looting amid the unrest over the death of George Floyd last summer.

“We are going to propose that we reduce spending now to help close the gap there, but if for some reason we can’t do that, we still have the reserves and resources we need to close that gap“ Gazelka told reporters. “We do not need to raise taxes on anyone, and that’s just a line in the sand that we’ve drawn.”