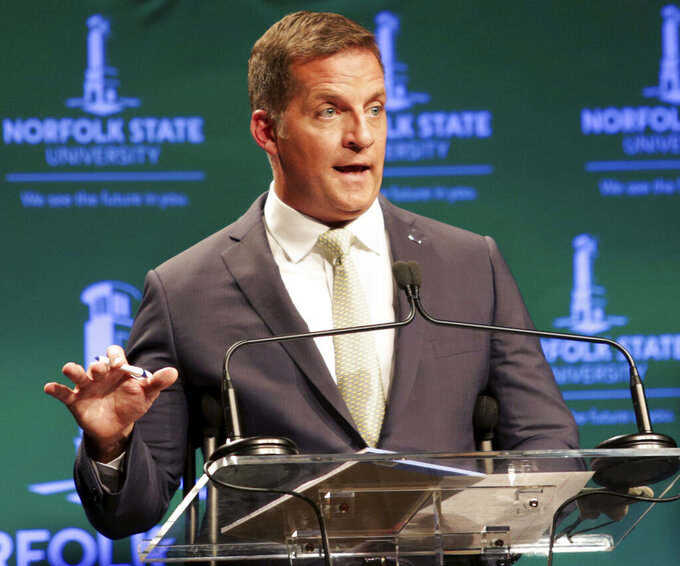 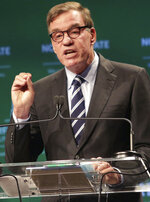 RICHMOND, Va. (AP) — Democratic U.S. Sen. Mark Warner of Virginia and his Republican opponent, Daniel Gade, clashed over topics including policing and coronavirus relief legislation but also found a number of points of agreement Saturday night during their second debate.

The event, held at Norfolk State University, focused on racial disparities and inequities. Gade, a political newcomer and retired Army officer, frequently attacked Warner as a career politician with little to show for his time in Washington. Warner, a former governor, emphasized his background in business and defended his accomplishments and experience, saying at one point, “Virginians know me.”

Although Warner is considered the heavy favorite to win reelection for a third Senate term representing Virginia, which has swung solidly blue in the Trump era, Gade has said he is undeterred by Warner's advantages.

No Republican candidate has won a statewide election in Virginia since 2009, and Democrats took full control of the legislature in January for the first time in a generation. Warner also holds a significant fundraising advantage over Gade, having raised nearly $10.6 million compared with Gade's approximately $983,000, according to the nonpartisan Virginia Public Access Project.

Gade repeatedly jabbed at Warner during the debate over his “no” vote on GOP coronavirus relief legislation, at one point calling Warner's opposition to the measure “stunning.” Warner said the measure wouldn't have done enough for struggling families and noted that it didn't get unanimous support from Republicans.

The two were also at odds over a question about whether police chokeholds should be banned.

Warner indicated yes, saying, “George Floyd would be alive, Eric Garner would be alive if there were prohibitions on chokeholds.”

The candidates, who were largely cordial and mostly adhered to time limits, found agreement on several issues.

Both said they would take a COVID-19 vaccine proven to be safe but agreed that such a vaccine shouldn't be mandated for children. Both raised concerns about the militarization of police forces around the country. Both agreed that the Black Lives Matter movement was about social justice, not sowing discord, and both said they do not support calls to defund police.

One portion of the event involved the moderators asking a series of questions directed only at one candidate, in which Gade and Warner were asked to defend past remarks or choices they had made.

Warner was asked why he didn't support a 2014 congressional effort to get the Washington NFL team to change its name.

“I probably should have weighed in earlier,” he said.

Gade was asked about a 2019 interview he gave in which he said families “being trapped in these nasty, failing public schools is a recipe for continued degradation across our society.”

Gade vigorously defended school choice, saying, “The most systemically failing thing for Black families is the fact that far too often they are trapped with no recourse in schools that are nasty and that are actually failing."

A professor at American University in Washington, Gade was seriously injured in Iraq in 2005, losing a leg after his Humvee was hit by a roadside bomb. He advised President George W. Bush on military and disability issues and was Trump’s appointee to serve on the Equal Employment Opportunity Commission, but withdrew his nomination after a lengthy delay in the Senate over his confirmation.

Warner, a businessman who co-founded the company that became Nextel, served as governor of Virginia from 2002 to 2006. He was first elected in 2008 to the Senate, where he now serves as vice chairman of the Select Committee on Intelligence.

Saturday's debate was the second of three planned before Election Day. Norfolk State and its Center for African American Public Policy partnered with TV station WAVY, The Virginia Bar Association and Visit Norfolk to host the event. Due to the pandemic, it was closed to the broader public with only invited guests allowed, according to the school.

The first debate was held last month, and the final debate is slated for Oct. 13 in Richmond.