Washington has 2-game streak but Steelers up next (probably) 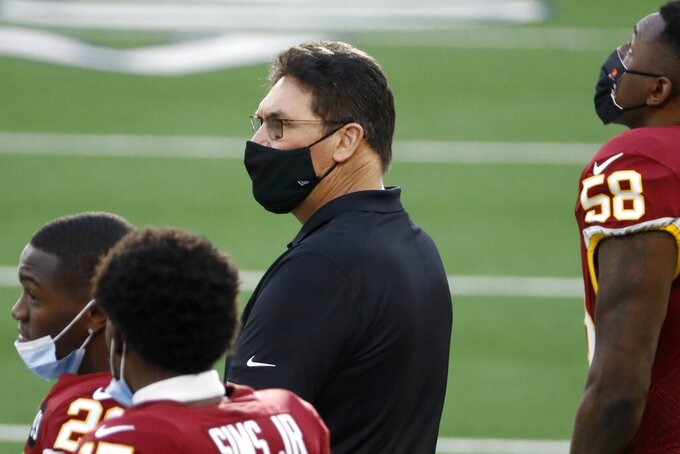 Washington Football Team head coach Ron Rivera stands by his team during the playing of the national anthem before the first half of an NFL football game against the Dallas Cowboys in Arlington, Texas, Thursday, Nov. 26, 2020. (AP Photo/Roger Steinman)

WASHINGTON (AP) — For the first time under new coach Ron Rivera, Washington is the proud owner of a two-game winning streak.

So what if those victories came against a pair of opponents (Dallas and Cincinnati) who are without their preferred starting QBs and are a combined 5-16-1?

And so what if the latest win, 41-16 at the Cowboys on Thanksgiving Day, came with some help from a foe in the form of highly questionable coaching?

Also of note: Pending the outcome of Philadelphia’s game against Seattle on Monday night, Washington was essentially tied for first place in the NFC East with the New York Giants.

So what if Rivera’s team is just 4-7 (and technically trailing New York because the Giants swept the rivals’ two meetings this season)?

The truth is, good news has been so scarce for so long for Washington, any shred of success seems like a big deal. Now, though, comes a stretch that should make clear whether it really makes sense to even consider the possibility of a division title.

First — as of now anyway, with the NFL pushing ahead amid a pandemic — comes a matchup rescheduled from next Sunday to next Monday at the Pittsburgh Steelers, winners of their first 10 games.

That is supposed to be followed by a game against San Francisco (5-6) and old friend Kyle Shanahan, who made it to last season’s Super Bowl. That game is being shifted to the Arizona Cardinals’ stadium, because the 49ers were forced out of their usual digs due to the COVID-19 outbreak.

The upcoming trio of games wraps up at home against Russell Wilson and the Seahawks, who started 7-3.

“These three teams certainly will be measuring sticks for us,” Rivera said Monday. “Right now, in the AFC, Pittsburgh’s the elite. Then we’re going to go up against San Francisco, who was the elite last year and they’re finding their way back. And then Seattle, who is one of the elite right now. So it’s going to be a good test. We’ll see how we handle it."

A defensive line anchored by No. 2 overall pick Chase Young and fellow first-rounders Jonathan Allen, Daron Payne and Montez Sweat. After four sacks against Dallas, Washington’s 36 rank second in the league; Sweat chipped in with a pick-6 of Andy Dalton.

Washington’s propensity to give up big plays: It has allowed nine of 50 yards or more; only one club in the entire NFL (the Chargers, 3-8) is worse, with 10.

Rookie running back Antonio Gibson is showing more and more signs of establishing himself as a consistent contributor. He was listed as a wide receiver in college at Memphis, although he also was used out of the backfield and as a kick returner. On Thursday, the third-round draft pick touched the ball on 16 of Washington’s initial 29 offensive snaps, finishing with 20 carries for 115 yards and three TDs, along with five catches for 21 yards. He’s scored 11 times, all on the ground. “The biggest thing with Antonio right now,” Rivera said, “is we’re seeing growth in many places.”

Cornerback Ronald Darby’s attempt to cover Cowboys wideout Amari Copper was a rare lowlight Thursday. Darby got beaten on a 54-yard touchdown pass from Dalton to Cooper early in the second quarter that put Dallas ahead 10-7. Darby also was called for pass interference while on Cooper in that period’s final minute, a 28-yard penalty that helped lead to a field goal.

Compared to the general injury-depleted nature of NFL rosters, Washington has fared fairly well. Free safety Deshazor Everett missed the past two games because of an injured ankle, with Troy Apke starting in his place alongside rookie Kamren Curl, a seventh-round draft pick who took over at strong safety when Landon Collins was lost for the season with an injured Achilles tendon. Morgan Moses has filled in capably at left tackle after three others at that spot got hurt; Moses’ usual job at right tackle went to David Sharpe.

0 — Total points for Washington on 11 game-opening drives, including a three-and-out possession Thursday.

With the way things are going, it’s hard to know what to expect with one item that usually is a known quantity: the schedule. So with the pandemic surging around the United States, there is no guarantee Washington will actually play at Pittsburgh on Dec. 7. “The biggest thing we told the guys was: Be ready. We’re coming back to work on Wednesday; just be ready for whatever happens,” Rivera said. “We’re kind of in that situation right now throughout the league. We’re kind of a touch-and-go.”