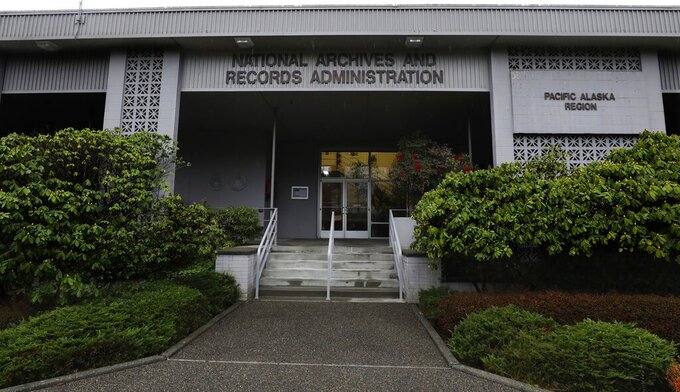 This Jan. 23, 2020, photo shows the National Archives on Sand Point, Wash., that has about a million boxes of generally unique, original source documents and public records. More than two dozen Native American tribes and cultural groups from the Northwest and Alaska are suing the federal government to stop the sale of the National Archives building in Seattle, a plan that would force the relocation of millions of invaluable historical records to California and Missouri. (Alan Berner/The Seattle Times via AP)

SEATTLE (AP) — Washington, Oregon, more than two dozen Native American and Alaska Native tribes and cultural groups from the Northwest are suing the federal government to stop the sale of the National Archives building in Seattle, a plan that would force the relocation of millions of invaluable historical records to California and Missouri.

The government is planning to sell the vast warehouse under a law aimed at unloading excess federal property, but the lawsuit filed in U.S. District Court on Monday says the building is anything but “excess.” It contains irreplaceable documents dating to the 1840s and is used all the time for research about everything from tribal history to Japanese internment during World War II and fur seal hunts on remote Alaskan islands.

“This is the DNA of our region,” Washington Attorney General Bob Ferguson told an online news conference Monday. “These are documents that are not digitized. Moving them a thousand miles away essentially and effectively eliminates public access to these critical documents.”

The National Archives building is one of a dozen properties around the country, collectively valued at $500 million to $750 million, identified for sale by the Public Buildings Reform Board. The board initially intended to sell the properties individually, but has announced that due to the COVID-19 pandemic's effect on the commercial real estate market, it will offer the buildings early this year for an expedited sale as a single portfolio.

The records would be moved to National Archives facilities in Kansas City and in Riverside, California.

The Seattle building has a reported $2.4 million maintenance backlog and costs more than $350,000 a year to operate, but sits on land that would be prime for residential development, with views of the Cascade Mountains and Lake Washington.

The sale is opposed by all eight U.S. senators and many representatives from Alaska, Idaho, Oregon and Washington.

“The records stored in Seattle’s Federal Archives are vital to telling the story of the Pacific Northwest’s history," Washington Sen. Patty Murray, the third-most-senior Democrat in the Senate, said in an emailed statement Monday. “I look forward to working with the incoming Biden-Harris Administration to explore every option available, including the appropriations process, to ensure that they remain accessible to local stakeholders.”

The lawsuit says the Seattle archives is ineligible for sale under the Federal Assets Sale and Transfer Act, which exempts buildings used for research in connection with federal agricultural, recreational or conservation programs. Among other things, the lawsuit noted, the archives are used for research under federal historical preservation programs and to litigate land use, water rights and conservation issues.

Neither the board nor the federal Office of Management and Budget, which approved the sale, immediately returned emails seeking comment Monday. In a brief interview with the Los Angeles Times last month, Talmage Hocker, a Kentucky commercial real-estate developer appointed to the board by President Donald Trump, claimed the archive doesn't get a lot of visitors.

“It can become a part of the community, as opposed to what it is today,” he said.

Ferguson and others said that comment demonstrated the board's ignorance of the archives' importance to the region. He noted his own late father, a local history buff, spent many hours there conducting genealogical and other research.

The documents include old property, military service and marriage records, court cases, census records from Alaskan villages before statehood, tribal rolls and treaties, and records of timber sales. There are 50,000 files related to the Chinese Exclusion Act, which limited the presence of Chinese laborers in the U.S. from 1882 until 1943, including photos and interrogations of Chinese immigrants.

Native American tribes have used the archives to win federal recognition, to establish their right to hunt and fish in their traditional lands, and to verify their oral traditions. The government's failure to consult with the tribes before deciding to sell the building violated federal policies, the lawsuit said.

“This generation is witnessing our history come to life with a resurgence of our language, our cultures, our songs, our dance, our tribal journeys,” said Fawn Sharp, president of Quinault Indian Nation on Washington's Olympic Peninsula. “We're just getting to a point of having a basic understanding of this rich and vast history. If this information were to ever leave the Pacific Northwest, it would be a loss not only to tribal nations, it would be a loss to the entire Pacific Northwest.”

In 2018 the documents were used to help secure the Congressional Gold Medal for Chinese American World War II veterans, said Connie So, president of the Greater Seattle chapter of OCA Asian Pacific Advocates, formerly known as the Organization of Chinese Americans.

The files also include key records from the internment of Japanese-Americans during World II — including documents that showed the National Archives building itself sits on land owned for decades by a family of Japanese American farmers, the Uyejis, who were sent to concentration camps in California in 1942. The Navy eventually took over the land and built warehouses on the property, which was never returned to the Uyejis.

Among the artifacts housed at the archives is a key to the family's front door, the lawsuit noted.