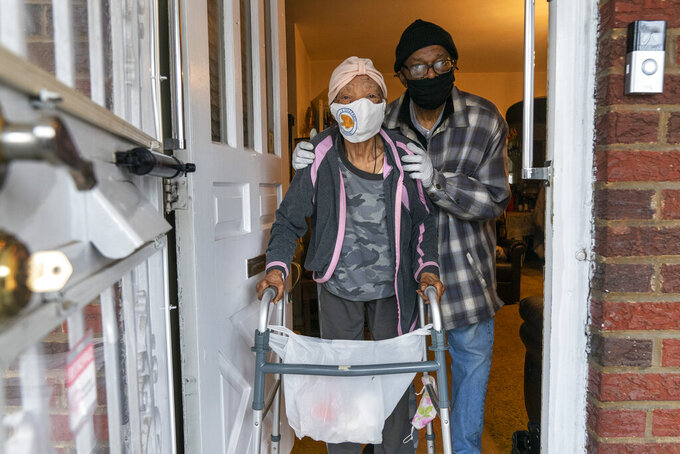 In this Wednesday, Feb. 10, 2021, photo Melvin Marriott, 69, poses for a photograph with his 93-year-old mother at the home they share in southeast Washington. Marriott has been unsuccessful in finding an appointment for himself or his elderly mother, who he cares for. "She's my priority," says Marriott. (AP Photo/Jacquelyn Martin)

WASHINGTON (AP) — Stately and deliberate, with a distinctive white streak in his black hair, the Rev. Wallace Charles Smith started his Valentine's Day sermon at Shiloh Baptist Church by talking about love and vaccinations.

“That's what love's all about. When you get a vaccination, you are saying to everyone around you that you love them enough that you don't want any hurt, harm or danger to befall them,” he said. “In the spirit of love, keep at it until you get your vaccination. That’s the only thing that’s going to erase this terrible scourge."

The church was empty except for a camera crew and a tiny choir. Thanks to COVID-19, Smith’s Sunday sermons are now virtual affairs.

Still, health officials in the nation's capital are hoping that Smith and other Black religious leaders will serve as community influencers to overcome what officials say is a persistent vaccine reluctance in the Black community. Smith and several other local ministers recently received their first vaccine shots.

Black residents make up a little under half of Washington’s population, but constitute nearly three-fourths of the city's COVID-19 deaths. The District of Columbia is now offering vaccinations to residents over age 65, but numbers show that seniors in the poorest and blackest parts of Washington are lagging behind.

Officials partially blame historic distrust of the medical establishment, especially among Black seniors, who vividly remember medical exploitation horrors such as the Tuskegee syphilis study, where hundreds of impoverished rural Black men suffered syphilis effects with minimal treatment for decades as part of the medical study.

The D.C. government is giving priority for vaccine registration to predominantly Black ZIP codes and running public information campaigns, including the clergy vaccinations. The latest numbers show the gap is narrowing, but the southeastern core of the city's Black community is still getting vaccinated at the slowest rate.

“There's distrust in our community. We can't ignore that,” said Rev. James Coleman of All Nations Baptist, who was vaccinated along with Smith. “The church, and particularly the Black church, is essential. ... That's what pastors do.”

Coleman said he has worked to create a vaccine-positive atmosphere among the seniors in his church. Before a recent Sunday morning sermon, conducted via audio conference call , elderly parishioners in Coleman's church updated one another on their progress and congratulated those who had been vaccinated.

“There was some nervousness to overcome at first,” Coleman said. "People outside the Black community sometimes can't relate to that sensitivity.”

Health departments nationwide are dealing with the same challenges, and other jurisdictions also are calling on religious leaders to help dispel vaccine fears.

“Our role as clergy and as faith-based leaders is to be optimistic and hopeful. We say to our people that these vaccines are the gift of life. We believe in the science,” said Rev. HB Holmes Jr. of Bethel Missionary Church in Tallahassee, Florida.

Holmes has gotten vaccinated, and his church has hosted vaccination drives.

“We knew that because of hesitation and reluctance that we needed trusted voices. So we brought together persons of great influence in Black and brown communities, particularly from our community, to say, you know, I’m going to take the vaccine and roll up our sleeves and do that publicly." he said.

In Washington, the Pennsylvania Avenue Baptist Church has been designated a “faith-based vaccination partner,” with a portable vaccination trailer set up in the church's parking lot twice a week. The vaccinations have gone smoothly. But showing that vaccine skepticism transcends racial lines, a white D.C. resident, Kathy Boylan, crossed the city on a recent icy day to stand on the sidewalk outside the church with a sign saying “Danger: COVID Vaccine Say No!”

Prominent Black Washington figures such as Vice President Kamala Harris, local radio host Kojo Nnamdi and Doug Williams, a Super Bowl-winning quarterback for the Washington football team, have all received their injections at southeast Washington's United Medical Center and used their public platforms to encourage others to follow suit.

“I honestly believe that more people want to take it than don’t,” said hospital official Toya Carmichael, who said several people have asked for the same nurse that vaccinated Harris.

But some D.C. officials are insisting that simple cultural reluctance, while real, doesn't fully explain Washington's racial vaccination lag. Interviews with Black residents revealed a common set of complaints: seniors failing to navigate the online registration system or sitting on hold only to be informed that all appointments had been filled.

Lisa Chapman had to overcome both personal reluctance and logistical obstacles in order to schedule vaccinations for her parents, Walter Coates, 82, and Rosa Coates, 80.

First she had to persuade them.

“I just wasn’t certain. I wanted to wait and see for a while,” said Rosa Coates. ”But (Lisa) convinced me. She just kept talking to me about it.”

Then it took waiting on hold for more than 90 minutes, leaving the phone on speaker and then leaping back on when a human answered.

“That's a really long time to wait. I think a lot of people do want to get it. They just can't get through,” Chapman said.

D.C. Council Member Kenyan McDuffie laid part of the problem at the feet of the government. In an interview, McDuffie, who represents southeastern Ward 5, called the city's vaccine rollout “overwhelmingly inequitable” and said talk of vaccine reluctance was obscuring a reality of vaccine frustration, made worse by the digital divide.

Smith, in his Valentine's Day sermon, spoke not just of the fear but also the logistical hassles of a confusing process.

"I know many of you have tried to get the vaccine, but there have been so many challenges ... waiting for hours, only to find that what you thought was available is not there,” he said.

Given the community reluctance, city health officials say they cannot afford to frustrate or discourage those seeking vaccination.

Nesbitt said a new registration model would go into effect in March that would bring a further “equity lens” to the vaccination process. Also, officials have organized teams of “senior vaccine buddies” to go to the homes of seniors and help them get through the online process.