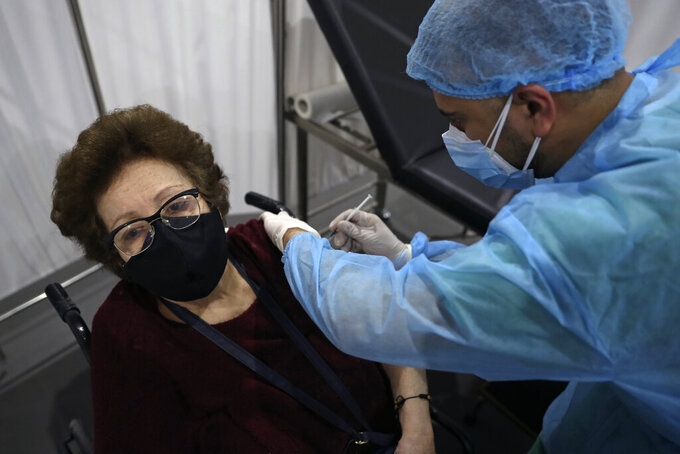 A woman receives a Pfizer COVID-19 vaccine at Saint George Hospital University Medical Center, in Beirut, Lebanon, Tuesday, April 6, 2021. Human Rights Watch, a leading rights group, said that Lebanon's vaccination campaign has been slow and risks leaving behind some of the country's most vulnerable people, including Palestinian and Syrian refugees, as well as migrant workers. (AP Photo/Bilal Hussein)

BEIRUT (AP) — Lebanon’s vaccination campaign has been slow and risks leaving behind some of the country’s most vulnerable people, including Palestinian and Syrian refugees, as well as migrant workers, a leading rights group said Tuesday.

Human Rights Watch said only 18% of Palestinian refugees and 17% of Syrian refugees eligible for vaccines have gotten their shots, many citing either lack of information about vaccine access or fear of security measures as a reason for not registering to get the vaccine.

By comparison, 24% of registered Lebanese have been vaccinated amid vaccines shortages.

“The entire vaccination campaign is slow and opaque, but refugees, migrant workers are lagging behind even more,” said Aya Majzoub, a Human Rights Watch researcher for Lebanon.

The small country of about 6 million is facing its worst economic and financial crisis to date, with tens of thousands out of work, basic food prices soaring, and more than half the population now living under the poverty line.

Lebanon has so far registered over 480,000 coronavirus cases and more than 6,000 deaths — including 239 Syrian refugees. A surge in infections prompted authorities to keep a nationwide lockdown for weeks.

Security fears among refugees over Lebanon's restrictive residency policies caused many to be hesitant. According to the New York-based group, only 20% of an estimated 1.5 million Syrian refugees in Lebanon have the legal right to live here, leaving many afraid of arbitrary detention or arrest if they register for vaccines through a government-managed platform.

So far, Lebanon has received almost 297,180 doses of the Pfizer vaccine, funded by the World Bank and 33,600 doses of the AstraZeneca vaccine through the U.N.-led COVAX program that provides for lower-income countries.

HRW urged the Lebanese government to make it clear to refugee groups that refugees “will not be arrested or deported if they register” for vaccines on a government platform, Majzoub said.

Nearly 200,000 Palestinian refugees living in Lebanon face widespread discrimination and are barred from government services, including health care. Many who spoke to HRW said they have little trust in the registration process and fear they would still be asked to pay a fee for the free vaccine.

Similarly, migrant workers, who work under a restrictive sponsorship system, said they have little information on the vaccine.

The government's vaccination campaign was widely criticized when lawmakers jumped the line, receiving vaccines in secret before designated priority groups. To speed up delays, the government has allowed the private sector to secure 1 million doses of the Russian vaccine Sputnik.

Private companies and civil groups can also apply to purchase vaccines and politicians are buying vaccines for their constituents.

“This also means that refugees and migrant workers," with no one to pay for their shots will again “be left behind,” Majzoub said.