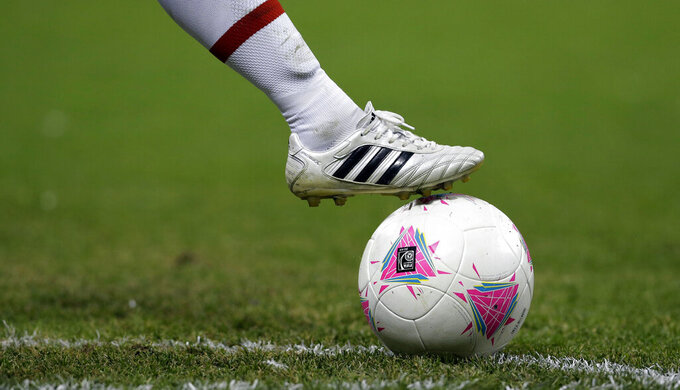 FILE - In this Tuesday, July 31, 2012 file photo, a player touches the ball during the women's group F soccer match between Japan and South Africa, at the Millennium stadium in Cardiff, Wales, at the 2012 London Summer Olympics. England has begun a month-long lockdown to curb the spread of the coronavirus and that is especially frustrating for Wales national team player Helen Ward. Most sports are on hold but “elite” leagues like the Premier League and Women’s Super League can continue. Ward is the all-time leading scorer for Wales but she plays for Watford in England’s third division, which falls into the "non-elite" category. (AP Photo/Luca Bruno, file)

Through the years, Helen Ward's ability to find the net for Wales' national soccer team has been stellar — elite perhaps.

But the team's all-time leading scorer plays for Watford in England's third division, which falls into the “non-elite” category under the country's month-long lockdown. That means no league games or team training sessions until early December.

Wales has an important European Championship qualifying game scheduled for Dec. 1, but Ward and some Welsh teammates playing in the third division will need to stay sharp on their own.

“It was just a bit disappointing to look at those that are considered elite and then us to not be, and there's not really too many differences other than the name of the league that they play in,” the 34-year-old Ward told The Associated Press.

The Women's Super League — featuring clubs like Chelsea and Manchester City — and the second-level Championship have elite status. Like the top divisions of the men's leagues, they'll continue playing through the lockdown that took effect Thursday.

The fully professional WSL aside, Ward sees few differences between clubs like Watford and those in the Championship. They train the same number of days per week and have similar COVID-19 protocols, she said.

“To label some people as elite and not others when there's not too much difference is a bit tough to take,” she said.

Ward said she respects the government's goal of stopping the spread of the coronavirus. Britain has the worst death toll in Europe, with more than 47,700 dead.

“There had to be a line drawn somewhere and unfortunately for us it’s been drawn just above our heads, it seems,” she said.

The government used a three-month lockdown earlier this year to get cases under control.

“It is just 28 days,” Johnson said at a news conference Thursday. "If we work together on this package of measures that we’re starting today, I have no doubt we can make a real, real impact.”

Not everyone is complaining, however.

Just north of Liverpool, the Marine soccer club is one of 10 non-elite teams still alive in the FA Cup. They'll have elite status for as long as they're in the tournament.

“To have an FA Cup run for a team like Marine is an absolute godsend, and to be categorized as an elite club is a sort of an added bonus,” club chairman Paul Leary said.

Earlier, their non-elite status meant they could allow fans into league games. The elite leagues are playing without spectators.

“At least we had some matchday income in terms of gate receipts,” said Leary, estimating home attendance at 400. “So we’ve been very fortunate to be, if you like, categorized as non-elite.”

For Ward, the lockdown means more time on the treadmill until Wales training camp at the end of the month. She also works — for Watford in the media and marketing department.

Ward scored her 44th goal for Wales on Oct. 22 in their 4-0 victory of the Faeroe Islands in the qualifying round for Euro 2022. Wales hosts Belarus on Dec. 1.

She had called attention to the non-elite distinction on Twitter.

“It probably got a bit more interesting than I was expecting,” Ward told the AP. “I wasn’t trying to dig anyone out or have a go at anyone. It was just a frustration that I wasn’t able to play football for the next four weeks.”