'We were defenseless': Virus left its mark on Italian soccer 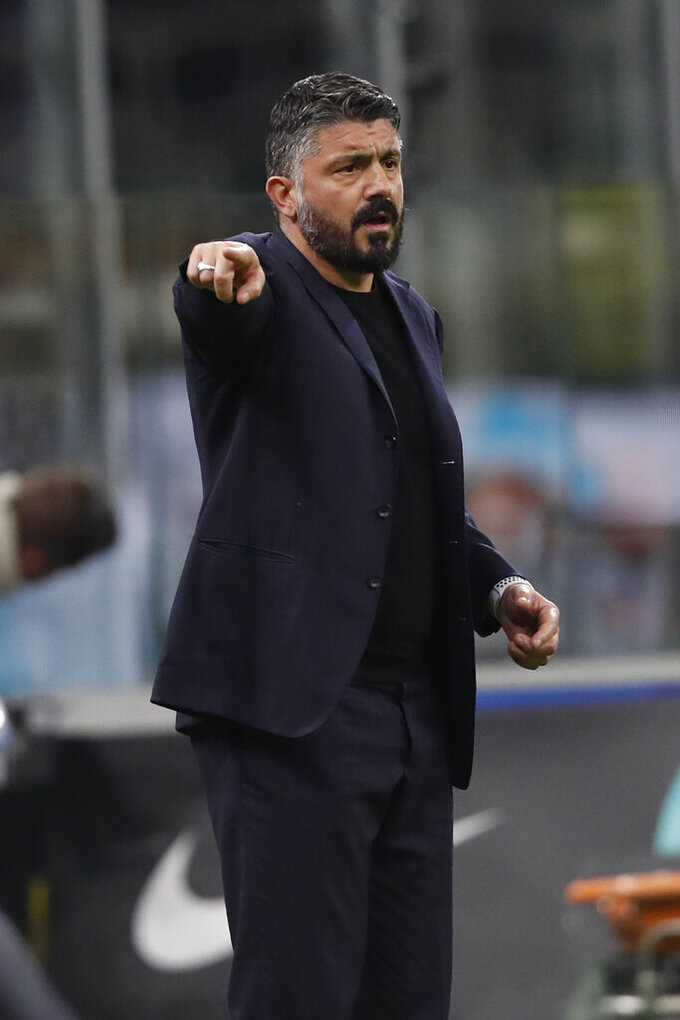 FILE - In this Feb. 12, 2020 file photo, Napoli's head coach Gennaro Gattuso gives instructions to his players during an Italian Cup soccer match between Inter Milan and Napoli at the San Siro stadium, in Milan, Italy. With Inter, Juventus and Milan -- plus Napoli -- all in action when Italian soccer restarts with the Italian Cup semifinals this week, the effects of the pandemic will still be fresh in the minds of players, coaches and club executives. Napoli hosts Inter on Saturday, June 13, 2020. (AP Photo/Antonio Calanni, file)

Giuseppe Bergomi, the club’s celebrated defender, was in so much pain from COVID-19 that he couldn’t sit down for most of March.

Three Juventus players — Daniele Rugani, Blaise Matuidi and Paulo Dybala — also tested positive for the virus. As did AC Milan technical director Paolo Maldini and his 18-year-old son, Daniele, who made his senior debut with the Rossoneri in February.

With Inter, Juventus and Milan — plus Napoli — all in action when Italian soccer restarts with the Italian Cup semifinals this week, the effects of the pandemic will still be fresh in the minds of players, coaches and club executives.

“My loved ones and I didn’t get sick but it’s impossible not to be affected by the tragedies we lived through,” Marotta added. “I worked in Bergamo, in Turin and now in Milan — all areas that witnessed a lot of pain. Even if you live inside the gilded world of soccer, we were defenseless.”

Without fans inside the stadiums, the second-leg matches begin with Juventus hosting Milan on Friday following a 1-1 draw in the first leg. Napoli hosts Inter a day later having won the first leg 1-0.

After more than three months without playing, league officials eliminated the possibility of extra time if the aggregate score remains level after 90 minutes and instead go directly to penalty shootouts for both the semifinals and final.

The final is scheduled for Rome next Wednesday. Serie A restarts three days later.

The first title of Buffon’s career was the Italian Cup in 1999 with Parma when he was 21. He’s now twice as old.

While Buffon was used mostly as a reserve in past Italian Cup triumphs with Juventus, he has been involved in all of the games in this edition.

As for Juve’s attack, Dybala — who tested positive for the virus for several weeks starting in March but remained asymptomatic — will likely be Cristiano Ronaldo’s striker partner with Gonzalo Higuain injured.

Under severe pressure from UEFA to straighten out its finances, Milan desperately needs to win the cup title to qualify directly for the group stage of the Europa League.

While re-entering European play would put Milan back under UEFA’s financial fair play microscope, it could also bring in as much as 20 million euros ($20 million) in prize money and avoid the prospect of having to qualify for the competition via the preliminary rounds.

Zlatan Ibrahimović, who is injured, is among three Milan players suspended for the second leg, along with defender Theo Hernández and midfielder Samuel Castillejo.

Ante Rebić, who was having a breakout season, should be the focus of Milan’s attack.

Napoli coach Gennaro Gattuso is in mourning following the death of his younger sister, Francesca, last week from diabetes.

The team’s “ultra” fans have posted banners saying they share in the coach’s pain, and players have reacted in kind.

A title for Napoli would be a bright spot amid a turbulent season that saw Gattuso replace the fired Carlo Ancelotti in December amid a long slump.

In sixth place in Serie A, an Italian Cup title would also provide Napoli direct entry into next season’s Europa League.

Dries Mertens has reportedly agreed to extend his contract with Napoli, and fellow striker Lorenzo Insigne is also showing signs of doing the same, creating a positive atmosphere around the team.

Inter has not won any trophies in nearly a decade, since raising the Italian Cup in 2011.

While Inter is still competing in the Europa League and has an outside chance of winning the Italian league, the cup could be the best opportunity for a title in Antonio Conte’s first season in charge.

Inter strikers Romelu Lukaku and Lautaro Martinez were playing in perfect tandem before the break, combining for 28 of Inter’s 49 goals in Serie A.

Inter can also draw inspiration from a 3-1 win at Napoli in January.

As for Bergomi and the club’s longtime team physician, Piero Volpi, both have recovered from the virus.