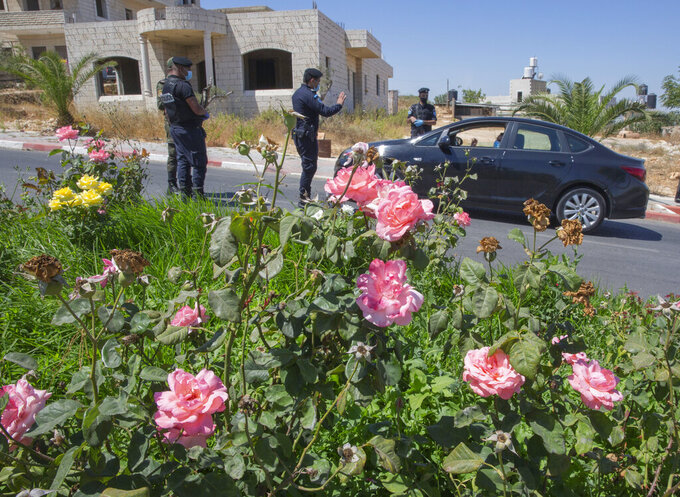 A Palestinian security unit mans a checkpoint at an entrance of in the West Bank city of Ramallah, Thursday, July 2, 2020. The Palestinian Authority has announced a five-day total lockdown in the West Bank starting Friday, in response to a major increase in coronavirus cases and deaths in recent days. (AP Photo/Nasser Nasser)

RAMALLAH, West Bank (AP) — By the end of May, the Palestinian Authority appeared to have quashed a coronavirus outbreak in the Israeli-occupied West Bank, with only around 400 confirmed cases and just two fatalities in the territory, following a nearly three-month lockdown.

Then the wedding invitations went out.

Over the last few weeks, infections have skyrocketed across the West Bank, with more than 4,000 new cases and an additional 15 deaths. Authorities blame the surge on widespread neglect of social distancing and mask-wearing — and on the summer wedding season.

Palestinian Prime Minister Mohammad Shtayyeh told a Cabinet meeting on Monday that 82% of cases in the West Bank were linked to weddings and funerals, saying that such large public gatherings must stop “immediately” or security forces would start breaking them up.

The Palestinian Authority imposed a strict five-day lockdown on Friday, forcing nearly all businesses to close and heavily restricting travel between towns and cities. The stay-at-home orders were renewed for another five days on Tuesday.

The epicenter of the renewed outbreak is in Hebron, the largest Palestinian city and a commercial hub of the territory. It accounts for around 75% of all active cases and more than two-thirds of all deaths, according to Ali Abed Rabu, a Palestinian Health Ministry official.

Palestinian weddings, usually held in the summer months, are major community events in which large families typically invite hundreds of guests. They feature lavish meals, often served buffet-style, as well as dancing and music late into the night.

“Hebronites are proud of their traditions and maintain them even at risky times like these," Abed Rabu said. “They brag about how many people attend and how many sheep they slaughter to feed them."

The virus causes mild to moderate flu-like symptoms in most patients, who recover within a few weeks. But it can cause severe illness or death, particularly among the old or infirm. The virus is highly contagious and can be spread by those showing no symptoms.

That makes weddings and other large public gatherings particularly risky. A major outbreak could overwhelm the Palestinian health sector, which has just 350 ventilators for a population of more than 2.5 million people.

Hebron's mayor, Tayseer Abu Snaineh, points to other potential vectors, including the fact that large numbers of workers and merchants in Hebron travel back and forth from Israel, which is battling a much larger outbreak that has also surged in recent weeks.

Abu Snaineh said the Palestinian Authority, which governs parts of the Israeli-occupied West Bank, has tried to prevent large gatherings. But Palestinian security forces are not allowed to operate in a large part of downtown Hebron known as H2, which under past agreements is under complete Israeli military control.

With the PA barred from the area and the Israeli military focused on securing the settlements, Abu Snaineh said there is no authority to impose virus restrictions. As a result, residents have held large weddings and other gatherings in recent weeks that appear to have accelerated the outbreak.

"People celebrate, hug each other and eat together in this area with no restrictions,” he said.

Odeh al-Rajabi, the head of an informal local committee that administers H2, says it has been reaching out to people and has convinced many to hold small family weddings rather than the usual massive feasts.

“Some people feel it is embarrassing to not hold a feast and invite people, but we tell them not to feel embarrassed, that we all understand, it's an emergency situation," he said.

The committee hopes to convince most large families to sign a code of conduct in the coming days that would prohibit such gatherings.

Abu Snaineh, the mayor, said ultra-conservative Muslims have also defied restrictions in order to pray in mosques. One group, known as Hezb al-Tahrir, has openly called on people to defy restrictions on group prayers, accusing the PA of “using coronavirus as a pretext to fight Islam.” The group is particularly influential in Hebron, where the population is more conservative than in other parts of the West Bank.

Alaa Abu Diab, a popular Palestinian comedian, posted a video this week in which he criticized people for holding weddings during the pandemic.

“I’ve just seen a video of a wedding party in which people are dancing and hugging as if there is no coronavirus," he said. “Why are you hugging and kissing each other in these sweaty, crowded gatherings?”

He also mocked those trafficking in conspiracy theories about the restrictions. “Who in the hell is conspiring against who? The whole world is collapsing, and you say it's a conspiracy.”