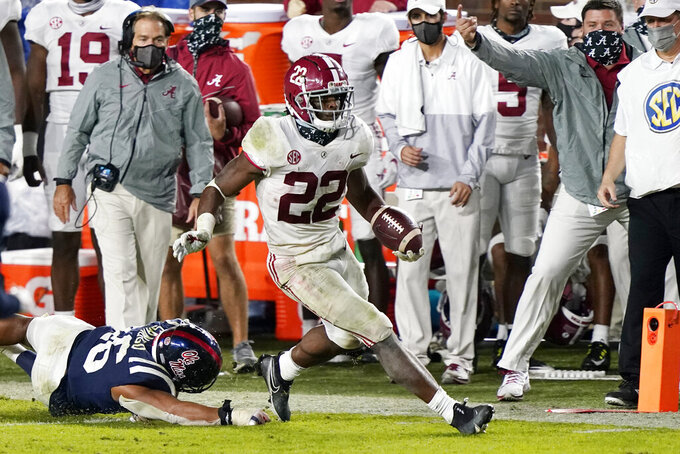 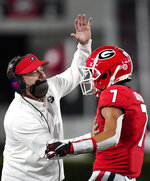 The COVID-19 pandemic is packing a punch in college football this week, nowhere harder than in the Southeastern Conference.

Alabama coach Nick Saban might not be on the sideline when the No. 2 Crimson Tide hosts No. 3 Georgia on Saturday in perhaps the biggest game of the season. Saban tested positive for COVID-19 on Wednesday. Unless he has three subsequent negative tests over three days, he will be unable to leave isolation.

LSU's game at No. 10 Florida and Vanderbilt's visit to Missouri also have been postponed.

Two other games involving Top 10 teams also are off: No. 7 Oklahoma State at Baylor and No. 8 Cincinnati at Tulsa.

FIU-Charlotte and Southern Miss-UTEP in Conference USA were postponed, as was the matchup between Appalachian State and Georgia Southern, which hurriedly scheduled a replacement home game against independent Massachusetts.

No. 1 Clemson, No. 4 Notre Dame and No. 5 North Carolina all are double-digit favorites as they look to stay unbeaten in the ACC. The Tigers head to Georgia Tech, the Irish host Louisville and the Tar Heels visit Florida State.

It's the only matchup of Top 25 teams and was supposed to be the second straight game Saban faced off against a former assistant, Bulldogs head coach Kirby Smart. Steve Sarkisian will be in charge of the Tide with Saban quarantining at home.

Alabama got into a scoring contest in last week's 63-48 win against Lane Kiffin and Mississippi. Georgia was challenged for a while against Tennessee, trailing at half before winning 44-21.

The Crimson Tide have won five straight against Georgia and will be meeting the Bulldogs in the regular season for the first time since 2015.

Georgia presents a much bigger physical challenge than the Tide faced last week. The Bulldogs' run defense is best in the nation. Opponents are averaging 1.49 yards per carry and have scored no rushing touchdowns. The Bulldogs, however, haven't seen a running back like Najee Harris, who went for a career-high 206 yards and five touchdowns against Ole Miss.

In 2018, Jalen Hurts took over for an injured Tua Tagovailoa in the fourth quarter and led the Tide to a 35-28 win in the SEC championship game in Atlanta. Eleven months earlier on the same field, Tagovailoa had replaced an ineffective Hurts and brought back the Tide from a 13-0 deficit to beat the Bulldogs 26-23 in overtime in the national championship game.

Ian Book became Notre Dame's first quarterback to pile up 2,500 yards passing, 500 yards rushing and 30 touchdown passes in a season, and he's been steady through three games against overmatched competition.

The third-year starter's status as a second-tier Heisman candidate could change quickly if the Irish keep winning and he has a big outing against Clemson on Nov. 7.

1 — Career fumbles by Alabama's Harris, whose streak of 466 touches without losing the ball ended in the first quarter against Mississippi last week.

8 — Fumble recoveries by Central Florida through three games, matching its 13-game total in 2019.

51 — Consecutive Big 12 road losses by Kansas since it won at Iowa State in 2008. The Jayhawks visit West Virginia.

Kentucky at No. 18 Tennessee

The border rivals are meeting for the 116th time, and Kentucky will be going for its first win in Knoxville since 1984.

The Wildcats' defense should be plenty confident after holding Mississippi State coach Mike Leach's “Air Raid” offense without a touchdown last week. Kentucky's offense needs to get out of neutral, especially the passing game.

Tennessee is looking to bounce back after getting dominated in the second half against Georgia.

The Volunteers used a late goal-line stand to beat the Wildcats 17-13 last year.

Middle Tennessee's Rick Stockstill is 5-12 since he was Conference USA Coach of the Year in 2018. His Blue Raiders broke through with their first win last week after an 0-4 start, scoring in the last minute to beat Florida International. They're a touchdown favorite at home against a North Texas team that can put up — and give up — a lot of points.

Stockstill hasn't won a conference title since 2006, and it doesn't appear the next one is coming any time soon. In these tough financial times for athletic departments, Stockstill might be able to survive another bad season if only because his contract buyout is north of $6 million.