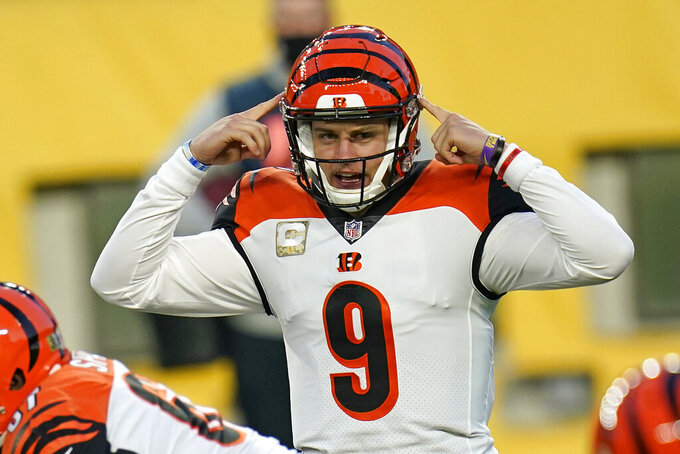 PITTSBURGH (AP) — Ben Roethlisberger spent the week stuck at home, equal parts pre-Kindergarten teacher to his young children and overzealous student to the Pittsburgh Steelers' coaching staff after being forced to prepare remotely because of the NFL's COVID-19 protocols.

It wasn't exactly fun. Yet it may have been also a blessing in disguise. No practice meant no throwing. No throwing meant the 38-year-old's surgically repaired right arm could rest, not necessarily a bad thing in mid-November. Rest meant the juice Roethlisberger has occasionally struggled to muster during Pittsburgh's record-setting start could return.

Considering the results, maybe Roethlisberger should take it easy more often, protocols or no protocols. The veteran passed for a season-high 344 yards and four touchdowns on Sunday as the Steelers improved to 9-0 with a 36-10 blowout of Cincinnati.

“I’m trying to talk coach into seeing if I can take next week off, too,” Roethlisberger said with a laugh after Pittsburgh beat its division rival for the 11th straight time.

Roethlisberger and three teammates were forced to self-quarantine for five days after tight end Vance McDonald tested positive for COVID-19. While he could sit in on meetings over videoconference and bombard offensive coordinator Randy Fichtner and quarterbacks coach Matt Canada with texts, he missed being around his teammates.

Still, any concerns about his absence affecting his performance vanished quickly. Roethlisberger found Diontae Johnson and JuJu Smith-Schuster for touchdowns in the first half at blustery Heinz Field and connected with rookie Chase Claypool twice in the second half — both of them on screaming darts — as the Steelers pulled away for an easy one after three straight victories that came down to the final snap.

“It was a challenging week. It wasn’t a very fluid week for us,” Tomlin said after his team spent a second straight week in the NFL's intensive COVID-19 protocols. "We didn't have a lot of exposure to our guys. A lot of anxiety in terms of prep ... but we're not letting some of the challenges in the pandemic affect the quality of our play.”

Not by a long shot. At least not against Cincinnati.

Two weeks after a promising victory over Tennessee, the Bengals (2-6-1) were reminded how much work remains to be done under second-year head coach Zac Taylor. Cincinnati went 0 for 13 on third down and rookie quarterback Joe Burrow spent much of the second half under duress. T.J. Watt collected two of Pittsburgh's four sacks as the Steelers took advantage of the Bengals' patchwork offensive line. Burrow finished 21 of 40 for 213 yards with a touchdown but found little consistency save for a 90-yard drive to start the second quarter that briefly pulled Cincinnati within a touchdown.

“It was not our best performance," Taylor said. “We went on the road, we didn’t really win in any phase, any statistical category in terms of the turnovers, penalties, explosive plays. We didn’t win any of them. There’s no way you’re going to win a game doing that way against a good football team.”

Pittsburgh has put together the best start in franchise history largely by outlasting opponents instead of overwhelming them. Three straight escapes — the last a nail-biter in Dallas last weekend in which the Steelers were outplayed for long stretches — put Pittsburgh in the rare position of having to defend the NFL's best record.

The team's first brush with COVID-19 led to an air of uncertainty. Players were kept apart save for practice while coaches turned to technology to try and keep things as normal as possible.

While the plan wasn't to have Roethlisberger throw 46 times, the Bengals didn't give him much choice. Cincinnati stacked the line trying to stop the run, basically betting Roethlisberger couldn't find a rhythm given his lack of practice time and the swirling winds.

They chose poorly. Following a sluggish start, Roethlisberger got going with a 46-yard rainbow to Johnson late in the first quarter. That set up a 12-yard strike to Johnson that put Pittsburgh up 12-0.

Burrow's 2-yard touchdown to Tee Higgins on fourth down drew the Bengals within 12-7, but Cincinnati would get no closer. Roethlisberger responded by leading a 78-yard drive, zipping a fastball to Smith-Schuster to put the Steelers back up by 12.

Pittsburgh poured it on in the second half despite having little support in the running game. Considering the way Roethlisberger was throwing, it hardly mattered. Touchdown passes of 5 and 11 yards to Claypool blew it open.

“We’re a balanced group,” Tomlin said. "We can give it to you however you want it.”

The Bengals were forced to travel to Pittsburgh without a handful of coaches, including linebackers coach Al Golden, and secondary coach Steve Jackson due to COVID-19 concerns.

Bengals: Lost CB Mackensie Alexander to a concussion in the first quarter.

Steelers: S Terrell Edmunds left in the second half with a hamstring issue.

Bengals: Visit Washington next week. The Bengals haven't lost to Washington since 1991 (3-0-1).

Steelers: Travel to Jacksonville next Sunday to take on the Jaguars.