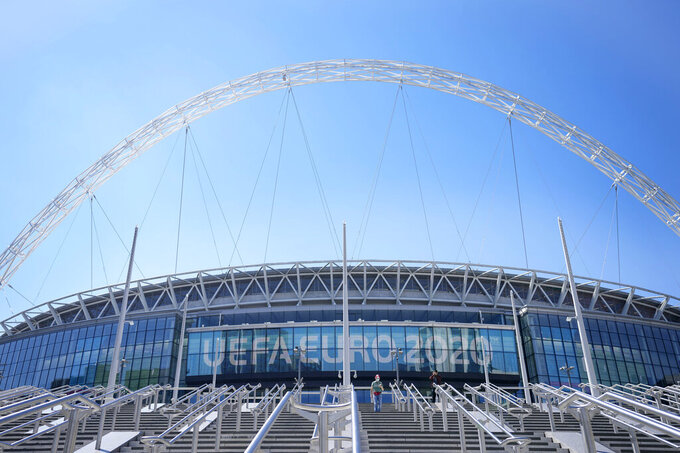 FILE - In this Wednesday, June 9, 2021 file photo, a view of the entrance to Wembley stadium, ahead of the Euro 2020 soccer championship in London. The British government says more than 60,000 fans will be allowed into the semifinals and final of the European Championship at Wembley Stadium. No details have been provided yet on how fans from overseas can attend without having to quarantine after flying into London. (AP Photo/Frank Augstein, File)

LONDON (AP) — More than 60,000 fans will be allowed into the semifinals and final of the European Championship at Wembley Stadium after UEFA secured an agreement Tuesday with the British government on an increased capacity.

No details have been provided yet on how fans from overseas can potentially attend without having to quarantine after flying into London.

The government had already agreed to increase the current group-stage capacity of about 22,000 to at least 40,000 for one game in the round of 16 game and the final three matches of the Euro 2020 tournament at the 90,000-seat stadium.

Now Wembley will be allowed to be at about 75% capacity for the semifinals and final.

“The last 18 months have taught us — both on and off the pitch — how integral fans are to the fabric of the game," UEFA president Aleksander Ceferin said. “This tournament has been a beacon of hope to reassure people that we are returning to a more normal way of life and this is a further step along that road.

“I am grateful to the prime minister and the UK government for their hard work in finalizing these arrangements with us."

Tourists from all the non-British nations competing at Euro 2020 have to quarantine for at least five days upon arrival in the country under general pandemic regulations to contain the spread of the coronavirus.

UEFA said last week it was in talks with authorities in London about allowing fans in by staying in the country less than 24 hours and staying within bubbles. UEFA is also seeking quarantine exemptions for VIPs, including representatives of sponsors.

There are fears Britain is seeing the start of a third wave of coronavirus infections with cases rising to 68,449 over the last seven days. The resurgence is the result of the highly contagious delta variant first identified in India, sparking concerns among European leaders about the growing crowds at Wembley.

“I hope that UEFA will deal (with this) responsibly and I don’t think it would be good if the stadiums there are full,” German Chancellor Angela Merkel said in Berlin.

Germany has a strict 14-day quarantine for people coming from Britain because of concerns that more cases of the delta variant could be imported, but other European Union countries allow travelers who are fully vaccinated to avoid quarantining.

To enter Wembley, fans have to produce a negative lateral flow test result or show proof they have been fully vaccinated.

Euro 2020 is seeing the biggest crowds at any event in Britain since the pandemic took hold in the country in March 2020.