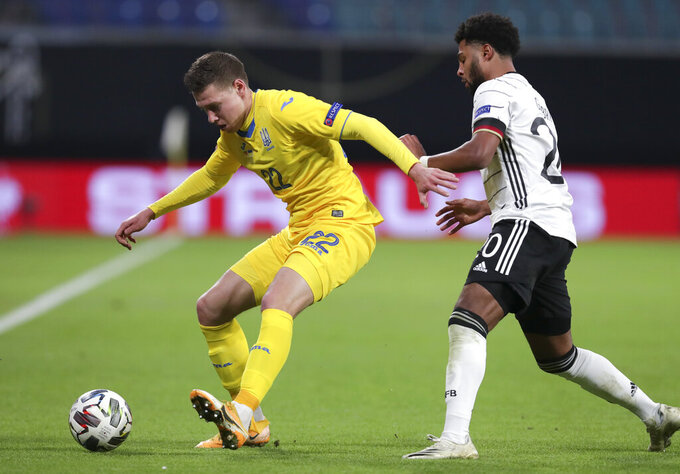 Leon Goretzka set up Leroy Sané, and then Werner for Germany’s second goal after Roman Yaremchuk gave the visitors a shock lead. Werner sealed the result with his second goal in the 64th minute.

There were doubts about whether the game could go ahead at all after four Ukraine players – Andrii Yarmolenko, Serhii Sydorchuk, Viktor Kovalenko and Viktor Tsyhankov – and staff member Vadym Komardin tested positive for COVID-19 on Friday. But another round of tests for the rest of the squad on Saturday returned negative results and Leipzig health authorities said the game could proceed.

Germany coach Joachim Löw restored Bayern Munich players Goretzka, Sané, Niklas Süle, Serge Gnabry and goalkeeper Manuel Neuer to his starting lineup. He also kept faith in PSV Eindhoven defender Philipp Max, who made his debut in a 1-0 win over the Czech Republic on Wednesday. The Bayern players were given the night off for the friendly.

The home side started promisingly but Yaremchuk fired inside the right post for Ukraine in the 11th minute, after Olexandr Zubkov’s persistence saw him past Max and Robin Koch.

Goretzka set Sané free on the right and the winger cut inside between two defenders before unleashing his shot inside the far post in the 23rd.

Oleksandr Zinchenko had an effort deflected onto the post by Süle early in the second half, before Werner’s deflected effort in capped a successful return for the former Leipzig forward. Werner joined Chelsea in the offseason after four seasons at Leipzig.

Spain was held by Switzerland to 1-1 in the other Group 4 game. Germany leads Spain by a point with one round of games remaining. The sides meet in Seville on Tuesday with top spot at stake.