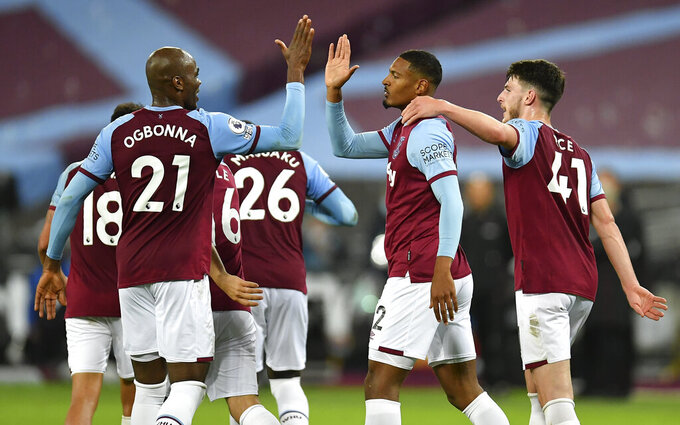 LONDON (AP) — Jarrod Bowen scored twice as West Ham collected its first points of the Premier League season by overwhelming Wolverhampton in a 4-0 win on Sunday.

An own-goal by Raul Jimenez, who unwittingly deflected in Tomas Soucek's glancing header from a corner, and Sebastien Haller's stoppage-time header capped a woeful night for Wolves at the Olympic Stadium as they lost for the second time in a week.

Wolves were also beaten 3-1 by Manchester City on Monday and aren't showing the defensive resilience they had last season in their run to seventh place in the league and the Europa League quarterfinals.

“We played a very bad game with a lot of mistakes, and West Ham were better than us," Wolves manager Nuno Espirito Santo said. “A lack of concentration, anxiety and we must improve. We must bounce back."

After losing to Newcastle and Arsenal, West Ham had to cope without its manager for the game against Wolves after David Moyes contracted COVID-19 during the week.

Assistant Alan Irvine took over on the touchline, with Moyes relaying instructions by telephone to another member of the backroom staff, Stuart Pearce, from in front of his television.

It didn't stop the hosts dominating, with Bowen cutting in from the right and curling a shot into the bottom corner in the 17th minute after a quickly taken free kick by Pablo Fornals.

Bowen tucked home a close-range finish after Fornals struck the post with a long-range shot to put West Ham two goals in front.

Jimenez's own-goal made it 3-0 in the 66th and Haller added a fourth with a far-post header from Arthur Masuaku's cross in the third minute of stoppage time, five minutes after coming on as a substitute.

“It could easily have been six or seven," West Ham midfielder Declan Rice said. “I am buzzing with the performance.”

“Our manager has tested positive for COVID," he added, "so the backroom staff have taken over. I can’t be any happier for the staff tonight.”