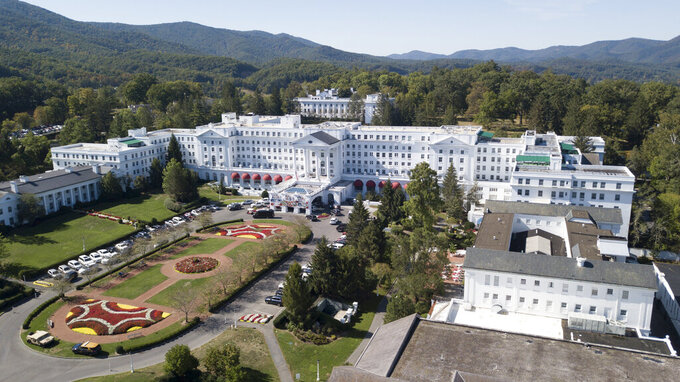 FILE - This is a Sept. 15, 2019, file photo showing The Greenbrier resort nestled in the mountains in White Sulphur Springs, W.Va. The West Virginia stop on the PGA Tour has fallen victim to the coronavirus pandemic and a schedule change to the fall. The PGA Tour and The Greenbrier resort announced Thursday, April 16, 2020, that A Military Tribute at The Greenbrier, scheduled for Sept. 10-13, has been canceled to make room for other tournaments that had been called off due to the virus. Both parties also announced that the remaining years of the tournament’s contract through 2026 have been canceled. (AP Photo/Steve Helber, File)

CHARLESTON, W.Va. (AP) — West Virginia Gov. Jim Justice brushed off criticism that the posh resort he owns did not follow coronavirus pandemic guidelines after video surfaced of a New Year’s Eve gala showing a tightly packed ballroom, with many people not wearing masks.

The Republican governor, who did not attend the event, has advocated strict mask-wearing — and now advocates vaccinations — as imperative to controlling the coronavirus across the rural state. But video posted online of the billionaire businessman’s resort, The Greenbrier, called into question whether Justice is enforcing pandemic restrictions that have curtailed other businesses.

The governor on Monday called the criticism a “political hit” at him and referred to a Democratic state senator who posted video of the party.

Justice defended protocols put in place by Greenbrier staff, although he said the situation could have been handled better. He rejected the notion that he isn’t pulling his weight while residents make sacrifices such as forgoing seeing family and not being able to play school sports.

“If you don’t think I’m pulling the rope, then you really got a screw loose,” Justice said, referring to his handling of the pandemic. “I don't want any favors," he added about his businesses.

State Sen. Bill Ihlenfeld, an Ohio County Democrat, said on Twitter that the “Greenbrier gala was problematic for a number of reasons, primarily due to the danger it posed to public health, but also because it sent a message that the rules don’t apply to everyone. I’m hopeful that we will do better in 2021.”

West Virginia reported a record 7,413 confirmed positive cases of the virus last week. At least 1,396 people have died since the pandemic began, up 75% in the past month. Compared to other states, West Virginia has the 13th lowest death count per capita. So far, 52,221 coronavirus vaccine doses have been administered, with the state now offering shots to any resident 80 years old and older.

It was unclear who organized the Greenbrier event. Justice said he did not have details and would ask his daughter, Jill Justice, who manages the resort. A spokesman for the resort did not respond to phone calls seeking comment.

“I’m not going to apologize to you for employing 1,500 people there," Justice said. “If there was something that was missed, it was missed."

The Greenbrier's COVID-19 guidelines require all guests to wear a face covering inside. Justice also issued a statewide indoor mask requirement in November.

Stephen Baldwin, a Democratic member of the state Senate from Greenbrier County whose wife, Kerry, is director of event services at The Greenbrier, said in a Facebook post that the private resort has “made continued efforts to keep (COVID-19) guidelines while keeping the county’s largest employer open. No small task, & for 10 months they’ve done it well. Let’s all continue to work together for the good of our community.”

Baldwin later deleted the post, replacing it with a longer statement that said the video was upsetting, showed a violation of guidelines and put the community at risk. Baldwin said his initial comments were made quickly during family time and were “my mistake.”

Others criticized the gathering at a time when Justice has postponed the start of the state high school winter sports season until March 1.

“This is the definition of abuse of power where those making the rules do not have to live by them,” Dr. James Lohan of Charleston said on Twitter.

Lohan pointed out that high school basketball games are currently being played in Ohio, while practice has started in the surrounding states of Kentucky, Pennsylvania and Virginia.

“To bring kids, a game atmosphere with grandparents or whatever it may be inside a gymnasium, is that the thing to do today?” Justice said in response. “It doesn't matter if they did something bad at Snowshoe (Mountain Ski Resort) or Greenbrier or wherever it may be. ... We shouldn't do that.”