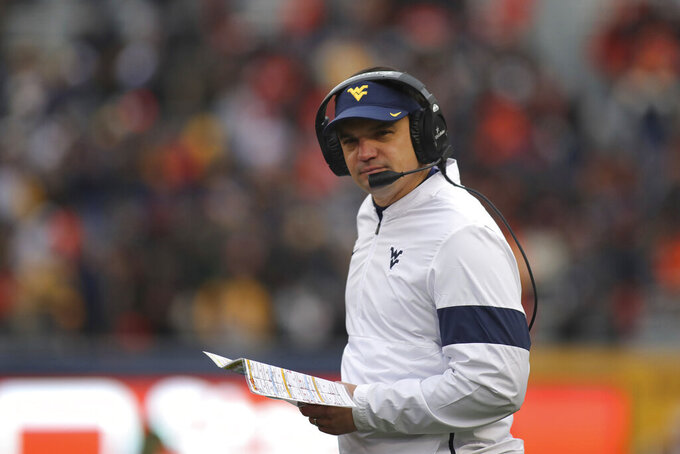 FILE - In this Nov. 23, 2019, file photo, West Virginia head coach Neal Brown watches during the second quarter of an NCAA college football game against Oklahoma State, in Morgantown, W.Va. .Brown went 5-7 in his first season at West Virginia in 2019 and faces challenges on both sides of the ball as the Mountaineers try to compete for a Big 12 title. (AP Photo/Chris Jackson, File)

West Virginia coach Neal Brown gave his players some much-welcome good vibes as they started fall practice during the coronavirus pandemic, unveiling an upgraded locker room to the sounds of celebration.

After the news hit that the Big 12 season would go on, the reality has set in that the Mountaineers will need a better product on the field, too, in order to compete for a title.

They'll try to avoid the first back-to-back losing seasons since Frank Cignetti was the head coach in 1978 and 1979.

“That’s our goal, to be the most improved team in the country,” Brown said.

But before fall practices even began, the second-year coach was dealing with turmoil, retooling his defensive staff after coordinator Vic Koenning was forced out for a series of insensitive remarks.

West Virginia's offensive line is looking for stability after trying numerous starting combinations a year ago. The offense did not surpass 20 points in eight games last season.

The biggest room for growth is in the running game. West Virginia averaged just 73 rushing yards to rank 128th out of 130 FBS teams. Juniors Leddie Brown and Alec Sinkfield will be joined in the rotation by redshirt freshman Tony Mathis.

The deepest position on the team appears to be at wide receiver, led by Sam James. He caught 69 passes for 677 yards as a redshirt freshman. Brown said relying on James last season will only help him improve.

“He’s going to be one of our go-to guys this year, and I think you will continue to see him play at a high level,” Brown said.

Some other things to know about West Virginia’s season:

Jarret Doege started three games at the end of the 2019 season in place of Austin Kendall, who started the first nine. They combined for just three 300-yard passing games. Kendall threw for 12 touchdowns with 10 interceptions.

Brown said after a recent scrimmage that both quarterbacks made mistakes on decisions “that older quarterbacks shouldn’t do.”

Brothers Darius and Dante Stills had seven sacks apiece a year ago. Darius Stills, a senior, was named the Big 12 preseason defensive player of the year. He said last year the focused was mostly on learning a new system. Now it’s more about the mental preparation.

“Once you know what to do the first year, applying your mental skills to it makes you a better football player in general,” he said. “Really it’s just been harping on the small things that make big plays — getting off blocks, your hand placement, what gaps you’re supposed to be in.”

The defense will get some help from a pair of graduate transfers, linebackers Tony Fields from Arizona and Bryce Brand from Maryland.

Fields was a three-year starter at Arizona and was the Wildcats' second-leading tackler last season.

“You can tell he loves to play the game,” Brown said. “He plays at full speed every snap."

West Virginia moved its weight room, training room and dining area into the stadium’s concourse to maintain social distancing. Nearly all of the players are taking online classes. Brown said it’s important for his players, especially the younger ones, to act responsibly outside of football.

“You’re asking them to make mature decisions and a lot of these guys are not to that point in their lives,” Brown said.

Sophomore safety Kerry Martin opted out of the season last month due to health concerns, saying he has sickle cell anemia and asthma.

West Virginia's games against Florida State in Atlanta on Sept. 5 and at home against Maryland on Sept. 19 were canceled, both due to the pandemic. The Mountaineers open the season without fans on Sept. 12 at home against Eastern Kentucky. Conference play starts Sept. 26 at Oklahoma State.