What boycott? Majority of Steelers arrive on time for OTAs 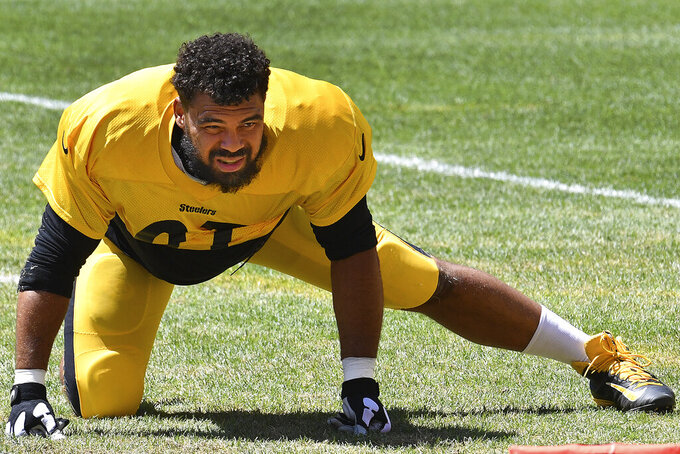 FILE - Pittsburgh Steelers Cam Heyward stretches during practice at Heinz Field in Pittsburgh, in this Monday, Aug. 17, 2020, file photo. Heyward was among the majority of Steelers who participated in the first day of organized team activities on Tuesday, May 25, 2021, a month after saying they would sit out due to concerns over health and safety protocols.(Peter Diana/Pittsburgh Post-Gazette via AP, File)

PITTSBURGH (AP) — Cam Heyward is over all of the virtual stuff. The videoconferencing while sitting in a car in his driveway. The solitary workouts. The nagging discomfort of feeling separated from his Pittsburgh Steelers teammates.

So when the club amended some of the health and safety protocols after the players threatened a boycott of the team's offseason program, the veteran defensive tackle and a vast majority of the other 89 players on the roster showed up for the start of organized team activities, just as always.

“We were able to iron out some things and put the players’ (anxiety) at a low and players were still given the opportunity to understand they were not mandatory, it was voluntary,” Heyward said.

While the longtime defensive captain stressed he had zero problem with those who opted to stay away — pointing out players have become increasingly comfortable working out on their own, a byproduct of the COVID-19 pandemic — he added being in the building sent an important message.

“I wanted to make sure we didn’t ostracize the guys that went in,” Heyward said. "We had a lot of guys that love being in and we had to show this front that we didn’t want to jeopardize that.”

Heyward indicated he believes there will be 100% player participation during minicamp — which is mandatory — next month.

For now, the focus is on helping new faces get acclimated while getting a jumpstart on the team building that was difficult to come by last spring, when the entire offseason program was done remotely during the pandemic shutdown.

“I think it’s a big time for learning,” Heyward said. "And a lot of young guys tend to improve in this time, whether it’s first-year or second-year guys. So this time is really about getting those guys up to speed and teaching these guys.”

Something Heyward didn't get to experience after being Pittsburgh's first-round pick during the middle of the 2011 NFL lockout. He doesn't want this year's group to miss out, one of the reasons he and quarterback Ben Roethlisberger were among the team's longest-tenured players on the field Tuesday.

“We try to cultivate relationships right now, we try to learn different guys are in new positions and that just comes with time,” Heyward said. “There’s growth that can happen, for a younger guy talking to an older guy. Younger guys like to emulate older guys during this time.”

One older guy in particular. Heyward made it a point last week to defend the 39-year-old Roethlisberger, who took a voluntary pay cut to ensure his return for an 18th season.

Heyward said Tuesday concerns about Roethlisberger have been “blown out of proportion” and he's tired of seeing the two-time Super Bowl winner shouldering the blame for Pittsburgh's 1-5 finish following an 11-0 start.

“If he was just here for the money, that’s one thing, and I don’t think we’ll ever have to worry about that," Heyward said.

"But when he steps in this building, he’s 100% dedicated to this. So when I hear the bad-mouthing about him being a not great quarterback and then everybody’s ready to elevate other quarterbacks. I’m like, ‘What have they done?’ This guy is a proven winner but yet we’re ready to discount him.”

Not Heyward, who is adamant the reigning AFC North champions remain a threat even after the high-profile departures of players such as center Maurkice Pouncey and outside linebacker Bud Dupree.

“I think we find the depth by using this time out here getting ready minicamps and training camp,” Heyward said. “I don't worry about it. I'm excited about it. This is a chance for new guys to step up.”