What now for British economy with UK-EU trade deal reached? 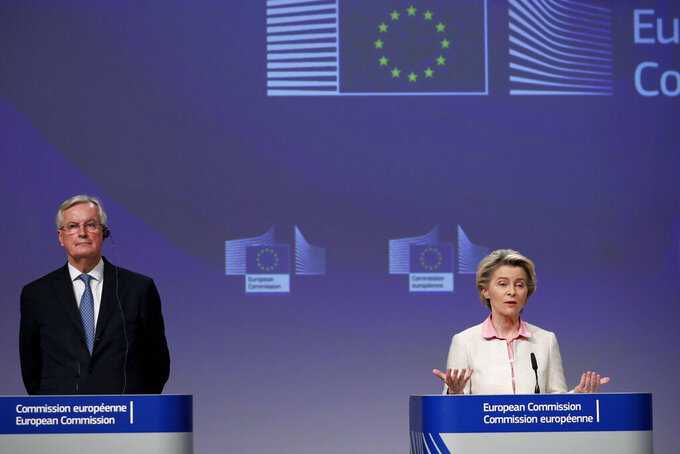 LONDON (AP) — The last-minute trade deal between the U.K. and the European Union means businesses will be spared new tariffs and border disruption at the start of the new year - an economic shock that would have compounded the employment and financial troubles inflicted by the pandemic.

News of the agreement Thursday brought sighs of relief from the offices of corporate bosses and politicians, as well as from consumers anticipating produce shortages and transport workers facing the potential of long backups at border crossings.

Bank of England Governor Andrew Bailey recently warned that a failure to secure a U.K.-E.U. trade deal would have a greater long-term impact on the British economy than the long-term impact of the coronavirus pandemic, which has led to the country's deepest recession in more than three centuries.

The deal still must win approval from the British and EU parliaments. Here’s a look at the changes to come and their likely implications.

Though the U.K. left the EU on Jan. 31, it is following the bloc’s rules until the end of this year as part of a transition period to the new economic relationship. The problem was, what comes after that?

The U.K. is leaving the European single market, which after its departure will encompass around 450 million people. At its heart, the single market aims to make trade as simple as possible, regardless of where a business is located within the European Economic Area, which in addition to the 27 EU member states includes non-EU nations including Iceland and Norway. The rules governing trade are the same across the single market and are based on the free movement of goods, services, capital and people.

The U.K. is also leaving the customs union, which eliminated tariffs between members and created a common external tariff to non-members. Under the customs union, the EU negotiates international trade deals on behalf of its members — giving it a weight in the global economy that no single member would have.

WHAT IS THE NEW RELATIONSHIP?

Under the terms of the new deal, there will be no tariffs on goods traded between the U.K. and the EU. For car manufacturers, for example, that's a relief as without a deal a 10% charge would have applied from Jan. 1. There will also be no quotas, meaning that exporters can still transport as many vehicles as they wish.

Still, trade will not be as seamless as before as the U.K. leaves the single market and the customs union. Firms will have to file forms and customs declarations for the first time in years. There will also be different rules on product labeling as well as sanitary checks on agricultural products, for example.

The government has estimated that the new red tape will result in an extra 215 million customs declarations each year at an annual cost of about 7 billion pounds.

But a deal averts what could have been considerable chaos and a deeper blow to trade, since new tariffs would have added to the cost of doing business between the UK and the EU for many different categories of good. That has many viewing Thursday's deal as making the best of a bad situation for business.

WHAT WILL THE IMMEDIATE IMPACT BE?

It is possible that it will take time to adjust, likely leading to further traffic jams on both sides of the English Channel as well as delays at the ports in the days and weeks after Jan. 1. Early expectations are that some food prices, notably of imported meat and dairy products, will rise in the weeks ahead.

HOW WILL THE NEW TRADE RELATIONSHIP AFFECT ECONOMIC GROWTH?

Economists agree that the deal is better for the British economy than a no-deal outcome, and will help it recover from the coronavirus recession, which is expected to have reduced economic output by around 12% in 2020. The impact is much smaller for the EU and other countries around the world, which would have mainly experienced some volatility in financial markets in case of no deal.

The EU accounts for around half of the U.K.’s exports, so avoiding tariffs will help many companies. Executives can start to implement investment decisions that they’d kept on hold over the past few years of Brexit uncertainty. Still, the deal with the EU does not incorporate the full scope of the services sector. Since it accounts for around 80% of the British economy, those businesses that rely heavily on business with the EU, such as banking and finance, face a murkier future. That's particularly ominous for the UK's huge banking sector.

WHAT ABOUT LONGER TERM?

In the longer-term, most forecasters think the British economy will end up being a few percentage points smaller over the coming few years than it otherwise would have been if it had stayed in the EU. That may not sound much in the context of this year’s recession, but it does mean that living standards would be lower than otherwise have been the case.

Economists at Berenberg bank wrote that “exiting the EU single market and customs union will lower UK potential growth by harming its export prospects and reducing inflows of foreign direct investment and qualified labor from the EU.” They estimated a maximum growth potential of 2.0% annually as an EU member, against 1.7% with Thursday’s deal and 1.5% with no deal.

WHAT WILL THE U.K. DO DIFFERENTLY?

The whole point of Brexit was to allow the U.K. to set its own rules and do things its own way. Therefore the sticking point during the months of tense trade negotiation was to work out what to do when and if the U.K. diverged from the EU's rules.

The EU has long feared that Britain would undercut the bloc’s social, environmental and state aid rules to be able to gain an unfair edge with its exports to the EU. Britain has said that having to meet EU rules would undercut its sovereignty. The agreement struck a compromise by conceding a key U.K. demand that the European Court of Justice not be involved in resolving disputes. It instead allows the possibility for arbitration or trade countermeasures in case either side feels they are being damaged by labor, policy or employment measures. If those measures are overused, either side can trigger a reopening of the trade aspects of the treaty.

WHAT ABOUT TRADE OUTSIDE THE EU?

Through Dec. 31, the U.K. remains bound by the 40 or so international trade agreements the EU has negotiated over the past few years. In the run-up to the end of the year, the U.K. has sought to rollover those deals, such as with Japan and Mexico, but a few still have to be concluded. At the start of 2021, the U.K. will be able to forge its own trade deals with whoever it wants. Negotiations with the United States have already started though President-elect Joe Biden has indicated that trade deals are not top of his in-tray when he assumes office later in January.

Follow all AP stories about Brexit and British politics at https://apnews.com/Brexit