WHAT TO WATCH: Democrats open a new kind of convention 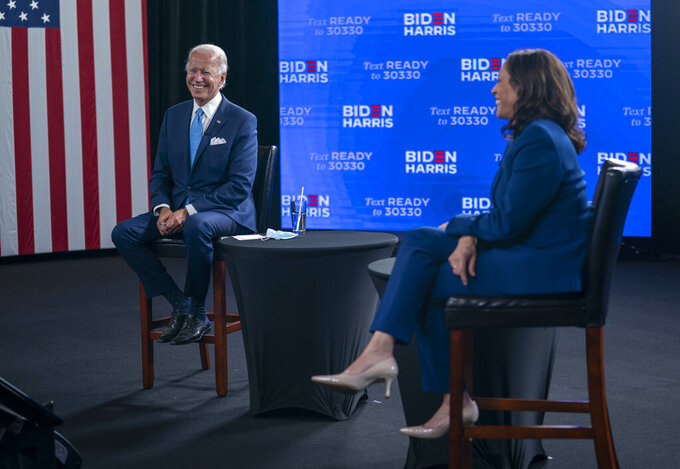 ATLANTA (AP) — The Democratic Party will convene, sort of, amid a pandemic that has upended the usual pomp and circumstance of presidential nominating conventions.

Democratic National Committee Chairman Tom Perez will be in Milwaukee, which he’d chosen as the 2020 convention host city. But presidential candidate Joe Biden and his running mate, Kamala Harris, won’t be. Nor will the 57 state, territorial and international delegations, the party activists and the media hordes that would have filled a downtown arena to see Biden and Harris nominated to take on President Donald Trump and Vice President Mike Pence in November.

Instead, Democrats will put on essentially an all-virtual convention, broadcasting two hours of prime-time programming starting at 9 p.m. EDT, much of it pre-taped, Monday through Thursday. No crowds. No hullabaloo. And no balloons.

What to watch on opening night Monday:

THE MESSAGE: The theme is deliberately vague, “We the People,” and the lineup doesn’t fit neatly into any box. Viewers will hear from Vermont Sen. Bernie Sanders, who finished second to Biden in the nominating contest, and Republican John Kasich, the former Ohio governor and 2016 primary rival to Trump. To underscore the gap: That's a self-identified democratic socialist who wants a “political revolution” and a conservative Republican who was once a budget hawk in Congress and fought labor unions in the Ohio statehouse. And both will pitch for Biden.

That reflects a key reality of Biden’s candidacy: It’s always been more about Trump's moral and competence than about the particulars of Democrats’ policy fights. Hence Biden's campaign pledges to “unify the country” and “restore the soul of the nation.” Yet he has spent the last several months trying to shore up relationships with the party's left flank, which remains skeptical about him. He has a lengthy policy slate he touts as the most progressive of any modern Democratic nominee.

The convention’s opening night will test how seamlessly the Biden campaign can spend the next 78 days casting such a wide net across a splintered American electorate.

SANDERS’ TONE: The Vermont senator is a two-time runner-up for the nomination but by Biden’s own admission has done as much as any losing presidential candidate to shape a major political party. Four years ago, Sanders was at the microphone to nominate Hillary Clinton on the floor in Philadelphia, but the bitterness between their camps was apparent, and it wounded her against Trump.

There’s no convention floor to have a fight on this year. No way for viewers at home to hear delegates jeering at anyone on stage they dislike or disagree with. There are other key differences: Sanders and Biden are personally more friendly to each other than Clinton and Sanders were; Biden sewed up the nomination earlier, giving Sanders less leverage this year; and, of course, Trump isn’t a hypothetical president as he was in 2016. He is the president, and Sanders has made clear that he sees 2020 as an existential election for the country.

Given all that, the question becomes how Sanders balances his own ideological fervor — which highlights distinctions between himself and Biden — with his personal affinity for the nominee and their shared mission to defeat Trump.

OBAMA. NOT HIM. HER: Perhaps any intrigue about Sanders and Kasich will fall away once the evening’s headliner, Michelle Obama, makes her case. Polls suggest the former first lady is even more popular than her broadly popular husband, who will speak Wednesday night. She managed that, in part, by steering clear of the most obvious fault lines in politics. Remember her speech in Philadelphia four years ago. “When they go low, we go high,” she said, without even mentioning the caustic Republican nominee who years before had helped drive the lie that Barack Obama wasn’t constitutionally eligible to serve as president.

Days before the convention's opening gavel, Trump recycled the same tactic against Harris, a daughter of immigrants who is the first Black woman on a major party's presidential ticket and is also of Asian descent. In her case, Trump said he didn't know if she was eligible but wasn't pursuing the matter.

Michelle Obama is uniquely positioned to talk about Democratic ticket. She knows Biden and his wife, Jill, as genuine friends from Biden’s eight years as vice president. The Obamas also know Harris well — but in an example of what can be lost with a virtual convention, Mrs. Obama recorded her address before Biden named Harris his running mate last week. Unless there's a late edit, that means the nation's first Black first lady will miss an opportunity to speak in personal terms about what it means to see the first woman of color nominated by a major party for national office. Compare that to her recollections four years ago in Philadelphia. “I wake up every morning in a house that was built by slaves,” she said at the 2016 convention, “and I watch my daughters, two beautiful, intelligent Black young women, playing with their dogs on the White House lawn.”

HOW TO WATCH: The convention will air from 9 to 11 p.m. Eastern time. The DNC will provide the official livestream online and on its social media channels. CNN, C-SPAN, MSNBC and PBS will air the full two hours. ABC, CBS, Fox News Channel and NBC will air the final hour, from 10 to 11 p.m. The event also will be available via Twitch, Apple TV, Roku and Amazon Fire TV.

RATINGS: Perez, the DNC chair, has promised an “inspiring” convention. But people must watch to be inspired, and no one knows what kind of audience will tune in. Conventions have declined in relevance for years. So, in one sense, the pandemic has given Democrats a license to experiment with what amounts to a slickly produced party infomercial. But lost are the rare big, even viral moments when a nominee, a party luminary or an up-and-comer, perhaps even veering off the teleprompter, makes a searing connection with both the party faithful in the arena and the millions watching at home.