What to watch the first week of the NCAA Tournament 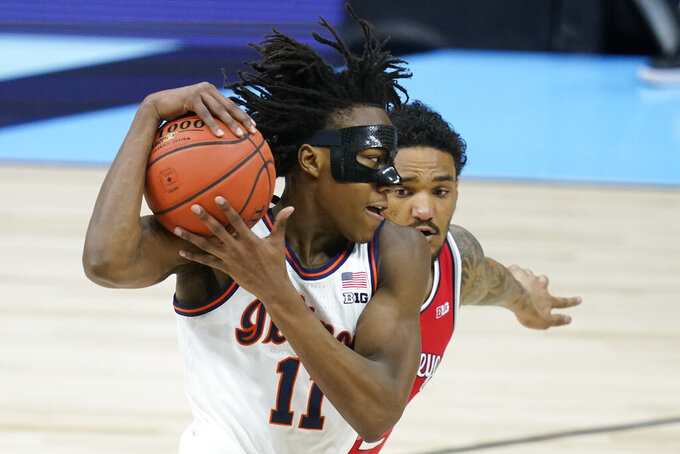 Illinois's Ayo Dosunmu (11) goes to the basket against Ohio State's Musa Jallow (2) during the first half of an NCAA college basketball championship game at the Big Ten Conference tournament, Sunday, March 14, 2021, in Indianapolis. (AP Photo/Darron Cummings) 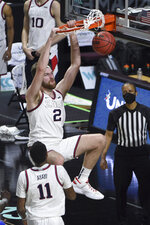 The 2020 NCAA Tournament was wiped out by the coronavirus, robbing the sports world of one of its greatest spectacles.

After a chaotic season through a pandemic, March Madness is back.

You know the players are ready. So are the coaches. The fans, too.

This year's bracket will be like no other, played entirely in Indiana over a span of three weeks.

There's no Duke, no Kentucky, but plenty of new favorites and upstarts who have waited a long time for their chance.

To get you ready, we've got a rundown of the teams, players and games to watch for when the bracket fires up with the First Four Thursday in Bloomington:

Illinois. Tough, talented, loaded. Ayo and Kofi may be the bracket's best 1-2 punch.

Baylor. Shooters everywhere, tenacious on D, lost once all year.

Iowa. Hawkeyes can light it up when they're on and have one of the nation's best players in Luka Garza.

Hartford. The Hawks are in the NCAA Tournament for the first time in 27 years as a Division I program after winning the America East Tournament.

Grand Canyon. Bryce Drew worked some quick magic in the desert, needing one season to lead the Antelopes to the NCAA Tournament for the first time in eight years in DI.

Rutgers. The Scarlet Knights had their dreams crushed last season when the NCAA Tournament was canceled. They got a second chance and made the most of it, playing their way into the bracket for the first time since 1991.

Drexel. The Dragons won 12 games all season, but three of those were in the Colonial Athletic Association Tournament, putting them in the bracket for the first time in 25 years.

Cade Cunningham, Oklahoma State. Potential No. 1 pick in the NBA draft is a scorer, distributor, dominator.

Colgate vs. Arkansas, South Region, Friday. Leave the couch for a minute and you might miss a basket — or 10. And take the over, whatever it is.

Texas Tech vs. Utah State, South Region, Friday. Baskets will be hard to come by between these two defensive-oriented teams.

Loyola Chicago vs. Georgia Tech, Midwest Region, Friday. Ramblers are back for the first time since their 2018 Final Four run. Georgia Tech was the surprise ACC Tournament champ. And hopefully Sister Jean gets a chance to go to Indy.

No. 12 UC Santa Barbara over No. 5 Creighton, West Region. There's a chance the Bluejays could shoot the Gauchos out of the gym. If they're off, watch out for UCSB, which has lost once in the new year.

No. 12 Winthrop over No. 5 Villanova, East Region. The Wildcats are without point guard Collin Gillespie for the rest of the season. The Eagles have lost once all season.

No. 10 Rutgers over No. 7 Clemson, Midwest Region, Friday. The Scarlet Knights may not have been here for a long time, but oddsmakers made them a favorite over the Tigers.

No. 12 Georgetown over No. 5 Colorado, East Region, Saturday. Workers at Madison Square Garden finally figured out who Patrick Ewing is after Hoyas won the Big East title. The Buffaloes may find out, too.

No. 13 Ohio over No. 4 Virginia, West Region, Saturday. The Cavaliers had to bow out of the ACC Tournament due to a positive COVID-19 test and have been bounced early before. The Bobcats have some upset history, too, beating Michigan on the way to the 2012 Sweet 16.

Max Abmas, Oral Roberts. Led the nation with 24.2 points per game and shot 43% from 3 while majoring in biomedical chemistry. He's going to be all right after the tournament no matter what happens.

Isaiah Miller, UNC Greensboro. Can hurt with his scoring (19.3 ppg) and will get up in your grill on D.