What to watch for in Pennsylvania governor's budget proposal 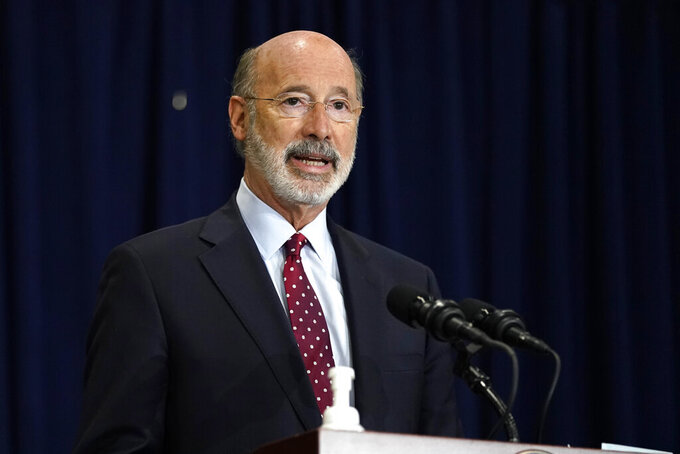 On Tuesday, the Democrat will deliver his seventh budget proposal to Pennsylvania’s Republican-controlled Legislature, facing a pandemic that has helped spawn a projected multibillion-dollar state operating deficit and other liabilities, including fast-expanding Medicaid rolls, new debts and a cash crunch that let other problems fester.

Still, nobody in Harrisburg is talking about tax increases or spending cuts to balance the budget.

Rather, Wolf is hoping that more federal pandemic aid will rescue the state's finances until the economy recovers.

“I think we should have a strong bounce-back, and that would make moving forward really good, but we have some one-time challenges in this budget and a lot of it is riding on what the federal government does," Wolf told a Greater Philadelphia Chamber of Commerce audience this month.

Underscoring the unpredictability of the situation, Wolf told reporters Thursday, “We’re all flying in an area of unknowns.”

The budget for the fiscal year beginning July 1 is being launched into the state Capitol's highly political blame game over the government's coronavirus response.

House Majority Leader Kerry Benninghoff, R-Centre, suggested that Republicans will look to avoid funding cuts — “We keep our commitments to those that we fund,” he said — but also downplayed expectations for a federal rescue.

“It would be irresponsible for us to think we should just sit back and expect more money coming from Washington," he said.

“I’m seeing extremely positive signs from the federal government to do what it is that we need Joe Biden and Kamala Harris to do," Hughes said.

Five things to watch in the governor’s plan:

The current year’s budget plan was approved at $33.1 billion, but that’s not the whole story. Federal coronavirus recovery aid is lowering the reliance on state tax dollars by about $3.4 billion.

The Independent Fiscal Office, a nonpartisan legislative agency, is projecting that the state will need to spend slightly above $37.7 billion to maintain its current programs, with spending particularly driven by the rising cost of health care for poor people and long-term care for older adults.

That amounts to a $2.5 billion projected deficit, up from the Independent Fiscal Office's deficit projection of $1 billion before the pandemic.

“The COVID pandemic really downshifted the economy, so we lost a full year of economic growth,” said Matthew Knittel, the office's director.

Of course, budget-makers routinely use hundreds of millions of dollars in transfers from off-budget accounts, payment delays and other one-time maneuvers to balance the books. This year likely will be no different.

The state’s tax collections were ahead of schedule through the first six months of the fiscal year. As of Jan. 1, the state had reported collecting $18.5 billion, almost a half-billion dollars, or nearly 3%, above estimates, toward its initial full-year estimate of $36.3 billion.

Persistent cost increases for health care, prisons and pensions can be expected to absorb much of the state’s natural growth in tax revenues.

Highway and mass transit funding remains a problem, even after a 2013 law raised more than $2 billion a year by making Pennsylvania's fuel taxes among the nation's highest.

Motorist fees and fuel taxes that fund highway construction also still pay for more than half of the state police’s nearly $1.4 billion budget, a sore spot among highway builders, and Wolf is warning that fuel-efficient cars are eating into those fuel taxes.

Meanwhile, a public transit funding arrangement funded by turnpike tolls is scheduled to shrink from $450 million to $50 million next year, pushing the tab to the deficit-strapped treasury.

Amid the pandemic, public schools did not get a funding increase from the state this year. The state's school construction subsidy program is dormant, as are efforts to fix a charter school-funding scheme that public schools view as vastly unfair and debilitating to their finances.

At the same time, Pennsylvania is barely using a funding formula it designed to iron out inequities in how it funds the poorest public schools.

School districts have, however, received billions in federal pandemic aid, but school boards will want to see Wolf propose a funding increase for them.

“I'm really hoping that the governor has a robust proposal for public education next Tuesday, because the school children deserve it and we have to figure out how to get them the help they deserve,” Hughes said.

Pennsylvania is laboring under an estimated $67 billion debt in its two large public-sector pension systems to repay the next 30 years, a cost that absorbs about 10% of the state's general tax collections.

The state has borrowed $800 million thus far this fiscal year in short-term financing to pay its bills and also must repay more than $1 billion in unemployment compensation debt from the pandemic to the federal government.

Meanwhile, Pennsylvania is wrestling with daunting long-term demographics: an increasing number of residents older than 65, which is rapidly inflating costs for medical and long-term care, and a shrinking working-age population that can support it.