What Would Have Been: MLB All-Star Game and British Open 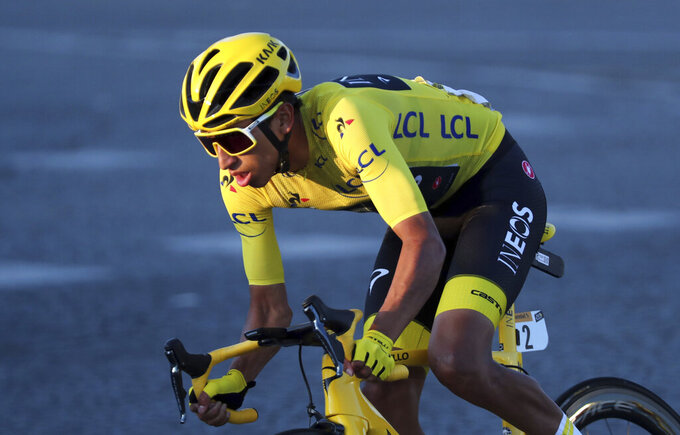 FILE - In this July 28, 2019, file photo, Colombia's Egan Bernal wearing the overall leader's yellow jersey, rides on the Champs-Elysees in Paris during the 21st stage of the Tour de France cycling race. It has been 35 years since a French cyclist rode down Paris' Champs-Elysees in the 21st and final stage on way to winning the grueling three-week Tour de France. Julian Alaphilippe won two stages and wore the yellow jersey as the overall Tour leader for 14 days last year. But Bernal became the first Latin American winner of the race, and at 22 the youngest post-World War II winner of the Tour. The final stage was supposed to be Sunday, but will now be Sept. 20 after the Tour was pushed back. (AP Photo/Thibault Camus, File)

Instead of MLB All-Stars gathering this week for the Midsummer Classic at Dodger Stadium, players who haven't opted out of the season are at their home ballparks. They are going through summer camp before they finally get to open the pandemic-delayed season July 23-24. There also will be no final ride in Paris. While NBA and NHL players are also getting back to practice to resume their seasons, The Associated Press looks at some of the sporting events that had been scheduled the week of July 13-19:

MLB: Dodger Stadium will have to wait another two years to host the All-Star Game for the first time since 1980. Major League Baseball has already said that Los Angeles will now host the Midsummer Classic in 2022, which was the next available slot. Next year's game was already scheduled for the Atlanta Braves' Truist Park that opened in 2017. Earl Weaver and Chuck Tanner were the managers in the 1980 game at Dodger Stadium that the National League won 4-2, when Ken Griffey Sr. homered and was the game's MVP.

The American League has won the last seven All-Star Games, and 19 of the last 23. There was a tie in 2002, and the NL won three in a row from 2010-12. At least the All-Star Game no longer determines home field advantage for the World Series, like it did from 2003-16, so the absence of the game won't be problematic in that sense.

TRIVIA BREAK: When was the last time MLB didn't hold an All-Star Game, and where was that game supposed to be played? (Answers below).

BRITISH OPEN: Golf's oldest championship isn't being played for the first time since 1945. The British Open was scheduled for this week before getting canceled in April. After a pause for the pandemic, the R&A plans to still hold the 149th Open at Royal St. George’s next July. By effectively pushing its schedule back one year, the 150th Open will be played at St. Andrews in 2022. Irishman Shane Lowry had a six-stroke victory last year at Royal Portrush in Northern Ireland.

TOUR DE FRANCE: It has been 35 years since a French cyclist rode down Paris' Champs-Elysees in the 21st and final stage on way to winning the three-week Tour de France. Julian Alaphilippe won two stages and wore the yellow jersey as the overall Tour leader for 14 days last year. But Colombian cyclist Egan Bernal became the first Latin American winner of the race. This was supposed to be the final week, with the final stage Sunday. The Tour is now scheduled for a Sept. 20 finish.

TRIVIA ANSWER: This is the first time since 1945 without an MLB All-Star Game, and only the second time since the first All-Star Game in 1933. Travel restrictions because of World War II kept that 1945 game from being played at Fenway Park in Boston, though it was played there the following season.