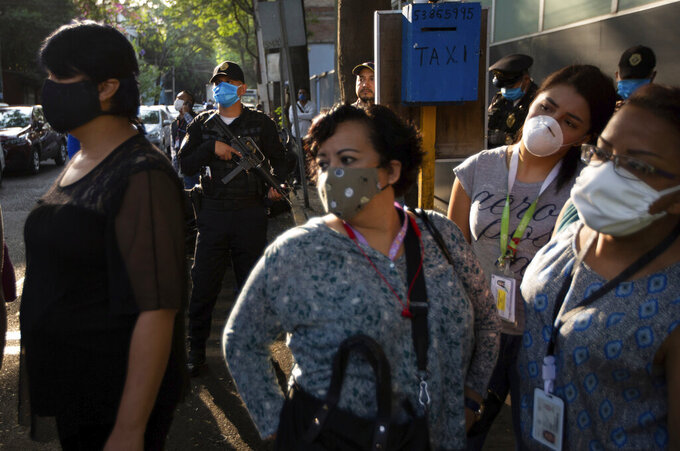 Nurses attend a demonstration outside a public hospital to protest their lack of protective gear, in Mexico City, Tuesday, April 21, 2020. The government has extended its social distancing measures through the end of May, predicting that the cases of the new coronavirus will peak in Mexico in about three weeks. (AP Photo/Fernando Llano)

Iconic events like the U.S. national spelling bee in June, Spain’s Running of the Bulls in July and Germany’s Oktoberfest are being scrapped because of the coronavirus pandemic, even amid growing impatience over shutdowns that have thrown millions of people out of work.

The push to reopen has set off warnings from health authorities and politicians about a crisis that by Tuesday had killed well over 170,000 people worldwide. Experts say the crisis is far from over and relaxing the stay-at-home restrictions too quickly could enable the virus to surge.

Meanwhile, a nearly $500 billion coronavirus aid package flew through the Senate on Tuesday after Congress and the White House reached a deal to replenish a small business payroll fund and provide new money for hospitals and testing. Economic damage from the pandemic has mounted as stocks dropped around the world and oil prices suffered a historic collapse.

Here are some of AP’s top stories Tuesday on the world’s coronavirus pandemic. Follow APNews.com/VirusOutbreak for updates through the day and APNews.com/UnderstandingtheOutbreak for stories explaining some of its complexities.

— Oil prices crumpled even further Tuesday, and U.S. stocks sank to their worst loss in weeks as worries swept markets worldwide about the economic carnage caused by the pandemic. The spotlight was again on oil, where prices have plummeted because very few people are flying or driving, and factories have shut amid widespread stay-at-home orders.

— Setting aside their differences f or at least an afternoon, President Donald Trump and New York Gov. Andrew Cuomo agreed in an Oval Office meeting Tuesday to work to double coronavirus testing in the hard-hit state over the next few weeks. The meeting marked a sharp shift in rhetoric from just days earlier.

— A malaria drug widely touted by President Donald Trump for treating the new coronavirus showed no benefit in a large analysis of its use in U.S. veterans hospitals. There were more deaths among those given hydroxychloroquine versus standard care, researchers reported after the study of 368 patients.

— Trump announced he would be placing a 60-day pause on the issuance of green cards in an effort to limit competition for jobs in a U.S. economy wrecked by the coronavirus. Already, almost all visa processing by the State Department has been suspended for weeks because of the pandemic.

— The loose network of Facebook groups spurring protests of stay-at-home orders across the country have fast become a hotbed of misinformation, conspiracy theories and skepticism around the coronavirus pandemic. Launched in recent weeks by pro-gun advocacy groups and conservative activists, the pages are repositories of Americans’ suspicion and anxiety — often fueled by notions floated by television personalities or President Donald Trump himself.

— A Louisiana pastor has been arrested on an assault charge after after he admitted to driving his church bus toward a man who has been protesting his decision to continue holding mass gatherings at church. Police say Tony Spell turned himself into the department and was arrested on charges of aggravated assault and improper backing.

— $5 billion: U.S. hog farmers have endured an estimated $5 billion in losses for the industry amid restaurant closures.

— HOME TEST: U.S. health regulators on Tuesday OK’d the first coronavirus test that allows people to collect their own sample at home, a new approach that could help expand testing options in most states. The test from LabCorp will initially only be available to health care workers and first responders under a doctor’s orders.