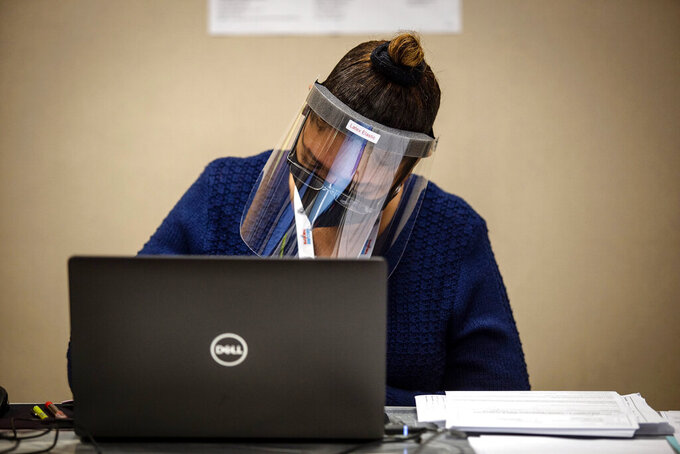 A poll worker wearing a protective shield is seen at the Dunwoody Library on Monday, May 18, 2020, in Dunwoody, Georgia. Georgians were greeted with a few new procedures as they participated in the first day of in-person early voting for the state's June 9 primaries with the coronavirus pandemic still raging. (AP Photo/Ron Harris)

Europe reopened more widely on Monday, allowing people into the Acropolis in Greece, shops in Italy, markets and museums in Belgium, golf courses in Ireland and beer gardens in Germany while its leaders discussed how to salvage hallowed summer vacations.

New infections and deaths have slowed considerably in Europe, where some countries started easing lockdowns a month ago and even the harshest shutdowns — such as those in Italy and Spain — have loosened significantly. Many nations are now preparing to open their borders next month, trying to sketch out the parameters for a highly unusual summer tourist season.

Here are some of AP’s top stories Monday on the world’s coronavirus pandemic. Follow APNews.com/VirusOutbreak for updates through the day and APNews.com/UnderstandingtheOutbreak for stories explaining some of its complexities.

— An experimental vaccine against the coronavirus showed encouraging results in very early testing, triggering hoped-for immune responses in eight healthy, middle-aged volunteers. Study volunteers given either a low or medium dose of the vaccine by Cambridge, Massachusetts-based Moderna Inc. had antibodies similar to those seen in people who have recovered from COVID-19.

— President Donald Trump said Monday that he is taking a malaria drug to protect against the new coronavirus, despite warnings from his own administration that it should only be administered for COVID-19 in a hospital or research setting due to potentially fatal side effects.

— The World Health Organization has agreed to l aunch an independent probe into how it managed the international response to the coronavirus, which has been clouded by finger-pointing between the U.S. and China over a pandemic that has killed over 300,000 people and leveled the global economy.

— More than 130,000 autoworkers returned to factories across the U.S. for the first time in nearly two months Monday in one of the biggest steps yet to restart American industry. Detroit’s Big Three — Fiat Chrysler, General Motors and Ford — as well as Honda and Toyota all had screening procedures in place at dozens of factories that reopened from the Great Lakes states south to Tennessee and Texas and out west at Tesla’s factory near the San Francisco Bay.

— The coronavirus pandemic has created a huge need for healthcare in the U.S., but it also is delivering a devastating financial blow to that sector. COVID-19 worries have kept patients away from doctors’ offices and forced the postponement and cancellation of non-urgent surgeries. Hospitals, health systems and doctors have been forced to lay off staff, cut costs and hope a return to normal arrives soon.

— Italy and the Vatican allowed the first public Masses to be celebrated since March as coronavirus restrictions eased further, following a sharp confrontation between church and state over limits on worshiping in the era of COVID-19. Guards in hazmat suits took the temperature of the faithful entering St. Peter’s Basilica, where Pope Francis celebrated an early morning Mass for a handful of people to commemorate the centenary of the birth of St. John Paul II.

— Chinese President Xi Jinping says China will provide $2 billion over two years to help with the response to the coronavirus pandemic. Xi’s announcement by videoconference at the start of the World Health Organization’s annual assembly marks a sharp contrast to the United States. The Trump administration has announced a suspension of its funding for WHO over its alleged mishandling of the outbreak and praise of China’s response.

— 5,242: India recorded its biggest single-day surge in coronavirus cases on Monday, attributed largely to migrant workers returning home after losing their jobs in India’s population centers. The 5,242 new cases and 157 deaths due to COVID-19 in the last 24 hours took the country’s infection tally to more than 96,000, the most in Asia. It now has 3,029 fatalities.

— WEDDING GIFTS: They had dreams for a grand wedding, but Sri Lankan newlyweds instead celebrated their love by feeding the poor. After registering the marriage with a few close family and friends, Darshana Kumara Wijenarayana and his fiance, Pawani Rasanga, visited 50 households with boxes of food, each containing rice, sugar, tea powder, onions, potatoes, lentils, salt, soybeans and noodles.

— CAMPAIGN FOR THE KIDS: “This Is Us” stars Mandy Moore and Justin Hartley will co-host NBC’s Red Nose Day special on Thursday night to raise money and awareness for children in need. Funds raised by the campaign will be directed to help combat the effect of COVID-19 on youngsters and the organizations that aid them.