What's that behind you? On virus-era TV, home backdrops star 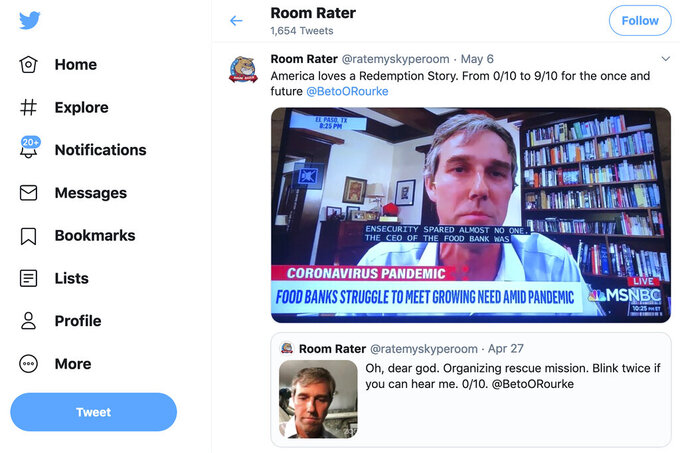 This image taken from the Room Rater Twitter account shows Beto O'Rourke appearing on MSNBC. Ever since the coronavirus forced public figures to speak to the masses from their dens, living rooms and kitchens, television has given us a glimpse into their lives that we never got when they were in the studio. (Twitter page of Room Rater via AP) 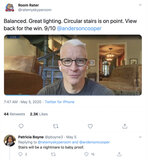 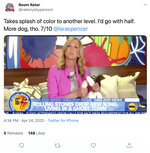 Those who saw conservative commentator Bill Kristol on television one recent night may not remember what he said. But they'll never forget the magnificent mess of a bookcase behind him.

And there's a growing army of viewers with just one question after tuning into any number of interviews that political commentator John Heilemann has given in recent weeks: What fruit is in those bowls over his shoulder?

Ever since the coronavirus forced pundits, reporters, analysts and sports figures to speak to the masses from their dens, living rooms and kitchens, television has given us a peek at the famous and not-so-famous — a glimpse we never got when they were in the studio.

Watching TV these days is giving the viewers the same feeling that potential homebuyers get when they walk into a house for sale and head straight to the living room to check out the books and albums.

“It gives people a little more of a personal connection with the people on television. And when you have a personal connection with someone you usually pay a little more attention to what they're saying,” said Darlene Schwieterman, a 71-year-old retired human resources manager in Vancouver, Washington, who has been particularly impressed with former U.S. Sen. Claire McCaskill's kitchen.

Kelly Justice, a bookstore owner in Richmond, Virginia, couldn't agree more. Except for the part about paying attention.

“I don't think I heard a word he said," Justice recalled of a recent night when she was far more interested in Stephen Colbert's bookshelf than anything happening on his show. But, she pointed out, “I know exactly what he would need if he came into the store.”

Matt Guthrie, a high school history and literature teacher in Phoenix, jokes that the pandemic has allowed him to satisfy a lifelong fascination with what people are reading without getting off his couch: “I get to be all judgmental about what they’re reading, think, ‘Oh, that’s crap.’”

Schwieterman, Justice and Guthrie have company. In a matter of weeks, the number of followers of a new Twitter page that judges online decor called “Room Rater” has skyrocketed to more than 145,000.

On the site, rooms are graded on a 10-point scale. The harshest criticism gravitates to those in front of blank walls that look to the Room Rater like hostage videos. Also getting low marks: things that probably should remain hidden — like what appears to be Beto O'Rourke's basement. “Oh, dear god,” writes the Room Rater. “Organizing rescue mission. Blink twice if you can hear me.”

“Room Rater” co-creator Claude Taylor thinks he's tapped into a desire to peek behind a curtain that's been around long before Dorothy ever met the Wizard of Oz. “It's a window into who these people really are,” he said.

It doesn't hurt that this window is being opened at the exact time when going to movies, baseball games or restaurants is off the table for many.

“People who obsessively watch cable television now obsessively get to peek into the homes of the people they watch obsessively," said Heilemann, editor-in-chief of “The Recount.” He says it all adds up to an “intimacy" that wasn't there before.

That intimacy was on display during last month's NFL draft, typically held in a public place with players dressed in their finest darting onto a stage like stars accepting Oscars the minute their names are announced.

This year, though, produced a look at NFL Commissioner Roger Goodell's den and the living rooms of players, coaches and executives. They even got a look at a bathroom in one coach's home — complete with someone who apparently forgot to close the door.

The ratings were the best they've ever been. Yes, people are hungry for sports, but perhaps the padlocked stadiums don't explain everything.

“What people are looking for, hungry for, is something that appears spontaneous and behind the scenes,” said Irving Rein, a professor of communication studies at Northwestern University. “You are seeing these players in a natural setting, seeing what kind of life produced these star players."

The online rooms have also created a connection between interviewees and viewers. Take New York Times reporter Peter Baker. After Room Rater commented that the picture hook behind him had no picture, Baker tweeted that he had been sufficiently shamed and asked his wife to put something on the wall. The move impressed Room Rater enough to raise Baker's score (before dropping it again because one picture was hanging from the back of a door).

Others are more proactive.

CNBC analyst Bob Pisani has taken to subbing out his posters of the Grateful Dead, Jimi Hendrix and other rock stars with each appearance. During the NFL draft, analyst Desmond Howard made sure that when it was his turn to talk, a different record album was in view.

And Singaporean academic and former diplomat Kishore Mahbubani wants everyone to know he now recognizes that positioning himself for an interview so that one copy of his new book, “Has China Won?” could be seen over his left shoulder and another over his right was a bit much. “I learned my lesson,” he said after critical comments from friends.

Kristol relocated to a “more presentable” living room for subsequent appearances, though he said the move from his study prompted emails that asked him what kind of message was he trying to send with the book about Mozart behind him. Still, that one appearance prompted a suggestion from family members to use some of this time at home to tidy up his study.

“I think I should so I can find things better,” he said. “Not too much, but a bit of cleaning.”

Heilemann has taken a different tack. “Limes and jalapeno peppers,” he tweeted when questions about what was behind him popped up on Room Rater. And, he admitted in an email to the AP: “Yes, I do sometimes switch the fruit around (and add the occasional Easter egg) just to mess with the home-backdrop obsessives.”