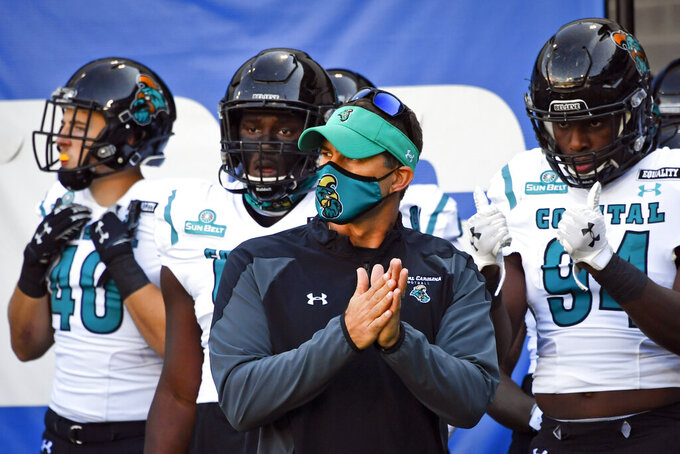 FILE - In this Saturday, Oct. 31, 2020, file photo, Coastal Carolina head coach Jamey Chadwell waits to lead his team onto the field before an NCAA football game against Georgia State in Atlanta. An unusual college football season has produced some unexpected unbeaten teams dotting the AP Top 25 with about a month left. Led by No. 7 Cincinnati and No. 8 BYU, five teams from outside the Power Five conferences have yet to lose. (AP Photo/John Amis, File)

Before the pandemic forced most schools to tear up their schedules, Marshall had an interesting September slate.

The Thundering Herd was set to play rebuilding East Carolina and perennial MAC contender Ohio on the road and Pittsburgh and Boise State at home in Huntington, West Virginia.

None of those games were played, which is too bad because Marshall has a team that could have won them all.

No. 15 Marshall is one of five teams from outside the Power Five that are unbeaten and ranked in the AP Top 25, along with No. 7 Cincinnati, No. 8 BYU, co-No. 15 Coastal Carolina and No. 21 Liberty.

This roiled season, with far fewer nonconference games and 40% of major college football starting well into the fall, created an opportunity for these interlopers to climb the rankings as they pile up victories. It also cost them many of their toughest games, lowering the degree of difficulty in reaching those perfect records and providing fewer opportunities to prove skeptics wrong.

“I've played or coached on three national championship teams and been around a lot of really good football teams,” Marshall coach Doc Holliday said this week. “On any given day, this team has the pieces in place to play with anyone in the country.”

The College Football Playoff selection committee will weigh in Tuesday night for the first time this season. While the Top 25 is good for bragging rights, the CFP rankings ultimately determine who gets to play in the season's biggest and most lucrative postseason games.

Traditionally, the committee has not shown quite as much love to teams from outside the Power Five, especially when the rankings are first revealed.

American Athletic Conference Commissioner Mike Aresco has been outspoken about what he believes is the committee's tendency to slight the best teams in his league.

“What I don't like is just because there's a P5 that has one loss, they seem to reflexively put them ahead of our undefeated teams,” Aresco said. “I hope that doesn't happen.”

Aresco was quick to acknowledge Cincinnati is no lock to get to next Tuesday's rankings unbeaten with a trip to UCF on tap Saturday.

Aresco also said he hopes the committee takes into account the number of games played when it ranks teams next week. Big Ten teams will have played no more than five games after this weekend. The Pac-12 is on week three of its season.

The highest-ranked champion from a Group of Five conference in the committee's final rankings Dec. 20 is guaranteed a spot in a New Year's Six bowl. The AAC has taken that spot four times in six CFP seasons. Aresco is hoping for more than that this time around, especially if the Bearcats stay unbeaten.

What are the reasonable expectations for the five unexpected unbeatens as the season winds down?

There is a legitimate path to the playoff and it doesn't requires outlandish results. For example: No. 1 Alabama wins out. No. 2 Notre Dame completes a sweep of Clemson. No. 3 Ohio State breezes through the Big Ten.

What becomes of the Bearcats if they do lose an AAC game, but still win the league? Can they fend off the possibility of an undefeated Coastal Carolina or Marshall for the G5's New Year's Six spot? Probably, but don't lose more than once.

The Cougars are an independent and not eligible for that guaranteed spot that goes to the top-ranked Group of Five champion in the big bowls. They have to hope the committee ranks them high enough to get them into one of the high-profile games. Top 12 should do it.

Next week's ranking will be key for BYU because it has only one more game left after this weekend: San Diego State on Dec. 12. The Cougars are still looking for games to beef up a resume short on rigor.

The Pac-12 has announced it will allow teams to schedule nonconference games on short notice if league opponents have to cancel. Maybe some team's COVID-19 misfortune creates an opportunity for BYU to boost its strength of schedule in December.

The Chanticleers, picked last in the Sun Belt, have been a fun story and a quality team. They have at least two major tests left: Defending Sun Belt champion Appalachian State on Saturday and Liberty on Dec. 5. Who would have guessed the latter had a chance to be a battle of unbeatens when it was scheduled in August?

Win out, including a second victory against No. 24 Louisiana-Lafayette in the Sun Belt title game, and the Chants can make solid case to become the first team from its conference to play in a New Year's Six game.

The Thundering Herd clawed back some of the value they lost from their original nonconference schedule when they booked — and beat — App State.

They still have at least two more Conference USA regular-season games and a league title game to take care by Dec. 19. The thought of Marshall throwing together a game against BYU sounds fun, but realistically it would be tough to pull off.

“I’d love to play them,” Holliday said. “Ultimately, what you’re trying to do when you're in a conference is win a conference championship. The question you have to ask yourself is: Is playing somebody out of conference right now, is that worth it? Maybe it is?"

Marshall's best team since Holliday went 13-1 in 2014 is in danger of landing in a bowl game unbefitting their quality.

It took a while for Hugh Freeze's team to catch on as it played a weak early season schedule and, unlike BYU, wasn't nearly as dominant.

Now the Flames have two victories against ACC teams and could add another Saturday at North Carolina State. An independent, the Flames have no path the G5's reserved spot in the New Year's Six.

The best resume Liberty could put together doesn't look like something the committee would be especially impressed with. It will be interesting to see where the Flames rank relative to BYU next week if they do beat NC State.