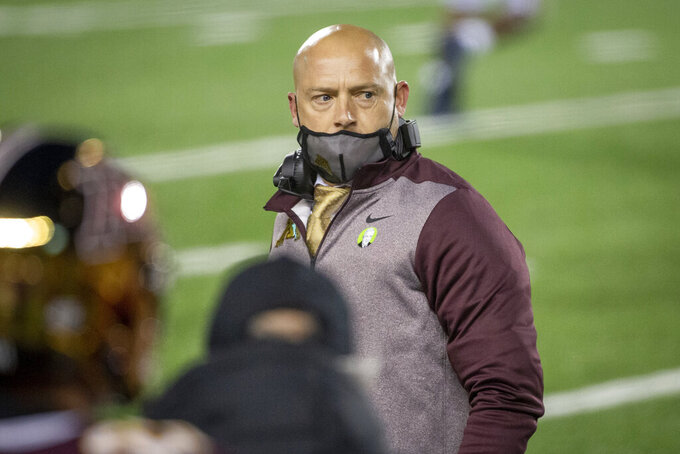 FILE - In this Oct. 24, 2020, file photo, Minnesota head coach P.J. Fleck looks at his bench during an NCAA college football game with Michigan in Minneapolis. Minnesota is among 10 of the 14 Big Ten football teams sitting at two wins entering the final weekend of the regular season. The statistical anomaly begs the question of whether it's difficult for those teams to stay motivated in a season that brought unique challenges because of the coronavirus pandemic. (AP Photo/Bruce Kluckhohn, File)

Minnesota has had its last two games canceled because of COVID-19 issues, more than 20 players will be unavailable for this week's game and the Gophers' best player has opted out.

It begs the question: How motivated are the Gophers to play Nebraska on Saturday and next week’s game against a yet-to-be-announced opponent?

P.J. Fleck understands why he's asked. His Gophers are among 10 Big Ten teams sitting at two wins in this abbreviated season, and the question could be asked of any of the 10.

Uncertainty about whether there would be a season, stoppages during the season and daily COVID-19 testing and strict safeguards put in place to avoid the virus have made the last 10 months a grind. One might wonder if players, many of whom are mentally and physically beaten down, would just like to get the season behind them and move on to next year.

“Anybody who’s here cares, period,” he said. “It’s too hard of a game not to invest as much as you do and not care. I think there have been challenges that have challenged every single one of us, of how much it matters to all of us and what truly matters to us.”

Like Fleck, Nebraska coach Scott Frost isn't worried about a dwindling care factor among his players.

“I think we have more guys on the team now that love football, that certainly helps,” he said. "I think we’ve got guys that care about each other more. They still feel like they’re having fun playing and have something to prove.”

Half the two-win teams have fallen well short of preseason expectations.

Penn State was No. 7 in the preseason Top 25 but once the Big Ten season started in late October lost its first five games for the first time in program history. Wisconsin, Michigan and Minnesota also went into the season ranked, and Nebraska expected to make a jump in Frost's third year.

Penn State coach James Franklin spoke openly about his job performance being affected negatively because he's been separated from his family to help protect his immunocompromised daughter from the virus.

The Nittany Lions also have had quarterback issues, as have Michigan, Purdue, Illinois and Nebraska.

“I think it’s hard when you have to play multiple guys,” Fitzgerald said. “The locker room is kind of, ‘Who’s our leader, who are we following?' Do they exude confidence, do they make everybody around them better, and do they drive and score touchdowns? If that’s not happening, it’s hard to get confidence offensively and that kind of erodes the confidence in the locker room. I don’t want to speak for other teams because I’m not with them, but that’s what happened with us.”

The possibility of achieving bowl eligibility is a carrot that can keep a sub-.500 team from just playing out the string. That doesn't apply as much this year because the NCAA is not requiring a minimum number of wins for a team to be selected.

Ten bowls have been canceled to date because of the pandemic, leaving seven possible slots available to the Big Ten.

Ohio State, Indiana, Northwestern and Iowa are on track to lock up spots among the top four possibilities — the College Football Playoff, a New Year's Six game and the Citrus and Outback.

There will be three to five three-win teams after this week, and they'll be at the front of the line for the Big Ten's remaining bowl bids.

Minnesota's Fleck takes a macro view when it comes to his players level of stick-to-itiveness as this most challenging of seasons winds down.

“This care meter, it's not just about football."