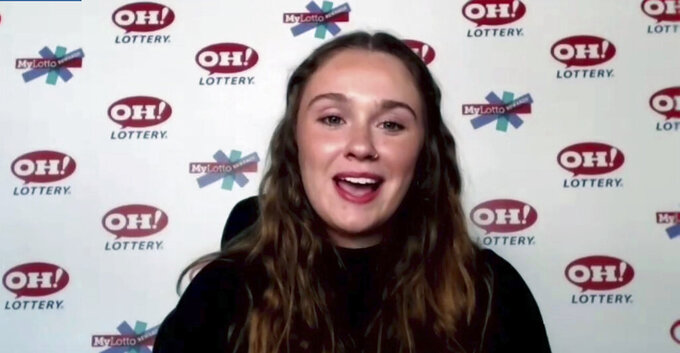 In this still image, taken from video by the Office of the Ohio Governor, Abbigail Bugenske, 22, from Cincinnati, the first winner of Ohio's first $1 million Vax-a-Million vaccination incentive prize, is interviewed during a news conference, Thursday, May 27, 2021. (Office of Ohio Governor via AP)

COLUMBUS, Ohio (AP) — The first winner of Ohio's first $1 million Vax-a-Million vaccination incentive prize was driving to her family's home in suburban Cleveland when she received a call about the good news — from Gov. Mike DeWine.

A few minutes later Abbigail Bugenske was in her parents' house screaming so loudly they thought she was crying.

“A whirlwind,” Bugenske, 22, said Thursday morning during a news conference. “It absolutely has not processed yet. I am still digesting it — and I like to say that it feels like this is happening to a different person. I cannot believe it.”

Bugenske is a mechanical engineer working for GE Aviation in suburban Cincinnati, and has no plans to quit her job. She grew up in Shaker Heights near Cleveland and is a 2020 graduate of Michigan State University. She said she plans to donate to charities but then invest most of it.

She was on her way to Cleveland to look at used cars when she got the word, she said, and added: “I think buying a used car is still in my future.”

The winner of a full college scholarship was eighth grader Joseph Costello of Englewood near Dayton.

“Very excited,” Costello said as he sat between his parents, Colleen and Rich, during the virtual news conference. Although it's a long way off, Joseph said he's thought about Ohio State or Miami of Ohio for college.

Colleen Costello said she got the call from the governor as she left work Wednesday. At first she thought it was a recording, then realized it was DeWine himself.

"I was really thankful at that moment that there was a bench nearby, because I needed to sit down,” she said.

DeWine visited with the Costello family in person along with his wife, Fran DeWine, on Wednesday, after the announcement. He said he didn't know the names of the winners until shortly before he made the calls.

Bugenske said she received the Moderna vaccine as soon as she was eligible, long before the lottery was announced. The Costellos said they were already vaccinated and had planned to have their children vaccinated by the end of the month, but the lottery announcement inspired them to move those appointments up.

During a scheduled visit to Cleveland Thursday, President Joe Biden said, “Ohio has a new millionaire! I tell you what, who wouldathunk it, a million bucks for getting a vaccine? But it’s working.”