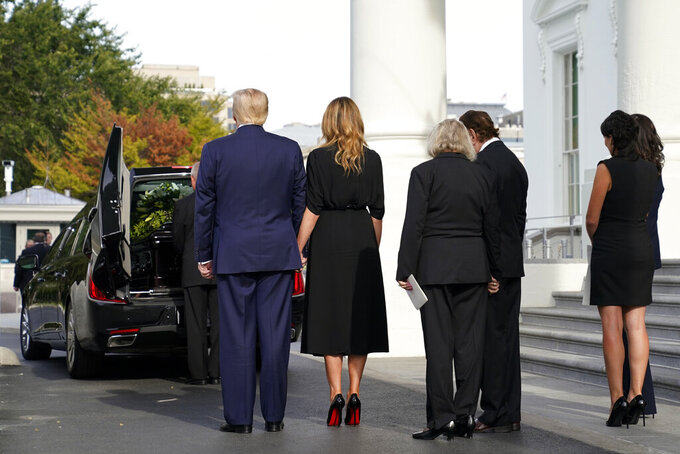 President Donald Trump and first lady Melania Trump hold hands as they watch the casket of Robert Trump being loaded into the hearse after a memorial service for the president's younger brother at the White House in Washington on Friday, Aug. 21, 2020, in Washington. (AP Photo/Evan Vucci)

WASHINGTON (AP) — Sometimes politics gives way to the personal at the White House. It has seen 18 weddings and at least 10 people are known to have died there, including two presidents and three first ladies.

It served Friday as a place of mourning for President Donald Trump and his family, with a private memorial service for the president's younger brother, Robert, who died last week at 71. The president has described Robert as “not just my brother. He was my best friend."

With bagpipes playing, the president and first lady Melania Trump followed his brother's casket to a waiting hearse in the late afternoon. They stood at attention and held hands for a couple of moments as the casket was placed inside. A few dozen family and friends stood nearby on the White House steps. As the hearse drove away, the president and first lady returned to the residence and some in the group embraced in an effort to provide comfort.

Unlike Willie Lincoln and Calvin Coolidge Jr., Robert Trump did not live at the White House. Nevertheless, it’s completely within the president’s ability to honor him with a service there, said Anita McBride, who served in three presidential administrations, including as first lady Laura Bush’s chief of staff.

“The White House is a very complex place. It’s an office, it’s a museum and it’s a home,” McBride said. “We loan it to the president for the time he or she is living there. Coming from that perspective, we need to be understanding of some decisions that they make in a case like this.”

When Trump explained why he wanted to have a service for his brother at the White House, he said: “I think he’d be greatly honored. He loves our country. He loved our country so much. He was so proud of what we were doing and what we are doing for our country. So I think it would be appropriate."

Robert Trump, a businessman, died Saturday after being hospitalized in New York. The president had visited his brother in the hospital the night before his death.

Robert Trump began his career on Wall Street working in corporate finance but later joined the family business, managing real estate holdings as a top executive in the Trump Organization.

“When he worked in the Trump Organization, he was known as the nice Trump,” Gwenda Blair, a Trump family biographer, told The Associated Press. “Robert was the one people would try to get to intervene if there was a problem.”

In the 1980s, Donald Trump tapped Robert Trump to oversee an Atlantic City casino project, calling him the perfect fit for the job. When that project cannibalized his other casinos, though, “he pointed the finger of blame at Robert,” said Blair, author of “The Trumps: Three Generations that Built an Empire.”

Within a week of the memorial service, Trump will use the White House for another unusual purpose: his nomination acceptance speech. He had hoped to give the speech in Charlotte, North Carolina, or Jacksonville, Florida, but had to cancel because of the coronavirus pandemic. He settled on the White House, and large amounts of scaffolding on the South Lawn indicated it won't be a simple affair.

“That’s not going to go over well with everybody, but in this case, the president will be damned if he does, damned if he’s doesn’t," said McBride, director of the Legacies of America’s First Ladies initiative at American University.

“It’s difficult, I think, for him to have any winning scenario," she said of his choice.