White-knuckle thriller for AMC as it sells stock into frenzy 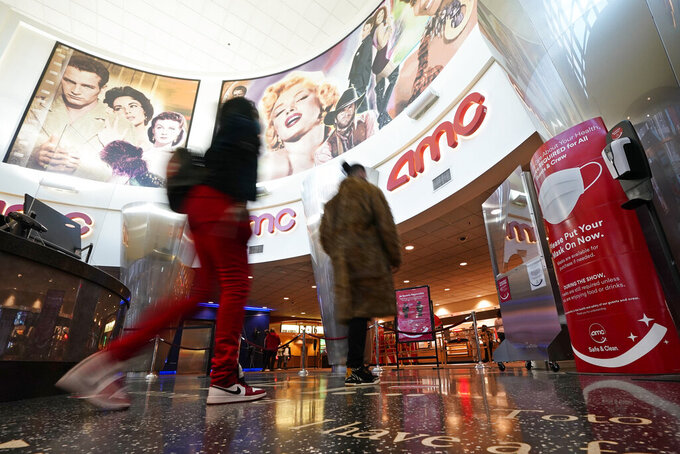 FILE - In this March 15, 2021, file photo movie patrons arrive to see a film at the AMC 16 theater in Burbank, Calif. AMC is looking to sell up to 11.5 million of its shares, as the movie theater operator looks to capitalize on its meme stock popularity. The announcement in a regulatory filing on Thursday, June 3 comes just two days after the company said it was raising $230.5 million through an 8.5 million share sale. (AP Photo/Mark J. Terrill, File)

Got your popcorn? The wild ride for the summer's blockbuster stock, AMC Entertainment, got even crazier on Thursday.

The movie-theater company's stock plunged nearly 40% in the morning after it announced plans to sell 11.6 million shares to raise cash, while warning buyers they could lose all their investment. But it erased the loss in just a few hours. After the stock sale was complete, it climbed above the record closing price it had set a day earlier, only to sink back to a 17.9% loss by the end of trading.

It's the latest stupefying, nearly unexplainable set of moves for one of the “meme stocks” that have rocked Wall Street this year. Many professional investors say AMC, GameStop and other meme stocks have hit heights untethered to reality and are primed for a steep fall, but that's not stopping an army of smaller-pocketed and novice investors from holding their ground and promising to take their prices “to the moon.”

For AMC, that has vaulted its stock price from below $2 early this year to the $50.85 average price that it sold shares for on Thursday. The surge means its total market value climbed above $30 billion, putting it on par with bigger companies like AutoZone and Old Dominion Freight Line, which unlike AMC are making profits and didn't have speculation of bankruptcy swirling around them after the pandemic shuttered theaters last year.

In a filing with regulators, AMC couldn’t give a reason for the rise in its stock price that’s tied to its profit prospects, the usual reason for a stock price to move. The company said it didn’t know how long the reasons behind its stock surge will last, while warning investors: “Under the circumstances, we caution you against investing in our Class A common stock, unless you are prepared to incur the risk of losing all or a substantial portion of your investment.”

The immediate reaction in the market was sour. AMC shares fell as soon as the market opened, and the plunge was so sharp that trading was temporarily halted three times during the morning. A day earlier, its trading had been halted four times when the stock was heading in the opposite direction and nearly doubled.

Other meme stocks also fell, including an 8.5% drop for GameStop. It was the poster child for the phenomenon early this year, when the struggling video-game retailer suddenly surged 1,625% in January. Back then, the maniacal moves for meme stocks shocked Wall Street, but many professional investors expected the fervor to peter out eventually.

Everyone agreed that a new generation of investors was seizing more power in the market, with their ranks growing because of easy-to-use trading apps and zero trading fees. But one big reason for the incoming wave of novices was that the pandemic had left them with little else to do.

When the pandemic eased, the thinking on Wall Street went, those traders would go back to eating out at restaurants, heading to bars and maybe even seeing movies at the theater instead of talking up and bidding up meme stocks.

It didn’t play out that way, at least not yet. Meme stocks did lose momentum following their January supernova, but they began soaring again recently. AMC quintupled in the two weeks through Wednesday, for example. GameStop is back above $250 after dropping from a peak of $347 in late January to $40 a few weeks later.

For their part, many retail investors said on the social media forums that have spurred the meme stocks’ moves that they’ll remain steadfast.

“We can stay irrational longer than they can stay solvent” was the title of one thread on Reddit’s WallStreetBets forum, which has been a central character in the rise of meme stocks.

Other users were asking if BlackBerry would be the next stock of a company overly maligned by professional investors to pop. The company’s stock careened from a 32% gain to a loss of 11% during Thursday morning trading. It ended the day with a gain of 4.1%.

They’re just the latest in a cacophony of crazy swings for meme stocks. AMC’s stock soared 95% Wednesday after it launched a program to share news with its newfound, massive base of fanatical shareholders. The new initiative will offer direct messages from the company’s CEO to retail investors, as well as offer free screenings, discounts and a free large popcorn this summer.

The huge moves for meme stocks have caused some critics to warn of a dangerous bubble, with investors taking excessive risks across financial markets after the Federal Reserve slashed interest rates to record lows.

One encouraging part of all this, though, is that the most worrisome behavior seems to be rolling through different investments rather than inflating the entire market, said Yung-Yu Ma, chief investment strategist for BMO Wealth Management.

He pointed to what are known as “blank-check companies,” which raise money and then hunt for companies to buy. Interest was exploding in these special-purpose acquisition companies early this year, but it’s fallen off recently. He pointed to a similar rise and fall for some of the more obscure cryptocurrencies.

He thinks interest in meme stocks will likewise peter out.

“What happens is you get successive groups of investors that get burned with these things" after seductive runs higher in price yield to sharp drops, he said. "Some people make money, but the ones late to the party get burned, and that’s a recipe for fizzling out eventually.”