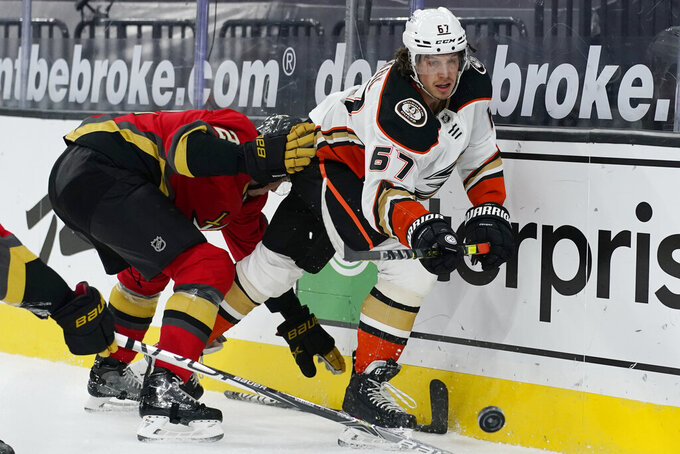 LAS VEGAS (AP) — Zach Whitecloud scored the first game-winning goal of his career late in the third period to lift the Vegas Golden Knights over the Anaheim Ducks 5-4 on Tuesday night.

After the Golden Knights improved to 7-0-1 at home, no players or coaches were made available for interviews on Zoom. The team released a statement that read: “Due to COVID-19 protocols, tonight’s Vegas Golden Knights postgame media availability is cancelled. We will provide additional updates when appropriate.”

Vegas has already had three games postponed and its season halted once, when defenseman Alex Pietrangelo ended up on the NHL’s COVID-19 protocol-related absences list, and three coaches — including head coach Peter DeBoer — were isolated in connection with the league’s virus protocol.

Anaheim made one player available to reporters in a Zoom session that lasted roughly eight minutes, but then canceled the remainder of the postgame availability because the club was “uncomfortable” with the situation, a team spokesperson said.

Vegas defenseman Shea Theodore was involved in a vicious collision with Ducks forward Nicolas Deslauriers in the first period and left for the dressing room but returned for the second period. However, neither he nor forward Tomas Nosek were seen on the bench for the third period.

The Golden Knights have earned 15 of 16 possible points at home this year.

Vegas has scored at least four goals in all but one home game this season, a 2-1 overtime win against Anaheim on Jan. 16. The Golden Knights have outscored their guests 34-21.

After William Carrier sent the puck to the net, Whitecloud’s keen instincts found him skating into the slot where he punched home the rebound for his second goal of the season with 3:56 left in regulation. The goal came after Anaheim scored three straight in the third period to tie it 4-all.

Vegas improved to 8-1 all-time at home against the Ducks, outscoring them 34-17.

Stephenson opened the scoring with his third goal in two games. He skated in on an odd-man rush, took a pass from Mark Stone and went forehand-backhand to beat Miller through the legs.

Stone’s assist was his 400th career point, while Dylan Coghlan got his first NHL point with the secondary helper.

Marchessault redirected a shot from linemate Reilly Smith to make it 2-0 just before the end of the first period.

Tuch pushed the lead to three goals early in the second when he collected a pass from Cody Glass and whipped a backhand over Miller’s glove.

Anaheim finally got on the board when Lundestrom skated into the high slot and beat Fleury with a wrist shot, cutting the deficit to two. Glass picked up his second assist of the game when he dropped the puck off for Roy, who blistered a wrist shot from the top of the right circle that Miller never saw.

Anaheim scored three consecutive goals in the first half of the third period to tie it.

“The comeback, I think it shows our team’s resiliency and that we can play with any team in this league. But there’s no one that’s happy right now,” Terry said. “It’s a mindset thing. It’s been this way since I’ve been here, and I’m guilty of it. We can’t be happy with coming back and making it close and playing Vegas to a close game.

“That’s one of the hardest parts about playing professional hockey, is to take what you learn from games and move on. There’s all kind of lessons from that game tonight. We need to figure out how to get off to a better start.”

Anaheim starting goalie John Gibson suffered a facial laceration as a result of a collision during Monday’s practice but is expected to be available for Thursday’s game against Vegas.

Getzlaf returned to the lineup after missing two games with a lower-body injury.

The Ducks and Golden Knights conclude their two-game set in Vegas on Thursday.