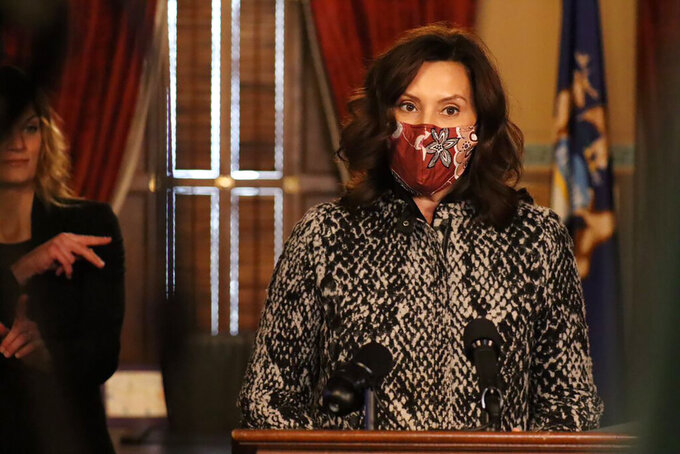 LANSING, Mich. (AP) — Gov. Gretchen Whitmer on Monday extended a partial shutdown of businesses and schools through Dec. 20, rejecting desperate appeals to lift a ban on indoor restaurant dining while the state tries to stop a wave of new coronavirus cases.

“We’ve made progress during this three-week pause ... but there is more work we need to do to protect one another,” she said at a news conference. “Our progress is fragile and we cannot let up yet.”

In-person instruction at high schools and colleges, dine-in eating at restaurants and organized sports will continue to be prohibited, including the completion of fall high school sports tournaments. Entertainment venues such as movie theaters and bowling alleys will remain closed. Indoor residential gatherings are limited to 10 people from two households.

State health Director Robert Gordon said he wants to see a drop in new cases, a lower rate of positive tests and a flattening of or reduction in the number of hospital beds filled with COVID-19 patients.

The priority will be reopening high schools, then entertainment businesses where people can consistently wear masks like theaters and bowling centers if concessions are closed.

“Let me be clear: There’s no formula. These numbers don’t capture some things that matter, like the age of people getting sick or the mix of tests being measured," Gordon said. "You don’t ask your doctor to judge your health by a formula. You don’t judge your family’s financial well-being by one formula. Michigan lives are too important to use a faulty formula.”

Hospital executives applauded the action, saying while hospitalizations had begun to stabilize, dozens of hospitals across the state were reporting critical staffing issues. The Michigan Health & Hospital Association urged the public to “honor” health care workers by getting a flu shot, wearing a mask, avoiding social gatherings and washing hands.

“We are in this together," CEO Brian Peters said.

A top restaurant industry official, though, said he was “exceptionally disappointed,” albeit not surprised.

“We firmly believe there is a better approach — one followed by 45 other states — that doesn’t use blunt force closure of a single industry to resolve a shared crisis,” said Justin Winslow, president and CEO of the Michigan Restaurant & Lodging Association. Restaurant dining rooms will have been closed for 118 days, nearly a third of the year, later this month.

“We maintain that a more nuanced approach that allows for limited indoor capacity with a curfew will result in greater compliance, better health outcomes and substantially reduced economic fallout," Winslow said.

Whitmer said it is no one's fault that restaurants must bar indoor dining. “This is how COVID-19 spreads. It's just that simply — the science of the virus," she said.

The current restrictions, many of which were in place earlier in the pandemic, took effect Nov. 18.

More than 4,100 people were hospitalized with symptoms, including about 500 on ventilators.

Whitmer said the administration is “very worried” that Thanksgiving could have a “significant" effect on cases and hospitalizations. The state will start to see the impact Thursday, two weeks after the holiday, she said.

A group representing Catholic and other religious high schools quickly challenged the lengthened order in federal court, saying the prohibition on face-to-face classes is an unconstitutional restriction on religion.