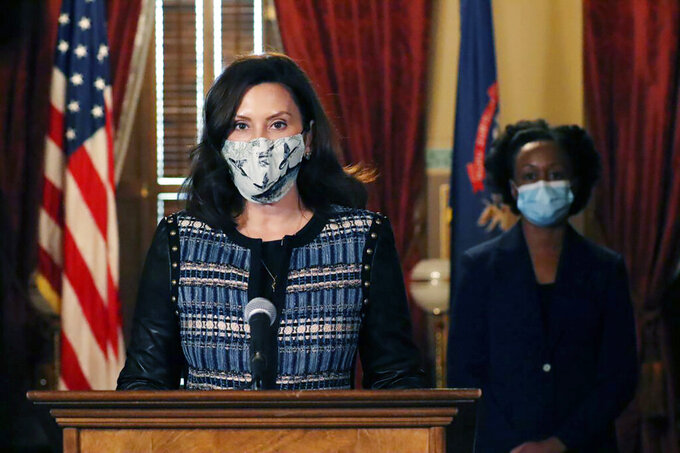 In a photo provided by the Michigan Office of the Governor, Gov. Gretchen Whitmer addresses the state during a speech in Lansing, Mich., Thursday, Nov. 5, 2020. The governor said she sent a letter to Republican lawmakers this week asking them to pass a bill to require residents wear masks in indoor places and crowded outdoor areas. (Michigan Office of the Governor via AP)

A state emergency order already requires people to wear masks in indoor public places and crowded outdoor areas. But the Democratic governor said compliance might improve with bipartisan support from the GOP-led Legislature.

Her plea for help came as lawmakers opened a lame-duck session following the election, in which Republicans retained their majority in the state House. They also control the Senate.

“The Legislature has said time and time again that they want to have a role, that they really want to be a partner in fighting this virus,” Whitmer said in a video news conference, calling for a statewide mask law to be the first order of business when lawmakers reconvene.

Rep. Jason Wentworth, a Republican who will become House speaker in January, said Whitmer has failed to collaborate with lawmakers for months.

“It looks more like a press stunt to me than it does an actual policy," Wentworth told reporters at the Capitol in Lansing.

More than 197,800 cases of COVID-19 and 7,470 resulting deaths have been confirmed in Michigan, according to the state Department of Health and Human Services. And 5,710 were confirmed Thursday — the highest daily total yet.

About 43,000 diagnostic tests were performed daily over the past week, she said. But the rate of positive results has been rising for the past five weeks and is now at 7.5%.

More than 1,900 people in Michigan were in the hospital with the virus as of Wednesday — nearly four times as many as at the end of August, Khaldun said.

Models suggest that unless Michigan residents alter their behavior, up to 100 will die each day from the virus by the end of December, she said.

“We are really at a tipping point right now,” Khaldun said, warning that rates are “rising exponentially.”

In about half the positive cases under investigation, the patients had no idea where they were infected, she said. Local health departments are tracking over 590 outbreaks that occurred in settings ranging from long-term care facilities to schools, factories and social gatherings.

Whitmer said part of the problem appears to be a growing fatigue with the virus and masks, adding that political rhetoric had “created a lot of confusion and unnecessary suspicion.”

“It does appear that Michiganders have started to let their guard slip,” she said, adding that she wasn't planning another stay-at-home order like the one imposed earlier this year. Back then, there was “uncontrolled community spread" and a shortage of personal protective equipment, and it wasn't as clear how helpful mask wearing could be, she said.

But the situation could worsen during the holiday season if people have their usual large family gatherings and socials, Whitmer said.

“It is killing us, it is jeopardizing our economy, threatening our health care system,” she said.

The governor also called on Congress and President Donald Trump to agree on a relief package for unemployed workers, small businesses and schools.

The Michigan Occupational Safety and Health Administration is stepping up scrutiny of Michigan businesses' policies on working remotely and will announce a new initiative next week to educate and seek compliance with guidelines for offices, Whitmer said.

The agency can require improvements and fine businesses up to $7,000 for requiring employees to report to work when they can do their jobs remotely, she said.

Anna Liz Nichols contributed to this report from Lansing, Michigan.

Nichols is a corps member for the Associated Press/Report for America Statehouse News Initiative. Report for America is a nonprofit national service program that places journalists in local newsrooms to report on undercovered issues.