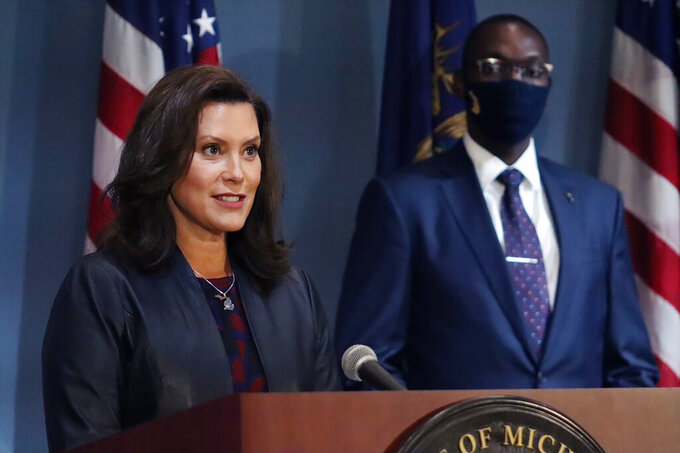 FILE - In this Tuesday, Sept. 2, 2020 file photo provided by the Michigan Office of the Governor, Gov. Gretchen Whitmer addresses the state during a speech in Lansing, Mich., heir status amid the coronavirus pandemic. Whitmer says gyms can reopen after 5 1/2 months of closure and organized sports can resume if masks are worn. She lifted some coronavirus restrictions Thursday, Sept. 3, 2020, that lasted longer in Michigan than in many other states. The order, effective next Wednesday, allows for reopening fitness centers and indoor pools in remaining regions that hold 93% of Michigan's population.(Michigan Office of the Governor via AP)

LANSING, Mich. (AP) — Gov. Gretchen Whitmer announced Thursday that gyms can reopen after 5 1/2 months of closure and additional organized sports can resume if masks are worn — lifting some coronavirus restrictions that lasted longer in Michigan than in many states.

The order, which takes effect next Wednesday, allows for the reopening of fitness centers and indoor pools in a swath of the state that is home to 93% of Michigan's population. They were allowed to open in June in northern Michigan, which is less densely populated, and now all will face 25% capacity limits. Face coverings will be required in all organized sports — except swimming — and inside gyms, including during exercise.

The governor, a Democrat whose state has seen nearly 6,800 deaths related to COVID-19, allowed athletic competitions to resume in regions where they have been restricted. Her administration released guidance, however, recommending against — but not prohibiting — sports involving more than occasional and fleeting contact: football, basketball, soccer, lacrosse, hockey, wrestling, field hockey, boxing and martial arts with opponents.

“Given the available epidemiological data and the timing as many schools and universities return to campus, contact sports pose a high risk of disease transmission to athletes, coaches and the general community, and should be avoided at this time,” the memo said.

Yet the Michigan High School Athletic Association, which had postponed football until the spring, quickly reinstated the fall season and said three other fall sports that were limbo in much of the state — soccer, volleyball, and swimming and diving — can start competition.

Whitmer did not reopen movie theaters statewide, though they have been allowed to open in the Upper Peninsula and many northern Lower Peninsula counties. Bowling alleys, roller rinks and ice rinks can open at 25% capacity but only for the sole purpose of serving as a venue for organized sports — not more general public use.

The governor urged school districts and athletic associations to follow the guidelines issued by the state health department, which reported 36 outbreaks related to sports teams, clubs, tournaments or gyms in August.

“Going forward, we will continue to work with health experts to assess the risk associated with business sectors that remain closed,” Whitmer said in a statement. Such operations include cinemas, performance venues, arcades, bingo halls, amusement and water parks, climbing facilities, dance areas and trampoline parks.

“For the health and safety of our families and frontline workers, it is crucial that we proceed thoughtfully and incrementally so we can measure the effects of today's actions before we take additional steps toward reengagement," the governor said.

Spectators will be limited at sporting events. Each athlete can designate up to two guests.

Whitmer, who later Thursday extended a state of emergency through Oct. 1, had faced pressure to ease her order. The state's per capita case rate over the past two weeks ranks 15th-lowest in the U.S., and deaths average 13 a day — having stabilized this summer after highs in the spring.

The Michigan Fitness Club Association, which led a Capitol rally in July, said gyms “are part of the solution to the COVID-19 pandemic, not the problem” — noting that obesity is a factor in chronic health conditions that increase risks for people infected with the virus. Last week, football players and parents held a “let them play” rally at the Capitol.

“I will not apologize for pushing, advocating, and questioning previous decisions about how the status of fall sports was handled,” Detroit school district superintendent Nikolai Vitti tweeted. “It was always about the players and families,” he said, before thanking Whitmer and the MHSAA “for listening and making the right decision in the end.”

The governor's extension of the emergency keeps intact various underlying orders limiting gathering sizes, requiring masks in enclosed public spaces and protecting the jobs of workers who are infected.