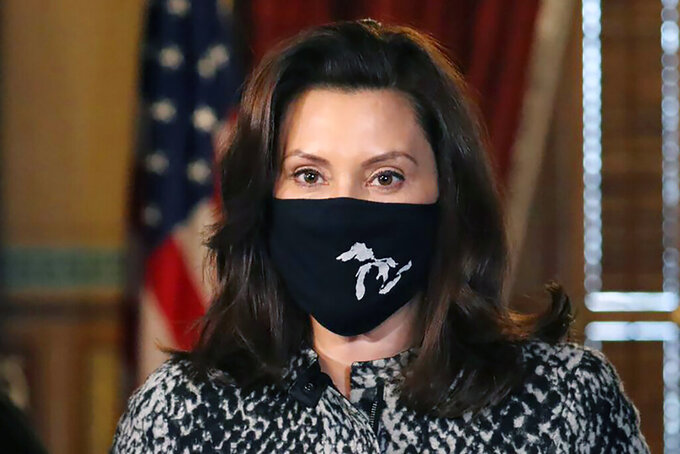 FILE - In this Dec. 18, 2020, file photo, provided by the Michigan Office of the Governor, Gov. Gretchen Whitmer addresses the state during a speech in Lansing, Mich. Gov. Whitmer will strongly encourage all K-12 schools in Michigan to reopen for in-person instruction by March 1, 2021, as the state starts offering the coronavirus vaccine to teachers. Two education officials briefed on the governor's planned announcement spoke to The Associated Press on the condition of anonymity ahead of a Friday, Jan. 8, 2021 afternoon news conference.(Michigan Office of the Governor via AP, File)

LANSING, Mich. (AP) — Gov. Gretchen Whitmer on Friday strongly encouraged all K-12 schools in Michigan to offer in-person instruction by March 1 and earlier if possible, but she stopped short of requiring it saying face-to-face classes should at least be an option.

Many schools, including in large districts such as Ann Arbor and Grand Rapids, have been fully remote during the coronavirus pandemic. Teachers and child care staff are among residents who will begin being vaccinated starting Monday as the state transitions to the next phase of its vaccine rollout. Vaccines were first offered to health care workers and nursing home residents.

“The value of in-person learning for our kids is immeasurable,” Whitmer said, adding it is safe if schools require masks and adopt infection-prevention protocols.

The Democratic governor last month lifted her administration’s temporary ban on in-person learning in high schools as a spike in COVID-19 infections receded.

In December, at least 800,000 public school students — 55% — were in districts that planned to offer only virtual instruction amid the surge, according to a study by Michigan State University. About 453,000, or 31%, were in districts with an option of full in-person learning. Others had hybrid or other setups.

Under a 2020 law, Michigan schools that deem it safe to provide face-to-face classes during the pandemic must prioritize the option for K-5 students. In urging schools to provide as much face-to-face teaching as possible, Whitmer especially noted its importance for students who are younger, economically disadvantaged, have disabilities or are English language learners.

“Many students and families have struggled with remote learning and need opportunities for face-to-face interaction with educators, even if it is a hybrid schedule to allow for smaller groups to gather,” she said.

The governor said she did not attempt to force schools to offer some in-person instruction because there are hundreds of districts and charter schools with differing circumstances. She also cautioned that a more contagious variant of the virus has arrived in the U.S.

The governor spoke a week before the scheduled expiration of a state health department order that has closed restaurants and bars to indoor dining and prohibited organized sports since November to curb the spread of the virus. The restrictions, which have helped to reduce hospitalizations, could be extended. Two key metrics — the case rate and the positivity rate — have increased in the past week.

House Appropriations Committee Chairman Thomas Albert, a Lowell Republican, said he could not envision starting talks with Whitmer over how to allocate newly authorized federal COVID-19 relief aid until she “shows more willingness to restore the economy and a sense of normalcy.” Michigan is among just a few states to allow no indoor restaurant dining, according to the Michigan Restaurant & Lodging Association.

Whitmer said the funding would pay for vaccinations, testing and other needs.

“It’s my hope that they’re not suggesting now we should start negotiating away public health measures to keep people safe and hold these things hostage, because there are a lot of people in our state struggling” she said. “This federal relief is necessary.”

The two-year legislative session begins next week, though it could be several weeks or longer before a supplemental budget bill is prepared.

The governor and Dr. Joneigh Khaldun, the state's chief medical executive, again urged patience as hospital systems and local health departments accelerate efforts to vaccinate people, including those age 65 and older. Michigan's rate of first doses per 100,000 residents, 1,565, ranked 10th-lowest in the country, according to data posted by the Centers for Disease Control and Prevention on Friday.

Whitmer said health systems and county departments have been asked to use their inventory within a week of receipt. She also said her administration was seeking federal approval so additional pharmacies — not just national chains CVS and Walgreens — can help to more quickly administer vaccines in nursing home and other long-term care facilities.