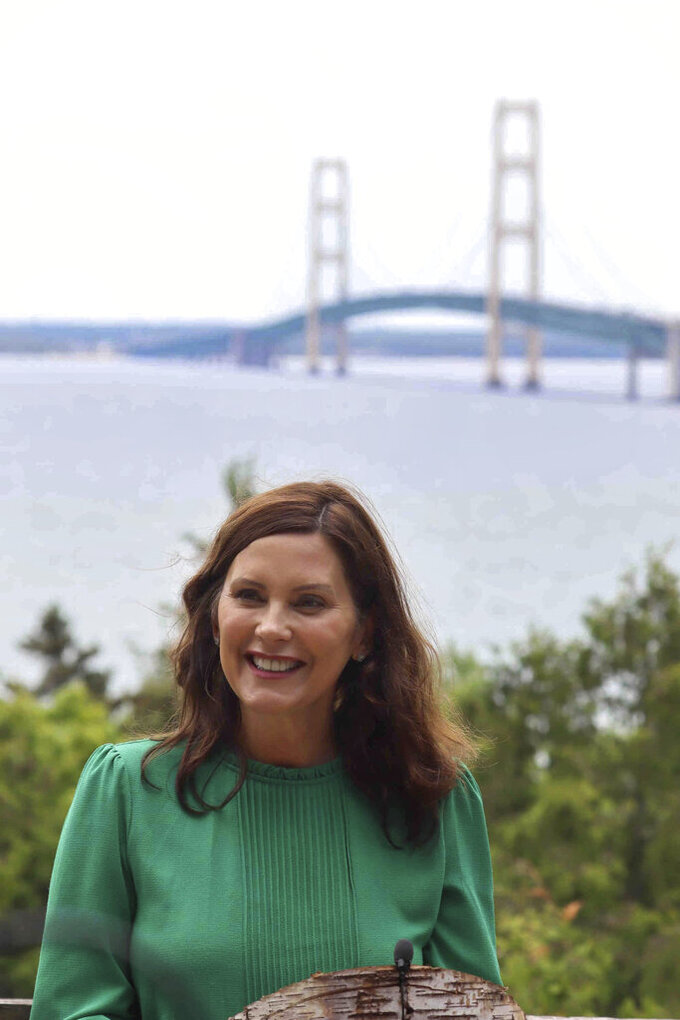 In this June 10, 2021 photo provided by the Michigan Office of the Governor, Gov. Gretchen Whitmer speaks at Straits State Park in St. Ignace, Mich., with the Mackinac Bridge behind her. Whitmer called for spending a "historic" $250 million in federal coronavirus relief aid to upgrade state parks and trails, a day after Senate Republicans announced a $1.5 billion plan to fix deteriorating local bridges across Michigan. (Michigan Office of the Governor via AP)

They were the latest proposals added to the mix as the Democratic governor and GOP-led Legislature consider how to use $6.5 billion in discretionary COVID-19 funding included in a rescue package enacted by Congress and President Joe Biden.

Whitmer said the pandemic disproportionately hit the tourism industry and hospitality sector, and that funds should be used to help tourism-reliant communities rebound. She pointed to a $264 million backlog of maintenance requests at 103 parks, which had about 35 million visitors last year, a 30% increase attributed to the coronavirus outbreak.

“I'm proposing a historic investment to tackle this backlog and to modernize our parks, to improve access, to preserve them for generations to come,” Whitmer said while announcing the proposal at Straits State Park in St. Ignace, near the Mackinac Bridge.

The outlay on state park infrastructure would be 12-fold the $20 million in average annual capital spending over the past five years, according to the Department of Natural Resources.

“These are places that we've all come to love. Investing in this way is generational," said Clay Summers, executive director of the Michigan Recreation and Park Association.

Under the GOP plan, the state would direct $1.5 billion in federal funding to rehabilitate or replace more than 400 locally owned bridges — quintuple what the governor proposed in her budget, which was presented before the influx of U.S. aid.

It is “good spending, because it's going to last 50, 60, 70 years,” said the lead sponsor, Republican Sen. Wayne Schmidt of Traverse City. “It's not partisan. ... This has been (a) long time brewing. This is the kind of stuff we need to get done.”

The Biden administration has authorized states and local governments to use recovery funds to maintain or build new transportation infrastructure, but only to replace tax revenue lost due to the pandemic. Michigan has a multibillion-dollar surplus due to federal stimulus checks and other support, however, putting the Senate plan in doubt. Just Thursday, the nonpartisan House Fiscal Agency said May revenues were $1 billion higher than expected.

“We understand and agree with the priority of investing in our bridges and look forward to working with members on this important issue as we work through the budget office,” state budget director Dave Massaron said in a statement. “We will need to review the proposed investment for (American Rescue Plan) compliance as we do for any federal funds.”

Schmidt was unconcerned about federal restrictions preventing the money from going to bridges.

“We can find a way to do this,” he said, noting there was a reduction in fuel tax revenue and contending that residents want their bridges fixed. “And look at the good-paying jobs it creates. ... Michigan families, businesses, taxpayers get something — pun intended — concrete.”