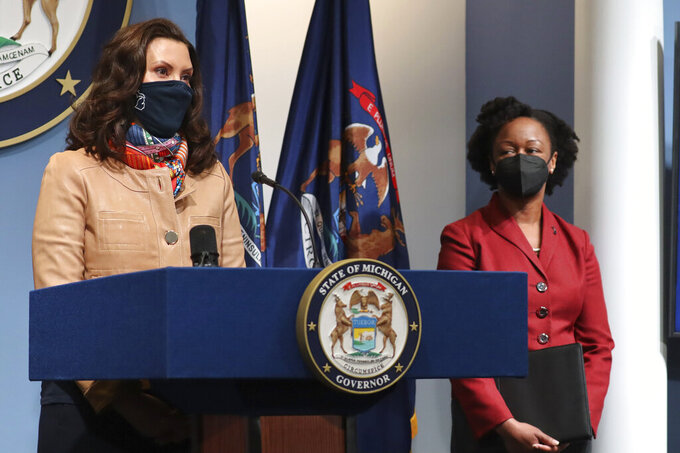 In this photo provided by the Michigan Office of the Governor, Gov. Gretchen Whitmer addresses the state as Michigan Department of Health and Human Services Chief Medical Executive Dr. Joneigh Khaldun, right, listens in on Friday, April 9, 2021, in Lansing, Mich. Faced with the country's highest rate of new coronavirus infections, Whitmer on Friday urged a two-week suspension of in-person high school classes, all youth sports and indoor restaurant dining. (Michigan Office of the Governor via AP)

She stopped short of ordering restrictions, instead asking for voluntary compliance to slow the spread of COVID-19.

High schools should shift to virtual learning, both school and non-school youth sports should be paused, people should choose outdoor dining or takeout instead of indoor seating, and they should avoid gathering with friends indoors, she said.

“We have to do this together. Lives depend on it, ” Whitmer said during a news conference, again urging residents to be vaccinated. “We're going to have some tough weeks ahead. So I'm asking everyone — please, take this seriously."

The Democratic governor also renewed her call for the federal government to send additional vaccines. The administration of President Joe Biden will provide extra resources but not doses.

About 40% of the state’s residents ages 16 and older have gotten at least one vaccine shot, including 69% of those 65 and up. Chief medical officers of Michigan hospitals said vaccines are proving to be more than 99% effective in preventing illness, hospitalization and death. But they warned that variants are more contagious and deadly, and bringing more young people to the hospital.

As of Thursday, Michigan had the worst rate of new COVID-19 cases in the U.S. over the previous two weeks. Related hospitalizations had more than quadrupled in a month and were 90% of the statewide peak from a year ago, leading some hospitals to postpone non-emergency surgeries. The seven-day average of new daily deaths has been rising for two weeks.

“Because we are seeing so many cases a day, our public health system is overwhelmed,” said Dr. Joneigh Khaldun, the state's chief medical executive. “We are not able to get information on many cases, nor are we able to identify their close contacts.”

The governor has resisted reinstating past restrictions such as a stay-at-home order or bans on indoor dining, in-person instruction and youth contact sports that were criticized by Republican lawmakers. A mask requirement remains, as do capacity limits and caps on gathering sizes.

“It is less of a policy problem that we have and more of a compliance and variant issue that we are confronting as a state,” she said.

But she did not rule out future restrictions, saying nothing is off the table.

“At this point, we think it's important that people understand how very serious this moment is,” she said.

“Educators have been focused on doing what is best for our students' learning and social growth. We've relied on health experts to guide us on the safest way to do that and any shift from that or expectation that educators alone can make those decisions in not the right approach," said Robert McCann, executive director of the K-12 Alliance of Michigan, a coalition of superintendents.

An industry group for restaurants, which are open at 50% capacity, called the governor's recommendation “misguided.”

Republican lawmakers, who have fought restrictions, said they were encouraged that she did not tighten them. Despite the surge, House Speaker Jason Wentworth said Whitmer should remove remaining restrictions and “trust the people of this state to do the right thing for themselves and their families."

The Michigan High School Athletic Association said it would finish the boys and girls state basketball tournaments Friday and Saturday. The organization said spring sports all are outdoors and the spring season has the fewest contact sports.

“School districts will make local decisions for the coming weeks on spring sports based on local conditions and circumstances,” MHSAA executive director Mark Uyl wrote in a memo.